The 5 Most Memorable Moments in the History of the NFL 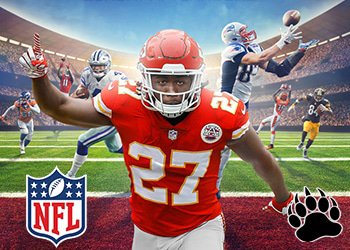 With so many memorable moments in the history of the NFL, how can you narrow them down to only feature the top 5 greatest moments? From improbable catches to the great dynasties, the heroic quarterbacks to the legendary coaches, the most notorious collapses to the most incredible comebacks, it's not an easy task to pinpoint the most unforgettable moments in the history of the NFL, but that's precisely what we set out to do.

We, therefore, decided to incorporate the NFL's greatest moments along with the top 5 largest bets placed in the history of the National Football League. The largest bets all occurred during a Super Bowl and each of them reached a $1 million or more.

Green Bay Packers vs Philadelphia Eagles - The 4th and 26 Game 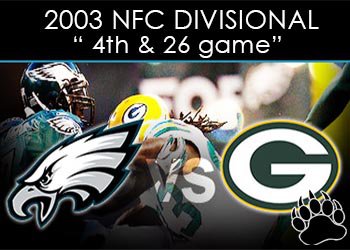 In 2003, the Eagle's season experienced an abrupt halt. During the Divisional Playoffs, the Philadelphia Eagles were trailing by 3 points against the Green Bay Packers in the final quarter. With just over a minute remaining in the game and a new set of downs, an incomplete pass was thrown by Donovan McNabb. Philadelphia was penalised before 2nd down for a false start and once play got underway, McNabb was sacked resulting in a loss of 11 yards. Now facing 3rd down along with 26 yards to get a first, another incomplete pass was thrown by McNabb. This required the Eagles to pick up 26 yards in a single play otherwise their NFL season was over. Green Bay was ready to celebrate at this point as it certainly meant an NFC Championship berth. However, McNabb provided the perfect throw to Freddie Mitchell, leading to a 28-yard gain. David Akers kicked a field goal and another during overtime to seal the win for the Philadelphia Eagles.

Even though the Green Bay Packers didn't make it past the Divisional Playoffs in 2003, they did manage to make headlines in 2011 when they played against the Pittsburgh Steelers at Super Bowl XLV. What makes this Super Bowl so significant is the fact that Birdman Williams, the co-founder of Cash Money Records, placed an insanely large bet of $1 million on Green Bay Packers (-3) purely because his friend Lil Wayne is a massive Packers fan. After the Green Bay Packers won Super Bowl XLV, Birdman tweeted that he just cashed in a mil. Although you might not have $1 million to wager on your favourite NFL team, you can still bet and make a profit at Pinnacle Sports on a wide selection of betting markets.

Philadelphia Eagles vs New York Giants - Miracle in the Meadowlands 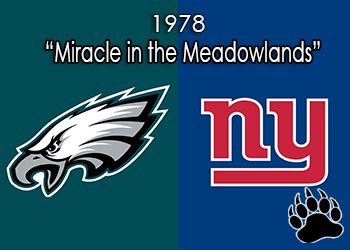 In 1978, with the clock ticking down during the fourth quarter of the game, most teams would have simply kneeled the ball to run down those final few seconds of the game, especially against their biggest rivals. Instead, the New York Giants decided to attempt a run against the Philadelphia Eagles, resulting in an unforgiving outcome. Joe Pisarcik, quarterback to the New York Giants, tried to hand the ball to Larry Csonka, but unfortunately, the ball fell to the ground and was scooped up by Herman Edwards, cornerback to the Philadelphia Eagles, who sprinted 26 yards to the end zone to win the game. The 1978 Miracle at the Meadowlands completely changed the season for both teams as well as the way teams handle the last few seconds in a game.

In 2012, after learning a great deal from their previous mistakes, the New York Giants made it to Super Bowl XLVI to play against the New England Patriots. With Birdman still feeling high from the Green Bay Packers win, he decided to pledge a $5 million bet on the New England Patriots and challenged anyone to match his bet. Although he couldn't match the same amount, 50 Cent was the only person to answer his call and placed a $1 million bet on the New York Giants at +2.5. The underdogs went on to win the game, leaving Birdman to rethink he's outrageous NFL bets going forward. 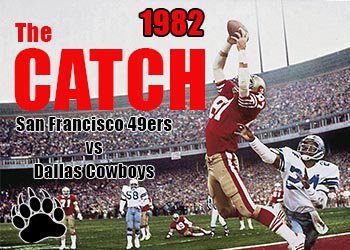 In 1982, during an NFC Championship game between the Dallas Cowboys and the San Francisco 49ers, the Cowboys had a 27-21 lead with only minutes left on the clock and knew the 49ers had to drive a total of 89 yards to score a touchdown and win the game. Joe Montana managed to lead the 49ers down the field, ending up on the Cowboys 6-yard line with just under a minute left in the game.

On a 3rd and 3, Montana initially wanted to throw the ball to Freddie Solomon but was unfortunately covered too well, so he had to scramble around, avoiding the Cowboys pass rush, and locate another target. Fortunately, Dwight Clark worked his way towards to rear end zone, and Montana successfully made a pass that only Clark could catch. Clark jumped high into the air and barely got his fingers on the ball to score the winning touchdown. The 49ers went on to win Super Bowl XVI against the Bengals that same year.

In 1989, the Cincinnati Bengals sought revenge against the 49ers, while the 49ers were aiming to become the 2nd team to win 3 Super Bowls in NFL history at Super Bowl XXIII. The championship game is remembered for Joe Montana's 92-yard touchdown drive during the final minutes of the play. However, in sports betting circles, it's widely recognised as the game that brought in a $1 million bet by gambling legend and casino owner Bob Stupak.

Bob Stupak, also referred to as Mr Vegas, bet a $1 million on the underdogs, taking 7 points from the favoured 49ers. It was considered the start of Stupak's best gambling years as he went on to win the gold bracelet at the World Series of Poker and the Caesar's Palace Super Bowl of Poker, all in the same year. Wish to wager on an NFL game yourself? See if you can 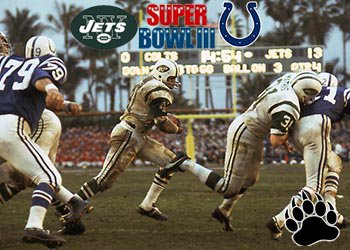 As far as memorable moments go in the history of the NFL; how could we not include the New York Jets' win against the Baltimore Colts at Super Bowl III? After two Super Bowl blowouts, no one considered the likelihood that the AFL would ever be competitive against the NFL. Most coaches and even commentators believed it would be years before the leagues successfully merge. The New York Jets, AFL Champions at the time, were considered the underdogs against the heavily favoured Baltimore Colts who were considered one of the greatest teams in the NFL.

Before the start of the game, Joe Namath received a heckle from a fan in front of the press to which he responded, "We will win the game, I guarantee it." It was a laughable statement before the start of the game, but after winning the game 16-7 and claiming the MVP award, Namath had the last laugh. Super Bowl III opened the doors for the two leagues to merge, legitimising the AFL, and leaving Namath as the most entertaining character both on and off the field. 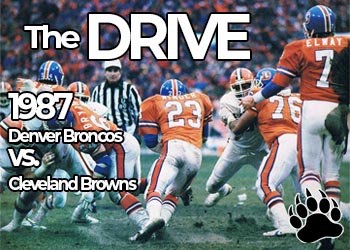 We invite you to visit our sports betting section where more articles and information on the most popular sports markets are available.