Home Articles Can you really win at Daily Fantasy Sports?

Can you really win at Daily Fantasy Sports? 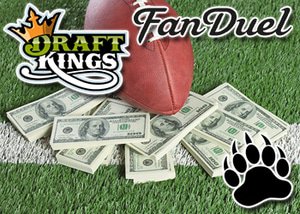 DraftKings and FanDuel both spent over $10 million on TV advertising in anticipation of the start of the NFL football season, but can you really win when you gamble online with Daily Fantasy Sports (DFS)?

If you watched any of the football over the weekend you no doubt saw all the ads for DraftKings and FanDuel. In fact, you were probably sick of seeing them. It turns out the DraftKings actually spent $20 million on ads that have been shown 5,800 times over the past week alone.

For those not in the know, DraftKings and FanDuel are the two biggest companies in daily fantasy sports. This sport is extremely popular with people risking anything from $5 to more than $100,000. The problem is that it is much harder to win than you might think.

If you've played regular fantasy sports then you are probably already aware of the rules. You create a team of players that you think will do well and if you players get better stats than your opponent, you win. Simple as that. The problem with DFS is that you could be playing against hundreds of people in large tournaments all with different payouts based on how much money people put in. Another thing is that it doesn't stretch over the whole season, it's actually just for one day.

The DFS ads show users who have won between $300 and $2 million with examples such as Scott H who said, "On my third week of playing, I won $15,000 of of a $5 entry." This testimonial was for FanDuel.

It's Harder To Win At Draft Fantasy Than You Think

According to a paywalled survey of 1,400 DFS players that Eilers Research shared with Tech Insider it was shown that 70% of players report losing money. These are casual players that are referred to as "fish" because the more advanced players - "sharks" feed on their losses. According to Bloomberg one such shark claims to risk about $140,000 every day with an 8% return on investment. This just goes to show what a big business fantasy sports has become.

Fantasy Football is valued at $11 billion according to Bloomber and DraftKings and FanDuel have both raised over $300 million. DraftKings have also announced that they will be holding a $15 million championship at the end of the year which will be broadcast on ESPN.

It is estimated that 3.9 million people will play DFS by the end of 2015 which is up from 1.2 milliion last year. This is according to a report by Adam Krejcik at Eilers Research. The data does however show that those looking to make money on DFS are placing a losing bet. Only a small portion of players actually take home the cash.

Data was taken from the first three months of the current Major League Baseball Season and Ed Miller and Dan Singer created a report that showed that in the first half of the 2015 MLB season, 91% of daily fantasy sports player profits were won by just 1.3% of players. According to Miller and Singer, the top 11 DFS players risked an average of $2 million in entry fees and profited $135,000 per person over the three months. The remaining people in the top 1.3% paid $9,100 and profited $2,400. Their data also went on to show that 5 percent of players are big fish; they lost $1,100 on entry fees of $3,600 on average. 80 percent of players were minnows; they lost $25 on entry fees of $49 average.

People close to the industry explained to Tech Insider that DFS is a game of skill and the best players dominate everyone else. The 5 percent of big fish in the group actually accounted for 75% of all the losses according to Miller and Singer. They went on to say that, "Each minnow loses less than $10 per month and may happily continue to play forever, but each big fish loses more than $4,000 per year and the entire DFS economy depends on these few players."

The Eilers Research analyst Adam Krejcik explained how the top players are exceptional in four main ways: They have the bankroll and will risk $100,000 a day in entry fees, they understand the statistics and can apply them, they also understand public perception and they know that to win big pools they have to find players who aren't widely owned but are still going to perform. Finally they have the time and commitment like this takes between 8 and 14 hours a day.

Some analysts see a lot of similarities between the people who excel in DFS and the top poker players from the poker boom in 2010 and 2011. According Chris Grove of Legal Sports Report, "The primary characteristic in both DFS and poker is the willingness to develop a comfort with data analysis," he says. A willingness to believe that there is a truth in the data, and the willingness to pursue that truth, and be willing to risk money on that truth."

So here's the bottom line, if you are trying to make real money playing Daily Fantasy Sports, the data says that you don't have the expertise to do so unless you are already a pro. The data shows that in a survey of 1,400 DFS players 70% weren't making money but over half of them said they love it and had no intentions of quitting.