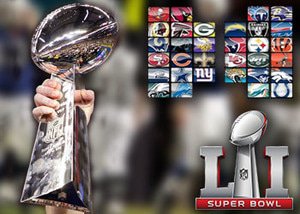 Super Bowl Sunday is almost here and to say we're excited is an understatement. All eyes will be on the NRG Stadium, Houston, Texas on the 5th of February for the 6.30 p.m. ET kickoff. The Patriots and the Falcons have earned the right to take the field in the Super Bowl, but who will have the edge? Are you ready to watch Tom Brady and Matt Ryan go head to head in the biggest Super Bowl ever? Super Bowl LI is getting closer and we can't wait to see who will come out on top!

The two teams going up against each other at this year's Super Bowl LI are the New England Patriots and the Atlanta Falcons. Who will take home the Vince Lombardi trophy, though? This is the New England Patriot's ninth Super Bowl Final and Sports Interaction has listed the Pats at the favourite. They secured their place after a win over the Pittsburgh Steelers in the AFC Championship Game. Tom Brady is their star quarterback.

The Atlanta Falcons booked their place in the final after a win over the Green Bay Packers in the NFC Championship Game of 44-21. This is their second Super Bowl after they lost the Super Bowl XXXIII to the Broncos, 34-19. Their star is quarterback Matt Ryan.

Neither team has met this season and the last time they went head to head was in 2013.

While it's true that the Conference Finals didn't start out well for a lot of gamblers out there, they did end up finishing on a high note. The majority of bettors in the NFC Championship preferred the underdog Packers to cover, and a great deal of Super Bowl betting odd bets were placed on the Cheeseheads to win outright against Atlanta. The Falcons ended up cruising to a 44-21 victory as 6-point favourites. Bettors, however, rebounded with the most popular bet in the NFL this entire season in the nightcap as the New England Patriots took victory over the Pittsburgh Steelers in an astounding win that placed them as 5.5-point favourites.

Betting on the biggest football game of the year can be overwhelming and there are hundreds of prop bets available. It's difficult to give recommendations on all of the Super Bowl betting odds but here are some that we recommend:

The Patriots remain the favourites to win the big game and the Super Bowl betting odds are Patriots -155, Falcons +125 at Bovada.

The Superbowl 2017 betting lines haven't moved since they were posted over a week ago. The New England Patriots remain the 3-point favourites over the Atlanta Falcons and given how much they have done for bettors this season, we don't see the betting public giving up on them now. Early action has pushed the juice on a Pats -3 bet to -115. At the moment we are seeing approximately 60 percent of all bets coming in on the Patriots and looking at predictions, 74 percent of the gambling public speculates that the game will go over the 59-point total.

Most Popular Prop Bets in 2017

When talking about Super Bowl betting, we really can't leave out the list of wild prop bets that come up. There are so many that it's impossible to list them all but let's take a look at some of the ones getting attention. Early prop betting favourites include odds on Lady Gaga's halftime performance, President Donald Trump, the Puppy Bowl, and pizza sales. There is also a prop bet on Tom Brady wearing a "Make America Great Again" hat after the game and this is currently priced at +2500. Other prop bets include Luke Bryan forgetting or omitting a word from the national anthem with Super Bowl betting odds of +400 for yes and -700 for no. Other popular prop bets include the team to record the most first downs, the first turnover of the game, total number of penalties, and if the Patriots win, will Brady, Belichick or Kraft be seen shaking Roger Goodell's hand on TV. You can view the full list of prop bets on any of the top sports betting sites.

Deflategate was a big controversy for the Patriots in 2015 when it was alleged that they tampered with footballs used in the AFT Championship Game against the Indianapolis Colts. Two years later and what should have ruined the New England Patriots has only made them stronger. A full investigation was held and punishment dished out to the Patriots. Brady was suspended for four games and the team fined $1m, but the team has come back stronger and better than ever and we don't foresee another deflategate for 2017.

The half-time show at the Super Bowl is something that every musician wants to perform at. It is one of the biggest stages with over 100 million Americans watching and much more around the world. This year Lady Gaga will headline the halftime show which is being called the Pepsi Zero Sugar Super Bowl Halftime Show. Lady Gaga performed an amazing rendition of the US national anthem, at the Super Bowl 50 in February 2016 and reports have been circulating that she wants to perform on the roof of the stadium. How that will be pulled off we have no idea. No further information has been leaked about the performance but behind the scenes, sneak peeks can be found on the PepsiHalftime website.

Bet On the Superbowl 2017 Winners

If you're planning to bet on the Superbowl 2017 winners the game kicks off on Sunday 5th February at 6.30 p.m ET. It's a good idea to stock up on snacks and of course visit your favourite online sports betting sites such as Bodog or Sports Interaction, for the best possible Super Bowl betting odds on the game. It's time to start planning those chicken and buffalo wings, guacamole, and even the slow-cooker chicken chilli for your half-time treat. If you don't feel like cooking be sure to order your pizza early. Pizza Hut had over $10 million in digital sales by halftime in Super Bowl 50.

If you're a first-time bettor on NFL be sure to check out our sports betting page where you will find all the information on NFL betting odds and lines as well as the top sports betting sites too.