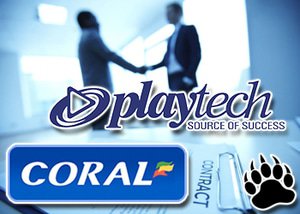 Playtech has taken the step forward in launching its first Virtual Sports product to more than 100 outlets owned by Coral. This release has the potential to be added to more than 1000 outlets over the course of 12 months. This was scheduled to be released at a later date but was ahead of its delivery schedule.

The new virtual reality online gambling product is a virtual reality accumulator that, via Linux hardware, is locally streamed and consists of matches that run for 90seconds and run concurrently in give minute intervals. It provides players arrange of game options per betting round and permits the viewing of a "feature Game" that also display game results.

The accumulator offers high definition quality that to date, is unable to be matched by any other on the market. It is both competitive, is a cost effective solution for in-shop retail environments and is locally managed by Playtech in order to have a reduced impact on the resources of operators. At this stage, it is in testing mode for a period of 3 months and will be added to another 100 shops owned by Coral before the end of August. If it proved to be a success, Coral will then expand this to 1000 shops nationwide. This will include Playtech doing so via a satellite broadcast via Coral TV.

The month of June saw Playtech offering one of the most realistic sport products geared towards virtual reality with a tennis game. This was released to all of its channels, devices and platforms. The release took over a year of development and included working closely with Universal Studios, modelling and 3D design implementation, much of which was carried out at the studios owned by Playtech in the U.K. The tennis game is about as close to the real thing that anyone has created and offers incredible gameplay and graphics. It Is also available online, via mobile, and in retail shops across the U.K.

Playtech, founded in 1999 has grown into a worldwide recognized gaming company and has employees in over 12 countries and employs over 5000 people. The company has an extensive range of gaming products that include casino games such as classic, video and progressive slots, table and video poker games, bingo, poker, sports betting, mobile, live dealer games, lottery, retail, social gaming and now, virtual reality games.

To date, Playtech is one of the top suppliers of online casino software for the gaming sector with more than 270 licensing its software across the world. This includes many of the most recognized brands such as Bet365, Paddy Power, Ladbrokes, Coral and William Hill.