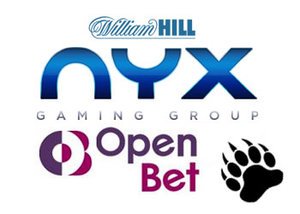 NYX has confirmed that they have sealed the deal on a £270 million acquisition of rival betting technology company OpenBet with a little bit of help from William Hill and Sky Betting.

NYX are a Toronto-listed online gambling technology company and they just announced that they have agreed to pay the full £270 million in cash to OpenBet's owners, hedge funders Vitruvian Partners LLP. They stated that they would partially fund the deal via an £80 million contribution from UK betting operator William Hill and a further £20 million from Sky Betting (SB&G).

With this deal William Hill, ranked #2 in the top ten largest online gambling companies for 2016, will also take an additional £10 million stake in NYX. They have drawn up a 10 year deal with NYX that will help to further develop Hill's sports betting, gaming, and retail platforms. This also includes the launch of a brand new platform that will appear within the next three years.

This new deal will allow NYX companies to offer a complete online gambling package to current and future clients. According to CEO Matt Davey, the natural union of his firm with OpenBet was born out of synergies in the product, the customer base, and more importantly, culture. NYX already provide casino games to the world's biggest and best performing operators with content from their in-house studios, and NYX companies including Nextgen Gaming, Side City, Icecap Studios, Cryptologic, and Ongame. They also have contracts with partners all over the world thanks to their OGS which includes Cryptologic, SHFL Entertainment, Sheriff Gaming, Amaya, iGaming2go, Microgaming Quickfire, and more. They supply over 600 games to 170 operators worldwide.

NYX have also announced that they are selling the European-facing portion of their poker business to "a partner with proven experience in the industry." They have however stated that they have retained a significant share of the new business as well as exclusive right to use the Ongame product in North America. NYX purchased Ongame back in November 2014.

It is thought that some of the UK betting operators may not be too happy with the idea of their sports betting technology being at least partially under the control of rival William Hill, but this acquisition did receive public support from Paddy Power Betfair, who are another OpenBet client. Paddy Power Betfair spokesman James Midmer said that his firm was "confident that the combined group will continue to deliver a great product and service."

A letter of intent has been signed by NYX Gaming Group to supply digital content to the Dutch National Lottery operator (de Nederlandse Staatsloterij / De Lotto). This agreement will see NYX provide player account management and digital gaming content and the letter of intent will secure their position in the market as soon as the country allows or legalizes online gaming.

The legalization of online gambling in the Netherlands is said to come into place by next year and it is expected to be widely introduced across the region. NYX has already stated the process of discussing online gaming services with De Lotto and Nederlandse Staatsloterij ahead of regulations being made legal.

From what we understand, Nederlandse Staatsloterij will use NYX's Open Platform System (OPS) for player account management and content distribution. They will be providing slots and scratch card games.

Matt Davey, NYX CEO stated that, "it's a privilege to be working with de Nederlandse Staatsloterij / De Lotto to bring NYX's OPS platform and our market leading content to their soon to be merged business. As one of the few gaming content and platform providers with World Lottery Association Membership, we are well positioned to work in partnership with national lotteries across the globe."