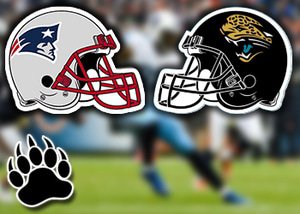 We are down to four division leaders and a total of 3 games that remain in the 2018 NFL postseason. The NFC and AFC Championship Games will feature 4 teams with incredible defenses that are ranked in the top 5 when it comes to scoring, and only one team that features a franchise quarterback who is perhaps the greatest in the NFL, that being Tom Brady playing for the New England Patriots. The other three quarterbacks include Philadelphia's Nick Foles, Minnesota's Case Keenum, and Jacksonville's Blake Bortles.

This weekend will provide even bigger spreads when compared to last weekend which can certainly turn out to be 4 games that are not-very-close at all. However, football works in mysterious ways and we rarely get what we expected to see. We at Grizzly Gambling did the necessary legwork and research to provide a helping hand in predicting the outright winner that will ultimately advance to Super Bowl 52. Our valuable insight on the two action-packed championship games will ensure you have the edge to place a bet on tomorrow's football matches.

The Divisional Round featured remarkable battles and unpredictable upsets that ultimately provided an entertaining weekend of football. The Minnesota Vikings were walking on cloud nine after their sensational 29-24 victory against the New Orleans Saints. The Vikings were trailing 24-23 against the Saints with only 10 seconds remaining, but thanks to an extraordinary catch by Stefon Diggs who managed to race down the sidelines and into the end zone, the Vikings secured their spot in the Conference Championship. The Philadelphia Eagles managed to provide an unpredictable 15-10 upset against the Atlanta Falcons on Saturday. It all came down to one play for the Falcons as they attempted to gain the lead over the Eagles. With only a minute remaining, the Falcons faced fourth-and-2 at Philadelphia's 2-yard line. With the match on the line, Atlanta ran a play with receivers cluttered in the end zone on one side. With absolutely no room, Ryan threw to Julio Jones that was unfortunately unanswered, giving the Eagles a spot in the Conference Championships.

The Pittsburgh Steelers entered the game as the favourites by at least a touchdown against the Jacksonville Jaguars. Unfortunately, the Steelers were a little too confident and trash talked the Jaguars prior to the start of the game. Surprisingly, the Steelers were completely unprepared for the Jaguars that beat them once already this season, and the weekend provided another 45-42 loss that ensured the Jaguars make it to the Conference Championships. Lastly, the Tennessee Titans plummeted against the New England Patriots, allowing Tom Brady to throw for 3 touchdowns while his defense sacked Marcus Mariota a total of 8 times in a spectacular 35-14 win. The Patriots are going to the Conference Championships for the 7th straight year.

The Minnesota Vikings will visit the Philadelphia Eagles at the Lincoln Financial Stadium in the NFC Championship Game. The Minnesota Vikings provided an electrifying 29-24 home win against the New Orleans Saints to claim their first NFC Championship match since 2009. Case Keenum displayed exceptional composure by collecting 318 passing yards with 1 touchdown against 1 interception. This is the first time Keenum will face the Philadelphia Eagles in his career. The hero in Sunday's victory was Stefon Diggs with an unbelievable 61-yard touchdown reception to win the game. He finished with a total of 137 receiving yards, and is now boasting with a touchdown in 4 consecutive games. The leading rusher for the Vikings was Latavius Murray who only managed 19 carries of 50 yards against the New Orleans Saints. The running back will have a difficult task against the Eagles' dominant rush defense this weekend. The offense of the Vikings had no issue in claiming yards against the defense of the Saints. However, they will be clashing against the best defense which they haven't faced all season. The Vikings scored 23.9 points on average during the regular season, positioning them in the 10th spot in the NFL.

The defense of the Vikings allowed 24 points during the second half against New Orleans, and managed to concede 358 yards in total. They produced 2 massive interceptions, including the one by strong safety, Andrew Sendejo, who is currently dealing with a concussion. The Vikings did manage to contain the strong running game of the Saints, and will be up against a much more powerful rushing game by the Eagles, highlighted by Jay Ajayi and LeGarrette Blount. The Vikings finished with the best total defense for the season as they held opponents to a 15.8-point average.

The Philadelphia Eagles are returning to the NFC Championship Game for the first time since 2008. Nick Foles started in quarterback position in place for the injured Carson Wentz, and managed to overcome a very slow start with an exceptional second half. He managed to complete 23 out of 30 passes for a total of 243 yards with no interceptions or touchdowns. Foles has accumulated 596 passing yards with 3 touchdowns and 1 interception in 2 career games against the Minnesota Vikings. Philadelphia didn't have a huge success on the ground while playing against the Falcons, only rushing for 96 yards while Jay Ajayi was leading with 15 carries on 54 yards. LeGarrette Blount only achieved 19 rushing yards, but he did contribute a rushing TD. Alshon Jefferey accumulated 61 receiving yards on 4 receptions last week. Jefferey has a total of 789 receiving yards for the season, and will probably be up against Xavier Rhodes. The defense of the Vikings has no visible weakness, but the best chance for the Eagles will be on the ground along with a few screen passes. Philadelphia averaged a total of 28.6 points during the regular season which ranked them third overall.

The defense of the Eagles was tremendous last week against the Falcons and Matt Ryan, and will need to produce a similar effort this weekend. The limited the Falcons to only 281 total yards while holding Ryan to 210 passing yards. The Eagles finished the regular season with the top rushing defense, and will be faced off against a strong running game from the Vikings. The Eagles allowed 18.4 points on average in the regular season, placing them 4th in the NFL.

The Spread: Vikings vs. Eagles

We are taking the points with the Philadelphia Eagles in this game. Their defense was exceptional last week against the Falcons and they will likely be able to neutralize the offense of the Vikings as well. They provide the best rush defense as they only allowed an average of 79 rushing yards per contest during the regular season, and held the running game of the Falcons at a mere 86 rushing yards this past weekend. Furthermore, they contained Matt Ryan and should be able to do the same with Case Keenum. In addition, the Eagles are playing at home, and the Eagles defense will play a major role in this game. It's also worth mentioning that the last 8 AFC and NFC Championship games have all been home victories.

The Jacksonville Jaguars are entering their first AFC Championship match since 1999. The Jaguars are boasting with a season-high of 45 points in their win against the Steelers last week Sunday. Blake Bortles played marvellously and collected 214 passing yards with 1 touchdown and zero turnovers. He was shaky during Wild Card weekend in Buffalo but was steady against the Pittsburgh Steelers. Leonard Fournette was remarkable in Sunday's victory, accumulating 24 carries on 109 rushing yards. Fournette performed far better as opposed to his 57-yard achievement during Wild Card weekend, and will likely have several carries again against the defense of the Patriots who will sacrifice yards on the ground. Wide receiver, Marqise Lee, was targeted 6 times by Blake Bortles against Pittsburgh and made 3 interceptions for 28 yards. He managed to accumulate 702 passing yards in a total of 14 games in the regular season. The Jaguars have the best running game with an average of 26.1 points, placing them 5th in the NFL.

The defense of the Jaguars experienced a difficult afternoon against the Steelers, giving up 545 total yards, as well as 469 passing yards. Jacksonville needs to be sharper in this game as they cannot rely on the offense to continue bailing them out. They do have one of the best defense units, as well as the best pass defense. They only allowed 16.8 points during the regular season, placing them 2nd in the NFL.

The New England Patriots are returning for the seventh consecutive season after destroying the Tennessee Titans this past Saturday. Tom Brady was once again tremendous as he accumulated 337 passing yards with 3 touchdowns and 0 interceptions. He now boasts with 66 touchdowns and 31 interceptions in 36 career playoff matches. The leading rusher for the Patriots against the Titans was Dion Lewis, accumulating 15 carries on 62 yards. Lewis collected 896 rushing yards with an average of 5 yards per carry this season. Danny Amendola experienced his best game of the season, collecting 112 yards on 11 catches. Amendola boasts with 659 receiving yards for the regular season. The Patriots are averaging 28.6 points, placing them 2nd in the NFL.

The defense of the Patriots was simply outstanding against the Titans last week, holding Tennessee to 267 total yards along with 8 sacks. New England won't allow Leonard Fournette to destroy them, and Matt Patricia and Bill Belichick will most likely use the same defense plan they used against Derrick Henry which was very successful last week. The Patriots are holding opponents to an 18.5-point average, placing them 5th in the NFL.

The Spread: Jaguars vs. Patriots

We are taking the Patriots in this game. The defense of the Jaguars gave up 45 points as well as 469 passing yards, and they are clashing against the unstoppable passing game of the Patriots. There's no defense that can stop Tom Brady, and we expect the 40-year old quarterback to provide his usual damage this weekend. In addition, we don't expect Jacksonville to have the same offense success as they experienced against the Steelers. Blake Bortles is extremely inconsistent, and he is going up against a team that accumulated 8 sacks against the Titans.

After an eye-opening Divisional Round, offering bettors non-stop action with remarkable battles and surprising upsets, you can be confident that this weekend will be unforgettable when it comes to football. Both these games will produce hair-raising action from start to finish as we finally find out who will advance to Super Bowl 52 on Sunday. There are loads of betting odds available on both these matchups, and we at Grizzly Gambling highly recommend visiting Sports Interaction who are currently ranked as Canada's most renowned and trusted online sports betting site. Another brilliant contender in the online sports betting industry is Bodog, providing truly competitive odds ahead of the Conference Games this weekend.

The NFL Conference Games will see bettors make their way to their favourite sportsbooks to place their bet on who will make it to the Super Bowl this year. We recommend browsing through our list of sports betting sites in Canada for a selection of accredited bookies. Now that you have all the knowledge you could possibly need surrounding the NFL Conference Games this weekend, pick your team and place a bet to walk away with stacks of cash.