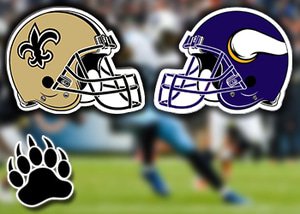 Week 19 will provide a truly captivating Divisional Round of the NFL Playoffs in 2018, and we at Grizzly Gambling got the latest round of NFL predictions and betting odds to assist you in preparing for the four battles of glory this weekend. As the Divisional Round kicks off on Saturday, we put together our NFL picks for the top 3 NFL games this weekend. Whether you are merely trying to figure out the winner or hoping to triple your life savings, we are here to help. We've put in the necessary time to ensure our picks are solid, but we cannot guarantee that all of them will be on the mark as the regular season, as well as the wild-card weekend, was filled with unpredictable upsets. However, the amount of research that went into each of our picks is sure to provide the edge you've been searching for to become a winner as you place your bets on the football sports betting action in week 19.

The first round of the NFL Playoffs in 2018 is in the books, and what an eventful round it was. Astonishingly, there were two upsets, leaving most of us to wonder what the Divisional Round will have in store for us as we inch closer to Super Bowl 52. Week 18 of the NFL provided stirring storylines and close contests. The Tennessee Titans conquered the Kansas City Chiefs 22-21, resulting in the Chiefs ending their season on Saturday afternoon. The Los Angeles Rams hanged their helmets this weekend after being destroyed by the Atlanta Falcons with a 13-26 score. The Buffalo Bills managed to keep a close game with the Jacksonville Jaguars but ultimately lost the battle on Sunday with the final score being 10-3. Lastly, the New Orleans Saints defeated the Carolina Panthers 26-31, making it the third time the Saints beat the Panthers this year.

We have an incredible NFC divisional playoff on Sunday afternoon, as the Minnesota Vikings face off against the New Orleans Saints at the U.S Bank Stadium. The New Orleans Saints will do everything in their power to advance to the NFC championships after a sensational 31-26 win against the Carolina Panthers in the Wild Card Round. Draw Bree's managed to throw for 376 yards, 1 interception, and 2 touchdowns on 23 out of 33 passing attempts, while Alvin Kamara was the top rusher with 10 carries for 23 yards and 1 touchdown. Mark Ingram added 22 yards on 9 carries, while Zach Line also managed to chip in his own rushing score against the Panthers. Michael Thomas was leading with 131 yards and 8 catches, Ted Ginn Jr. managed to add 115 yards and 4 catches along with 1 touchdown, while Josh Hill added 49 yards and 3 catches with a touchdown. New Orleans defense combined for a total of 4 sacks and gave up 413 total yards of offense to the Carolina Panthers.

The Minnesota Vikings enjoyed a much-needed bye to the divisional round where they finished 13-3 to claim the division which is the best record for the team since 1998. Case Keenum got the job as starting quarterback, throwing 3,547 yards on 325 out of 481 passing attempts, making it 67.6% completion for 7 interceptions and 22 touchdowns. Latavius Murray is leading the Vikings in rushing with 8 touchdowns and 842 yards, while Jerick McKinnon provided a great 1-2 punch with 3 touchdowns and 570 rushing yards. Adam Thielen is leading with 1,267 yards and 91 catches with 4 touchdowns, while Kyle Rudolph and Stefon Diggs each contributed 8 touchdowns. Everson Griffen is leading with 13 sacks while Harrison Smith contributed 5 interceptions to the Vikings defense unit that ranked in the top of the league with total points and yardage against per game with 15.8 points per game and 275.9 yards of total offense this season.

The Spread: Saints vs. Vikings

This game has the potential of being the match of the weekend as one of the top defense units will go against one of the best offense units in the NFL league. The Minnesota Vikings have the most success in this game, including the matchup in week 1 where they defeated the New Orleans Saints. The Vikings have also experienced loads of success while playing at home, but the New Orleans Saints have more experience in this type of scenario. Therefore, we will go with the Saints and take the free points this weekend.

Jacksonville Jaguars (11-6) at Pittsburgh Steelers (13-3): First Upset of the Week

The Pittsburgh Steelers will face the Jacksonville Jaguars at Heinz Field for the AFC Divisional Playoffs on Sunday evening. The Jacksonville Jaguars are returning after a wild-card win over the Bills and will hope to advance to the AFC Championship game for the first time since 1999. The Jaguars have lost the last 3 games on the road. Blake Bortles has completed 60.2% of his passes for thirteen interceptions and 21 TD's on 3,687 yards. Bortles has 1 or less touchdown passes in ten of his last fourteen games. Marqise Lee, together with Keelan Cole, have combined for six touchdowns and a total of 1,450 receiving yards, and Allen Hurns is sitting with 39 receptions. Jacksonville's running game is averaging 141.4 yards per game, while Leonard Fournette is leading with 1,040 yards and nine touchdowns. Defensively, the Jaguars are allowing 286.1 yards and 16.8 points per contest. Telvin Smith has 102 tackles, A.J Bouye has 6 interceptions, and Calais Campbell has a total of 14.5 sacks.

The Pittsburgh Steelers are fortunate as they haven't played since New Year's Eve and will look to make a conference championship appearance for the third time since 2010. The Steelers have won 5 of their last 6 games at home. Ben Roethlisberger has completed 64.2% of his passes for 14 interceptions and 28 touchdowns on 4,251 yards. Roethlisberger has 2 or more TD passes in his last 7 games. JuJu Smith-Schuster, together with Antonio Brown, have combined for 16 touchdowns and 2,450 receiving yards, while Le'Veon Bell is sitting with 85 receptions. Pittsburgh's running game is on average 104.2 yards per game, and Bell is leading with 1,291 yards and 9 touchdowns. Defensively, the Steelers are allowing 306.9 yards and 19.3 points per contest. Sean Davis has 92 tackles, Artie Burns has a total of 13 pass deflections, and Cameron Heyward has 12 sacks.

The Spread: Jaguars vs. Steelers

The Steelers and Jaguars met in week 5 at Heinz Field, and the Jaguars destroyed the Steelers with an impressive 30-0 win. Regardless of how talented Pittsburgh offense is, the Jaguars won't back down and we are confident that they possess the ability to win this matchup. However, the biggest issue is that the Steelers aren't the same team as they were in Week 5, winning a total of 10 games out of 11. Pittsburgh's offense is also clicking, and they are expecting Antonio Brown to return to the field, healthy and ready. Should the Steelers accumulate points on the board, we can't see how Blake Bortles will be able to keep up. We want to see the Jaguars advance to the Championships, but due to a weak quarterback, we must side with the Steelers winning by a touchdown.

The Philadelphia Eagles will clash against the Atlanta Falcons in the NFC Divisional Playoffs at the Lincoln Financial Field on Saturday evening. The Atlanta Falcons are returning after a wild-card win against the Los Angeles Rams and will hope for a back-to-back appearance at the NFC Championships. The Falcons have won 4 of their last 6 games on the road. Matt Ryan has completed 64.7% of his passes for 12 interceptions and 20 touchdowns on 4,095 yards. Ryan has 1 or less TD passes in his last 7 matches. Julio Jones, together with Mohamed Sanu, have combined for 8 touchdowns and 2,147 receiving yards, while Austin Hooper is sitting with 49 receptions. Atlanta's running game is averaging 115.4 yards per game, and Devonta Freeman is leading with 7 touchdowns and 865 yards. Defensively, the Falcons are allowing 318.4 yards and 19.7 points per contest. Deion Jones has 138 tackles, Robert Alford has a total of 20 pass deflections, and Adrian Clayborn has 9.5 sacks.

The Philadelphia Eagles haven't played a game since New Year's Eve and will look to make an NFC Championship appearance for the first time since 2008. The Eagles have won 7 of their last 8 games at home. Nick Foles has completed 56.4% of his passes for 2 interceptions and 5 touchdowns on 537 yards. Foles will enter the game with only 101 pass attempts. Zach Ertz, together with Alshon Jeffery, has 17 touchdowns and 1,613 receiving yards combined, while Nelson Agholor is sitting with 62 receptions. Philadelphia's running game is on average 132.2 yards per game, and LeGarrette Blount is leading with 2 touchdowns and 766 yards. Defensively, the Eagles are allowing 306.5 yards and 18.4 points per contest. Nigel Bradham has 88 tackles, Patrick Robinson has 4 interceptions, and Brandon Graham has a total of 9.5 sacks.

The Spread: Falcons vs. Eagles

We are actually very surprised that the Eagles are considered the underdog in this matchup, making the number 1 seed an underdog for the first time in a playoff game. We understand Philadelphia isn't the same team without Carson Wentz, but the Eagles have the two most important factors for success in any playoff game, including defense and running game. The Eagles are an exceptional team without considering the home crowd and their rest. On the other hand, the Falcons have been a miss or hit team all season and didn't excel against the Rams last weekend either. We like Philadelphia in this spot, and therefore we are siding with the Eagles to win the game by at least a touchdown.

After a truly theatrical Wild Card Weekend, providing two unpredictable upsets, you shouldn't be surprised if this weekend is just as crazy for the playoffs in the Divisional Round. One factor to consider during the divisional round is that all 4 games will feature a quarterback with Super Bowl experience, including Drew Brees, Matt Ryan, Ben Roethlisberger, and Tom Brady going up against teams who have no experience in such massive games. To take a closer look at the wide range of betting odds this weekend, you can visit Sports Interaction for all your betting needs. Another well-known sportsbook in Canada, to get competitive odds, include Bodog if you wish to compare odds between leading sports betting sites.

The Divisional Round is certainly going to see its fair share of wagers from around the world, ranging from possible upsets to increase their returns to safer bets on guaranteed wins. However, keep in mind that anything is possible in the NFL as we've seen in the regular season. The best way to prepare yourself for the betting action this weekend is to look at our informative sports betting in Canada articles to assist you in every aspect of football betting if you are still a newcomer to the online betting world. Now that you're clued up on the most exciting football matches this weekend take our predictions and head over to one of our top sports betting sites to place your winning wagers.