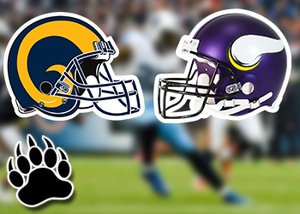 It's hard to believe that we're already more than halfway through the 2017 NFL season. We've witnessed madness arise on a weekly basis, with plenty of heroic play from unexpected heroes and unlikely contenders emerging. It's exactly what you want from the NFL, excluding the shocking amount of incompetent offenses. Regardless, it's Week 11 of the NFL and there's still plenty of football to look forward to. Equality could be nonexistent this week, providing a truly entertaining slate of upcoming matchups. While there are a couple of expected nail-biters in Week 11, including the powerful NFC showdown between the Minnesota Vikings and Los Angeles Rams, or a divisional clash between the Dallas Cowboys and Philadelphia Eagles, many other matchups look to be blowouts. To assist you in making informed decisions, we at Grizzly Gaming have put together three of the most interesting upcoming games for Week 11. We are not guaranteeing that we've hit the nail on the head with each of them, but you can rest assured that we did the necessary legwork and research with our football sports betting action in week 11.

Outrageous blowouts, overtime battles, last-second field goals, and wins on the road were all part of an enjoyable Week 10 of the NFL. Great teams won most of their games, but they had to work quite hard to do so. However, this certainly wasn't the most exhilarating week on paper. The only matchup between teams with winning records was the game between the Saints and the Bills, and for a while, this was the only blowout. But, just as we expected, things got a little strange. The Steelers were lifeless for most of the game against the Indianapolis Colts, but they managed to come back and claim the win on a last-second field goal. The Detroit Lions were close to losing against the Browns until the 4th quarter rolled around, allowing the Lions to pull away with a win. But the strangest game was the Jacksonville Jaguars overtime win against the Los Angeles Chargers. The ending was filled with dumb penalties and turnovers. The 49ers managed to get their first win for the 2017 season, and the New York Giants continue to look worse every week. The same goes for the Broncos who somehow rolled over against the New England Patriots on Sunday night.

The Minnesota Vikings and the Los Angeles Rams will meet at the U.S Bank Stadium for Sunday evening NFL action. The Los Angeles Rams will look for their fifth straight victory to continue building on their sensational lead in the NFC West division. The Rams have won 5 of their last 8 road games. Jared Goff has completed 61.2% of his passes for 2,385 yards, 4 interceptions, and 16 touchdowns. Goff has zero interceptions and 7 touchdown passes in his last 3 games. Cooper Kupp, along with Robert Woods, have 1,039 receiving yards combined with 7 touchdowns, while Todd Gurley is sitting with a total of 35 receptions. The Rams ground game is on average 128.8 yards per game, and Todd Gurley is leading with 754 yards and 7 touchdowns. Defensively, the Los Angeles Rams are allowing 322.1 yards and 18 points per game. Nickell Robey-Coleman has 2 interceptions, Aaron Donald has 5 sacks, and Mark Barron is leading the Rams with 63 tackles.

The Minnesota Vikings will also look to build on their 5-game winning streak and their incredible lead on the NFC North division. The Vikings have won 5 of their last 6 home games. Case Keenum has completed 64.9% of his passes for 1,914 yards, 5 interceptions, and 11 touchdowns. Keenum has 4 interceptions and 6 touchdown passes in his last 3 games. Stefon Diggs, along with Adam Thielen, have 1,293 receiving yards and 7 touchdowns combined, while Kyle Rudolph has a total of 37 receptions. The Vikings ground game is on average 118 yards per game, and Dalvin Cook is leading with 354 yards and 2 touchdowns. Defensively, the Minnesota Vikings are allowing 294.3 yards and 18.3 points per game. Harrison Smith has 3 interceptions, Everson Griffen has 10 sacks, and Eric Kendricks is leading the Vikings with 71 tackles.

The Spread: Rams vs. Vikings

It's extremely easy to choose either one of these brilliant teams, as both are in great form. Both these teams have great offenses and terrific defenses that have been consistently placing points on the board of late. The game will likely be determined by which offensive line manages to hold up more, as both these defenses are best at sacking the quarterback to create game-changing plays. At the end of the day, the Los Angeles Rams are the more consistent team, and we trust Goff and his team's offense to have much more success when compared to Keenum and his banged-up weapons. Goff is on a different level for most of the 2017 season, while Keenum has only made great plays the last few weeks. It's for this reason that we are siding with the Rams on Sunday.

Philadelphia Eagles (8-1) at Dallas Cowboys (5-4): First Upset of the Week

The Dallas Cowboys and the Philadelphia Eagles are meeting at the AT&T Stadium for NFL action on Sunday night. The Philadelphia Eagles will want to continue building on their incredible 7-game winning streak to completely run away in the NFC East division. The Eagles have lost 8 of their 11 games on the road. Carson Wentz has completed 60.5% of his passes for 2,262 yards, 5 interceptions, and 23 touchdowns. Wentz has 2 or more touchdown passes in 5 straight games. Alshon Jeffery, along with Zach Ertz, have 1,028 receiving yards combined with 11 touchdowns, while Nelson Agholor boasts with a total of 29 receptions. The Eagles ground game is on average 136.8 yards per game, and LeGarrette Blount is leading the way with 2 touchdowns and 504 yards. Defensively, the Philadelphia Eagles are allowing 315.9 yards and 19.9 points per game. Jalen Mills has 3 interceptions, Brandon Graham has 5 sacks, and Nigel Bradham is leading the Eagles with 50 sacks.

The Dallas Cowboys desperately need a victory this weekend after splitting their last 8 games. The Cowboys have managed to win 9 of their last 11 games at home. Dak Prescott has completed 63.3% of his passes for 1,994 yards, 4 interceptions, and 16 touchdowns. Prescott has zero interceptions and 2 touchdown passes in his last 3 games. Jason Witten, along with Dez Byrant, has 856 receiving yards and 7 touchdowns combined, while Terrance Williams has a total of 31 receptions. The Cowboys ground game is on average 143.6 yards per game, and Ezekiel Elliott leads with 789 yards and 7 touchdowns. Defensively, the Dallas Cowboys are allowing 325.9 yards and 22.8 points per game. Byron Jones has 1 interception, DeMarcus Lawrence has 11.5 sacks, and Jaylon Smith is leading the Cowboys with 53 tackles.

The Spread: Eagles vs. Cowboys

We are all for taking a great team along with the free points, especially when playing at home. However, there's a couple of things that are working against the Dallas Cowboys this weekend. The Dallas Cowboys are simply not the same competitive team without Ezekiel Elliott, and their offensive line was heavily abused when they played against the Atlanta Falcons, giving up 8 sacks, including 6 to one player. In addition, the Cowboys might be without their quarterback as he's hurt with a hamstring injury. The Eagles, on the other hand, are one of the most consistent teams over the last 2 months and had an extra week to fully prepare for this matchup. Wentz looks like an MVP candidate, and the Philadelphia Eagles defense has managed to force a total of 16 turnovers in 9 games.

The Green Bay Packers and the Baltimore Ravens are meeting at the Lambeau Field on Sunday afternoon for NFL action. The Baltimore Ravens require a win after losing 5 of their last 7 games to return to a .500 record. The Ravens have lost 9 of their last 11 games on the road. Joe Flacco has completed 64.3% of his passes for 1,551 yards, 10 interceptions, and 8 touchdowns. Flacco has 1 or less touchdown passes in 6 of his last 7 games. Mike Wallace, along with Jeremy Maclin, have 577 receiving yards and 5 touchdowns combined, while Benjamin Watson has a total of 38 receptions. The Ravens ground game is on average 120.9 yards per game, and Alex Collins is leading with 521 yards on a total of 93 carries. Baltimore's defense is allowing 310.6 yards and 19 points per game. Eric Weddle has 3 interceptions, Terrell Suggs has 5.5 sacks, and C.J Mosley leads the Ravens with 76 tackles.

The Green Bay Packers will pursue a back-to-back victory to remain in the playoff battle until Aaron Rodgers makes a return. The Packers have won 6 of their last 8 games at home. Brett Hundley has completed 61.5% of his passes for 701 yards, 4 interceptions, and 2 touchdowns. Hundley will be entering the game with only 132 career pass attempts to his name. Randall Cobb, along with Davante Adams, has 865 receiving yards and 7 touchdowns combined, while Jordy Nelson has a total of 33 receptions. The Packers ground game is on average 105.4 yards per game, and Aaron Jones is leading with 370 yards and 3 touchdowns. The Green Bay Packers defense is allowing 353.6 yards and 23 points per game. Damarious Randall has 3 interceptions, Nick Perry has 7 sacks, and Blake Martinez is leading the Packers with 76 tackles.

The Spread: Ravens vs. Packers

Other than Brett Hundley's status suffering a hamstring injury, but will still likely play this weekend, we are not completely sure why the Baltimore Ravens are the favourites in this matchup. Although the Ravens had an extra week to prepare, they remain a subpar team regardless of how you look at it. Other than blowing out the Dolphins, the Baltimore Ravens haven't done much over the last 2 months to truly inspire confidence. The Green Bay Packers looked extremely sharp last week, as Brett Hundley managed to play the best game of his football career. The Packers are certainly the more superior team this weekend with or without Aaron Rodgers. Therefore, we are going with the Packers to win the game outright.

Week 11 is going to be another week filled with sensational football from Thursday to Monday, so you can expect to see both professional bettors and average Joes placing a bet on a couple of interesting matchups this week. Apart from the three intriguing games we included this week, you can also view the other games at Sports Interaction. If you are searching for another top-notch sport betting site, offering competitive betting odds on all NFL matchups, look at Bet365.

If this is going to be your first online betting experience on any of the upcoming NFL games, we highly recommend that you first brush up on sports betting in Canada. This will quickly get you on the right track in terms of reading betting lines, understanding payout potential, and how to make a bet through any of our recommended sport betting sites. Now that you have everything you need for the NFL action this week, take our predictions into consideration, and place your bets on the teams you think will come out on top.