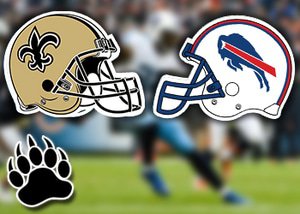 There are plenty of close games projected for week 10 of the 2017 NFL season, and it's becoming clearer and clearer who the pretenders and the contenders are this year. As we head into week 10, four NFL teams are favoured by at least one touchdown, such as Detroit Lions (vs. Cleveland Browns), Pittsburgh Steelers (at Indianapolis Colts), Carolina Panthers (vs. Miami Dolphins), and New England Patriots (at Denver Broncos). However, there are loads of other matchups anticipated to be closer than a field goal, including New Orleans at Buffalo, Minnesota at Washington, and New York Giants at San Francisco. This time of the year, you will see teams start to eliminate themselves from playoff contention, so make sure you tune in for Week 10 of NFL action. We at Grizzly Gaming continue to do the necessary research to provide you with informative predictions and early point spreads so that you can make an educated betting decision on the football sports betting action in week 10.

NFL football is fundamentally a violent sport, but outright fights are extremely rare. That's why Week 9 of the NFL was so unusual, as brawls blemished a total of three games along with 5 players getting ejected, an amount that most believe was too low. The disqualifications included Cardinals' Haason Reddick and Frostee Rucker, 49ers' Carlos Hyde, Jaguars' Jalen Ramsey, and Bengals' A.J Green. Week 9 was also filled with surprise teams in the NFC, making it known that they are here to stay. Most figured that the Cowboys and Seahawks would be in the most dangerous part of the playoff race, but over the past month, both teams have rounded into form. The rise of the Saints, Rams, and Eagles to contender status have also snuck up on fans though, and the beatdowns in week 9 by all three teams severed as a clear reminder of how each team got to this point and why they won't go away. Will week 10 have more unexpected surprises in store for us?

The Buffalo Bills and the New Orleans Saints are meeting at the New Era Field for NFL action on Sunday evening. The New Orleans Saints will want to continue building on their unbelievable six-game winning streak. The Saints have won 3 straight road games. Drew Brees has completed 71.6% of his passes for 2,214 yards, 4 interceptions, and 13 touchdowns. Brees has 2 or more touchdown passes in 5 of his last 7 games. Ted Ginn Jr. and Michael Thomas have combined for 1,025 receiving yards and 5 touchdowns, while Alvin Kamara has a total of 37 receptions. The ground game of the New Orleans Saints is on average 122.8 yards per game, and Mark Ingram is leading the way with 541 yards and 4 touchdowns. Looking at the defense, the Saints are allowing 326.6 yards and 19.4 points per game. A.J Klein is leading the Saints with 41 tackles, Kenny Vaccaro has 3 interceptions, and Cameron Jordan has 7 sacks.

The Buffalo Bills will look for a win while staying undefeated at home after winning 4 of their last 6 games overall. The Bills have won 6 of their last 8 home games. Tyrod Taylor has completed 65.3% of his passes for 1,628 yards, 2 interceptions, and 10 touchdowns. Taylor has 1 or less TD passes in 5 of his last 7 games. LeSean McCoy and Charles Clay have combined for 500 receiving yards and 2 touchdowns, while Jordan Matthews has a total of 21 receptions. The ground game of the Buffalo Bills is on average 116.9 yards per game, and McCoy is leading the way with 546 yards and 3 touchdowns. Looking at the defense, the Bills are allowing 344.6 yards and 18.6 points per game. Preston Brown is leading the Bills with 64 tackles, Micah Hyde has 5 interceptions, and Jerry Hughes has 3 sacks.

The Spread: Saints vs. Bills

This should be a very entertaining game between two teams that have exceeded expectations regardless of how things turn out down the stretch. With that in mind, we are siding with the Bills and the points at home. The Buffalo Bills enjoyed a mini bye week after playing on Thursday last week, giving Zay Jones, E.J Gaines, and Clay a chance to recover and get back on the field. The weather will also be a contributing factor, as the Saints are essentially a dome team that are used to playing half of their games with no major issues, and the weather is expected to be in the low 40s with rain predicted on Sunday evening. That favours the Bills and their physical style of play. The New Orleans Saints have also had loads of luck facing subpar or backup quarterbacks, which will certainly not be the case this time round.

Pittsburgh Steelers (6-2) at Indianapolis Colts (3-6): First Upset of the Week

The Indianapolis Colts and the Pittsburgh Steelers are meeting at the Lucas Oil Stadium on Sunday evening for NFL action. The Pittsburgh Steelers would want to build on their current three-game winning streak and extend their lead in the AFC North division. The Steelers have won 3 straight road games. Ben Roethlisberger has completed 61.1% of his passes for 2,062 yards, 9 interceptions, and 10 touchdowns. Roethlisberger has 1 or less TD passes in 5 of his last 6 games. JuJu Smith-Schuster and Antonio Brown have combined for 1,259 receiving yards and 7 touchdowns, while Martavis Bryant has a total of 18 receptions. The ground game of the Steelers is on average 108.9 yards per game, and Le'Veon Bell is leading the way with 760 yards and 5 touchdowns. Looking at the defense, the Steelers are allowing 268.6 yards and 16.4 points per game. Ryan Shazier is leading the Steelers with 65 tackles, Mike Hilton has 1 interception, and Cameron Heyward has 5 sacks.

The Indianapolis Colts will look for back-to-back victories on Sunday for this first time this season to remain in the AFC wild-card discussion. The Colts have split their last 10 games at home. Jacoby Brissett has completed 61.1% of his passes for 1,950 yards, 4 interceptions, and 7 touchdowns. Brissett has 4 touchdown passes and 1 interception in his last 2 games. Jack Doyle and T.Y Hilton have combined for 1,143 receiving yards and 5 touchdowns, while Donte Moncrief has a total of 19 receptions. The ground game of the Indianapolis Colts is on average 98.7 yards per game. Frank Gore is leading the way with 455 yards and 2 touchdowns. Looking at the defense, the Colts are allowing 393.6 yards and 28.9 points per game. Jonathan Bostic is leading the Colts with 63 tackles, Malik Hooker has 3 interceptions, and Jabaal Sheard has 4.5 sacks.

The Spread: Steelers vs. Colts

The Pittsburgh Steelers are obviously the more superior team here, had an extra week to prepare, and boast with a defense that only allowed 15 points or less in 4 of their last 5 games. The Colts defense is still rather beat up and have been waxed in almost every game this season. The Steelers are healthy, the Colts defense is struggling, and they are playing in a fast track dome with no concerns when it comes to weather conditions. The Pittsburgh Steelers should have a score of 30 points or more, and the offense of the Colts had a few impressive moments in week 9 against the Texans, so there's going to be some fireworks in this game on Sunday.

The Detroit Lions and the Cleveland Browns are meeting at the Ford Field on Sunday evening for some NFL action. The Cleveland Browns will look for their first victory in the 2017 NFL season. The Browns haven't won any road games since October 2015. DeShone Kizer has completed 52.1% of his passes for 1,144 yards, 11 interceptions, and 3 touchdowns. Kizer has 0 touchdown passes and 4 interceptions in his last 4 games. Ricardo Louis and Duke Johnson Jr. have combined for 616 receiving yards and 1 touchdown, while David Njoku has a total of 18 receptions. The ground game of the Cleveland Browns is on average 95.1 yards per game, and Isaiah Crowell is leading the way with 351 yards and 5 touchdowns. Looking at the defense, the Browns are allowing 313.5 yards and 25.3 points per game. Joe Schobert is leading the Browns with 71 tackles, Jason McCourty has 3 interceptions, and Myles Garrett is 4 sacks.

The Detroit Lions will look for back-to-back victories for the 2nd time this season that will allow them to get above a .500 record. The Lions have managed to win 7 of their last 11 games at home. Matthew Stafford has completed 62.4% of his passes for 2.212 yards, 4 interceptions, and 14 touchdowns. Stafford has 2 or more touchdown passes in 5 of his last 9 games. Marvin Jones Jr. and Golden Tate have combined for 1,077 yards and 7 touchdowns, while Theo Riddick has a total of 29 receptions. The ground game of the Detroit Lions is on average 79.8 yards per game, and Ameer Abdullah is leading the way with 417 yards and 2 touchdowns. Looking at the Lions defense, they are allowing 341.7 yards and 24.1 points per game. Tahir Whitehead is leading the Lions with 44 tackles, Darius Slay has 3 interceptions, and Anthony Zettel has 5 sacks.

The Spread: Browns vs. Lions

The Cleveland Browns will be coming off a bye week while the Detroit Lions will be playing on a short week, so the Browns will have a huge advantage as the road team. However, it's the Cleveland Browns we are discussing here, and they are considered one of the worst teams this season. The Browns haven't won a game in almost a year, haven't won a game on the road in more than 2 years, and are unable to cover games even though they are big underdogs almost every week. The Cleveland Browns have lost 50% of their games by double digits and scored 17 or less points in 5 straight games. Therefore, we will take the Lions at home, winning by double digits.

Week 10 of the NFL season should be another explosive weekend filled with huge scores, surprises, and loads of unpredictable upsets. There will be NFL action from Thursday through to Monday, so make sure to check out the range of other brilliant matchups at Sports Interaction. In addition, if you are searching for another reputable online sportsbook in Canada, featuring competitive odds for the NFL games this weekend, have a look at Bodog.

If you are new to the online sports betting world and would like to get a better understanding on how to make a bet, how to read betting lines, and the payout potential for each type of bet, we recommend browsing through sports betting in Canada. Take your newfound knowledge on the upcoming games in week 10 and place a winning wager at any of our recommended sports betting sites.