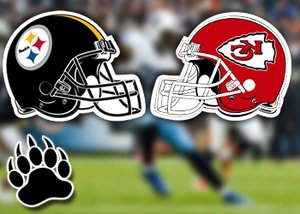 With week 6 of the NFL season inbound, it's quite clear that would-be bettors can start to feel more confident as things return to normal in the 2017/18 NFL season. At Grizzly Gaming, we continue to offer our predictions on some of the most enticing upcoming NFL matchups and provide our expert opinion on how things will play out for each of the games. This week, it's going to be fairly easy if you decide to pick straight-up winners, but far more difficult if you plan to pinpoint the teams that will win against the spread. With that in mind, let's take an in-depth look at the most interesting NFL football games and how you can have fun with football sports betting for the week.

The unpredictable NFL season continues to cause amazement, confusion, and shock, as the results from Week 5 proved once again. Expected winners like the Kansas City Chiefs and Green Bay Packers devastated the competition while the opposite was true for struggle-bus riders such as the Cleveland Browns and even the Chicago Bears, although the debut of Mitchell Trubisky on Monday night offered strong hints for a rebuilding team in the not too distant future. Other headlines included the return of quarterback Tom Brady for the New England Patriots, the undefeated streak of the Minnesota Vikings, the Denver Broncos finally receiving a loss, the San Diego Chargers managing to suffer another loss with only minutes left, the first NFL loss and interception for the Philadelphia Eagles quarterback Carson Wentz, and the collapse of quarterback Brock Osweiler for the Houston Texans.

On Sunday in week 6 of NFL action, we've got an AFC clash as we head over to the Arrowhead Stadium where the Pittsburgh Steelers face the undefeated Kansas City Chiefs. The Pittsburgh Steelers are currently sitting at 3-2 for the 2017 NFL season, with wins over the Ravens, Minnesota, and Cleveland along with losses to Jacksonville and Chicago. In the Jacksonville game, Ben Roethlisberger, the Pittsburgh Steelers quarterback, had a terrible outing on 33 out of 55 passing for 312 yards and 5 interceptions. The top rusher for the Steelers was LeVeon Bell with 15 carries for 47 yards. For the 2017 NFL season so far, Roethlisberger has 1,269 yards, 6 touchdowns, and 7 picks while Bell is the top rusher for Pittsburgh on 102 attempts for 371 yards and 3 scores. The lead receiver for the Steelers is of course Antonio Brown with 40 receptions on 64 targets for 545 yards and 1 touchdown.

Over on the Kansas City Chiefs' side, they are steadily cruising along with a surprising 5-0 with wins over the Eagles, Redskins, Patriots, Chargers, and Texans. In the Houston Texans game, Alex Smith, the Kansas City quarterback, put up a 29 out of 37 line for 324 yards and 3 touchdowns with Kareem Hunt handling the rushing responsibilities with 29 carries for 107 yards. For the 2017 NFL season so far, Smith has 1,391 yards, eleven touchdowns, and 0 picks while the top rusher for the Chiefs is Hunt on 97 attempts for 609 yards and 4 scores. Kansas City Chiefs' top receiver is Tyreek Hill with 25 catches on 34 targets for 365 yards and 2 touchdowns.

The Spread: Chiefs vs. Steelers

The Pittsburgh Steelers looked like a solid team against Baltimore, but managed to meltdown in two of their three games. The Steelers lost 23-17 against a mediocre Chicago team in overtime, and suffered a devastating 30-9 loss against Jacksonville, mostly thanks to Roethlisberger's picks. The Kansas City Chiefs on the other hand look like the top AFC contenders right now, with Alex Smith being recognised as capable and independent as the team's quarterback. We thought the matchup will be a lot closer earlier in the season, but as things stand right now, we can't pick against the Kansas City Chiefs with the betting line being so reasonable.

The Minnesota Vikings will meet the Green Bay Packers on Sunday at the U.S Bank Stadium for NFL action. The Green Bay Packers will look for yet another glorious road victory to continue building on their three-game winning streak. Aaron Rogers has managed to complete 66.7% of his passes for 1,367 yards, thirteen touchdowns, and 3 interceptions. Aaron Rogers has a combined ten touchdown passes in his last 3 games. Jordy Nelson and Davante Adams have combined for 515 receiving yards and ten touchdowns while Randall Cobb has a total of 23 receptions. The ground game of the Green Bay Packers is on average 93.6 yards per contest, while Aaron Jones is leading the way with 174 yards and 2 touchdowns. Looking at the defense, the Packers are allowing 321.2 yards and 22.4 points per game. Blake Martinez is leading the Packers with 37 tackles, Ha Ha Clinton-Dix has 1 interception, and Clay Matthews as 2.5 sacks.

The Minnesota Vikings will look to win back-to-back games to stay in the NFC North race for the first time this season. The Vikings have managed to win 7 of their last 11 home games. Case Keenum has managed to complete 64.5% of his passes for 895 yards, 4 touchdowns, and 0 interceptions. Case Keenum and Sam Bradford have combined for 7 touchdown passes and 0 picks this season. Adam Thielen and Stefon Diggs have combined for 787 receiving yards and 4 touchdowns while Kyle Rudolph has sixteen receptions. The ground game of the Minnesota Vikings is on average 118.2 yards per contest, while Dalvin Cook is leading the ay with 354 yards and 2 touchdowns. Looking at the defense, the Vikings are allowing 309.2 yards and 18.6 points per game. Andrew Sendejo is leading the Vikings with 37 tackles, Harrison Smith has 2 interceptions, and Everson Griffen has 6 sacks.

The Spread: Packers vs. Vikings

It really doesn't matter who takes the quarterback position for the Minnesota Vikings. There's just not enough constant offense and too many injuries in the team, regardless of who takes under center, for them to go up against a very exciting Aaron Rodgers. The Green Bay Packers have also managed to find a bit of a running game thanks to Aaron Jones replacing Ty Montgomery who was recently injured. That makes the Packers even scarier as we move forward in the NFL season. Although the Vikings play differently at home and have an elite defense, the Packers are still going to score. The Vikings have a combined score of 27 in their last 2 games which is clearly not enough to hang with the Packers offensive powerhouse.

The Miami Dolphins will meet the Atlanta Falcons at the Mercedes-Benz Stadium on Sunday for week 6 NFL action. The Miami Dolphins are surprisingly 2-2 this season with wins over the Titans and the Chargers along with losses against the Saints and the Jets. In the Tennessee Titans game, Jay Cutler, the Miami Dolphins quarterback, put up a 12 out of 26 line for 92 yards, one touchdown, and one pick with Jay Ajayi rushing 25 times for 77 yards. For the 2017 season so far, Jay Cutler has 706 yards, 3 touchdowns, and 3 interceptions, while Jay Ajayi is leading the Miami Dolphins in rushing with 76 attempts for 261 yards. DeVante Parker is the top receiver for the Dolphins with 19 catches on 28 targets for 236 yards and 1 touchdown.

Over on the Atlanta Falcons side, they are currently sitting at 3-1 after starting the year with 3 wins over the Lions, Packers, and Bears, then losing 23-17 against Bills in their last outing. In that Detroit Lions game, Matt Ryan, the Atlanta Falcons quarterback, went for 242 yards, 1 touchdown, and 2 picks, while Tevin Coleman was leading the rush with 9 carries for 77 yards, and the receiving attack for 4 receptions on 65 yards. For the 2017 NFL season so far, Ryan has accumulated 1,109 yards, 5 touchdowns, and 5 picks, while Devonta Freeman is leading the rushing for the Falcons on 285 yards and 5 touchdowns from 70 attempts. The top Falcons receiver is Julio Jones with 19 catches on 30 targets for 295 yards.

The Spread: Falcons vs. Dolphins

Let's be honest, the Miami Dolphins aren't a sensational football team, even though the .500 record indicates they're at the very least mediocre. The Dolphins' two wins have occurred with a combined score of 8 points, while their two losses have a combined score of 34 points. That said, the defense has greatly assisted to keep the Dolphins in games, and overall, they are a pretty decent squad. However, even with Matt Ryan's turnover problems, the Atlanta Falcons had 2 weeks to fully prepare for this game and therefore we predict the Falcons to take the win this Sunday.

Week 6 of the season is fast approaching and it's quite an interesting one in terms of early point spreads. Our initial impression of the NFL betting odds is that the upcoming games fall into one of two categories. They are either expected to be very close, causing the spreads to be even, or they're extremely off-balance with favourites taking the win. There are loads of sports betting sites that feature competitive odds for each upcoming NFL game in week 6, but after doing some extensive research, you'll agree that Bodog as well as Bet365 are offering some of the best odds in the industry.

If you would like to place a bet on any of the upcoming NFL games, but still feel a bit overwhelmed by the vast range of betting odds in the NFL, fear not as you can greatly improve your betting abilities by quickly browsing through sports betting in Canada to get a better understanding of how betting on the NFL works.

With week 6 around the corner and plenty of betting opportunities already available, take our NFL game predictions into consideration and make an educated wager to fill your pockets.