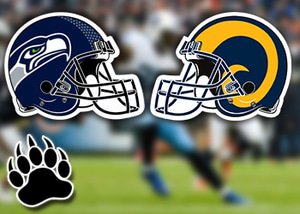 The NFL season is well underway, with week 5 now on the horizon. At Grizzly Gambling, we provide week-by-week predictions on the most entertaining upcoming NFL games and include our expert advice on how each of the games will play out. This week, there are some interesting matchups between favourite teams, some expected to bring home a W, while others are predicted upsets. Let's take a look at what the big games are and how you can get in on the football sports betting action.

NFL Week 4 was painful to the football teams that were supposed to rule the 2017 NFL season. The Falcons, Cowboys, Raiders, and Patriots were the toast of the league during the 2016 season, and most expected these four teams to continue thriving in 2017. However, at the season's quarter mark, this hasn't been the case. All four teams managed to lose on Sunday with New England, Oakland, and Dallas dropping to a surprising 2-2. (Despite their 2-2 record though, Sports Interaction is reporting the Patriots remain +350 odds favourites to win the Super Bowl.) After a choppy first month of the season, the NFL's supposed heavyweights are showing cracks that can have devastating implications if left unattended. The question is, which of the fatal flaws can be rectified as the season continues, and which are indicative of who these teams could become for the remainder of the season?

Week 5 Betting Strategy - Predicted Wins and Upsets to Bet On

The Los Angeles Rams and the Seattle Seahawks meet Sunday at the Los Angeles Memorial Coliseum in NFL action. The Seattle Seahawks will look for their first road victory of the 2017 NFL season to get a game over a .500 record. The Seahawks have lost 5 of their last 7 road games. Russel Wilson has managed to complete 61.7% of his passes for 1,024 yards, 7 touchdowns, and 2 interceptions. Wilson has a combined record of 6 touchdowns is his last 2 games. Paul Richardson and Doug Baldwin have combined for 420 receiving yards and 3 touchdowns while Tyler Lockett has a total of 13 receptions. The Seattle's ground game has an average of 121 yards per contest, and Seattle's running back, Chris Carson, leads the way with 49 carries on 208 yards. Looking at the defense, the Seahawks are allowing 318.8 yards and 19.3 points per game. Bobby Wagner is leading the Seahawks with 33 tackles, Nazair Jones has 1 interception, and Michael Bennett has 3 sacks.

The Los Angeles Rams will look for their third consecutive victory to improve on their amazing 3-1 start for the 2017 NFL season. The Rams have lost 8 of their last 10 games. Jared Goff has managed to complete 66.7% of his passes for 1,072 yards, 7 touchdowns, and 1 interception. Goff has a combined 5 touchdown passes in his last 2 games. Sammy Watkins and Todd Gurley have combined for 445 receiving yards and 5 touchdowns while Robert Woods has a total of 12 receptions. The Los Angeles ground game has an average of 113.5 yards per contest, with Gurley leading the way with 362 yards with 4 touchdowns. Looking at the defense, The Rams are allowing 367.8 yards and 26.3 points per game. Alec Ogletree is leading the Rams with 31 tackles, Mark Barron has 1 interception, and Connor Barwin has 2 sacks.

The Spread: Seahawks vs. Rams

The Seahawks have managed to find their groove in the second half against the Tennessee Titans and, on Monday night, completely unleashed in the second half against the Indianapolis Colts. Although the offense line still has a few issues, and the defense isn't as brilliant has it was in the past, you can still see signs of the Seahawks playing like the Seahawks. On the other hand, the Los Angeles Rams suddenly have an offense and a bit of pep in their step. The Los Angeles Rams are successfully running the ball with Golf throwing it all over the field, and the defense has forced 7 turnovers in 4 games. The Los Angeles Rams defensive front will be making the game as they have 12 sacks for the season, while the Seattle Seahawks have major issues with their offensive line. The Seahawks have also lost their top running back, Chris Carson, due to a broken bone in his left leg and a high ankle sprain. The Los Angeles Rams have also won 4 of the last 6 meetings against the Seattle Seahawks, and the Seahawks aren't the same team on the road as they are when playing at home. Therefore, we predict the Rams to win the game outright on Sunday.

The Kansas City Chiefs will look for yet another victory to make it an astonishing 5-0 for the first time in 4 years. The Chiefs are boasting with 8 consecutive road game wins. Alex Smith has managed to complete 76% of his passes for 1,067 yards, 8 touchdowns, and 0 interceptions. Smith has 2 or more touchdown passes in 3 of his last 5 games. Travis Kelce and Tyreek Hill have combined for 543 receiving yards and 4 touchdowns while Albert Wilson has a total of 14 receptions. The Chiefs ground game has on average 163.5 yards per contest, and Hunt is leading the way with 502 yards and 4 touchdowns. Looking at the defense, The Chiefs are allowing 369 yards and 19 points per game. Terrance Mitchell is leading the Chiefs with 22 tackles, Chris Jones has 2 forced fumbles, and Justin Houston has 4 sacks.

The Houston Texans will look for back-to-back victories in order to get a game above a .500 record. The Texans have won 8 of their last 10 home games. Deshaun Watson has managed to complete 64.9% of his passes for 811 yards, 7 touchdowns, and 4 interceptions. Deshaun Watson has a combined 6 touchdown passes in his last 2 games. Lamar Miller and DeAndre Hopkins have combined for 431 receiving yards and 3 touchdowns while Bruce Ellington has 7 receptions. The Texans ground game has an average of 139.8 yards per contest, and Lamar Miller is leading the way with 257 yards and 1 touchdown. Looking at the defense, the Texans are allowing 291.5 yards and 22 points per game. Benardrick McKinney is leading the Houston Texans with 25 tackles, Andre Hal has 2 interceptions, and Jadeveon Clowney has 3 sacks. Currently, Real Deal Bet has the Texans' money line bet at 1.95.

The Spread: Texans vs. Chiefs

The Kansas City Chiefs are without a doubt the most impressive team of the 2017 season for the first month, but their offensive line is banged up quite heavily and they are playing the game on short rest. Mitch Morse is out with a foot injury, Eric Fisher is dealing with back issues, Laurent Duvernay-Tardif recently suffered a knee injury, and Parker Ehinger has a knee issue. The Chiefs interior offensive line is battling to hold up, and it will continue with Watt and Clowney pinning their ears back. The Houston Texans are also playing fantastic football right now, as Deshaun Watson is making waves despite is lack of experience, and the Texans have produced a combined 90 points in their last 2 games. We predict the Texans will win the game outright due to several injuries with the Kansas City Chiefs.

The Minnesota Vikings and the Chicago Bears will meet Monday night at the Soldier Field stadium in NFL action. The Minnesota Vikings are entering the game with a 2-2 record for the 2017 season. The Vikings recorded wins over Tampa Bay and New Orleans, but lost against Pittsburgh and Detroit. In the Detroit Lions game, quarterback Case Keenum managed to put up a 16 out of 30 line for 219 yards while the top rusher was Dalvin Cook on 66 yards, 13 carries, and 1 touchdown. In the 2017 season, Keenum has gathered 755 yards and 3 touchdowns while Cook was leading the Minnesota Vikings on his 354 yards and 2 scores from 74 attempts. Stefon Diggs is leading the Vikings in receiving on 22 grabs, 32 targets, 391 yards, and 4 touchdowns.

Over on the Chicago Bears side, the Bears are entering the game with a 1-3 record, following losses to the Buccaneers and Falcons, an unlikely win over the Pittsburgh Steelers and an embarrassing loss to the rival Green Bay Packers in their last game. In the Green Bay Packers game, the Chicago Bears quarterback Mike Glennon went 21 out of 33 for 2018 yards, 1 touchdown, and 2 picks while Jordan Howard was leading the rush on 53 yards, 18 carries, and 1 touchdown. Glennon is sitting on 833 yards, 4 touchdowns, and 5 interceptions, while Jordan Howard has 252 yards and 4 scores on 63 attempts. Chicago's top receiver is Kendall Wright on 154 yards, 14 receptions, and 1 touchdown.

The Spread: Vikings vs. Bears

The Minnesota Vikings are 2 notable injuries coming into this game: David Cook is out for the season with a torn ACL, while quarterback Sam Bradford is currently day-to-day and might return to the game. That means Jerick McKinnon and Latavius Murray will need to carry the load, and neither of them inspires much confidence. As for the Chicago Bears, they are benching Glennon in favour of rookie sensation Mitch Trubisky, making his first career start in a division game on the largest NGL stage. With all things considered, Chicago should have a sufficient ground game to buoy Mitch Trubisky and scrape out a cover against a depleted Minnesota Vikings team. However, with so many variables to consider on both sides, the game can go either way.

Just by looking at these three games alone, you can already see the season is shaping up in terms of who are the pretenders, contenders, and teams that should rather just give up and tank. In week 5 the NFL teams will either set their status as true contenders or fall to the wayside with make-or-break matchups. There will also be plenty of betting opportunities available on Thursday night football and Sunday as well.

If this is the first time you want to bet on the NFL season, or you simply wish to improve on your NFL knowledge, you can't go wrong by taking a few moments to brush up on sports betting in Canada. Make sure to compare the betting odds on sites like Sports Interaction and Real Deal Bet before placing your bet for week 5.

With your newfound knowledge surrounding week 5 of the 2017 NFL season, make your way to a reputable football betting site, and put your knowledge to the test.