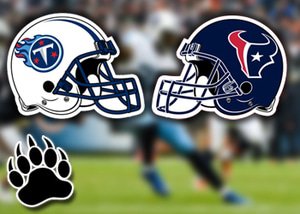 Week 4 is shaping up to be an exciting week for the National Football League. At Grizzly Gambling, every week we highlight some of the best upcoming games and offer our expert advice on the teams we believe will provide some of the best sports betting entertainment in the NFL. We also include the most recent betting odds from top sites and look at key variables such as game statistics and injuries that may have a significant effect on the upcoming games, assisting you in making an educated decision before placing your bet.

Week 3 of the NFL will be remembered for the unexpected team and individual performances, the avalanche of upsets, and some extraordinary finishes, making it one of the best we've seen so far in the 2017 season. The thriller between the 49ers and the Rams we witnessed on Thursday night seemed like it was going to be the most exhilarating game of the week. Instead, it was just a hint of what the weekend had in store for us. Most of the attention surrounding the NFL on Sunday Night Football was the protests, but on the field, every game offered a bit of everything.

The Kansas City Chiefs and the Washington Redskins will be meeting up at the Arrowhead Stadium in week 4 NFL action. The Washington Redskins are entering the game with a 2-1 record, failing to the Philadelphia Eagles in the opener and fortunately getting wins over the Los Angeles Rams and the Oakland Raiders. In the Raiders game, the Redskins quarterback Kirk Cousins went 25 out of 30 for 365 yards and 3 touchdowns. The Washington rush was led by Samaje Perine with 19 carries and 49 yards, while six catches were put up by Chris Thompson for 150 yards and a score. Kirk Cousins has 784 yards for the season so far along with 5 touchdowns and 1 pick for the Washington Redskins. Meanwhile, Chris Thompson is leading Washington in both receiving (13 catches; 230 yards; 2 touchdowns) and rushing (14 attempts; 120 yards; 2 touchdowns).

The Spread: Redskins vs. Chiefs

Both teams are off to a great start for the season and are far better than most expected as well. The Kansas City Chiefs are very solid, especially when you consider their last 3 games, and have managed to spark conversations of becoming the next AFC champions. Bodog is currently reporting their moneyline at -280. We, therefore, expect the Chiefs to take the win on Monday.

The Houston Texans and the Tennessee Titans are facing off in a South divisional head-to-head in week 4 at the NRG Stadium. Marcus Mariota managed to throw for 225 yards and 2 touchdowns on 20 out of 32 pass attempts. Running back, DeMarco Murray, led the Titans with 115 yards and 1 touchdown on 14 carries with Derrick Henry adding 54 yards on 13 carries for the Titan's ground attack. Rishard Matthews led the Tennessee Titans with 6 catches for 87 yards and a touchdown, while Delanie Walker and Eric Decker each caught four passes, and Jonnu Smith adding an incredible touchdown grab for the second week in a row. Looking at the defense, an Erik Lashawn Walden sack highlighted a rather disappointing effort from the Titan's defense, giving up 433 yards of overall offense and 27 points to the Seattle Seahawks that scored 21 points, and accumulated 537 yards of total offense over the first two weeks of the 2017 season.

The Houston Texans will try their best to bounce back after dropping a tragic 36-33 loss against the New England Patriots in week 3, dropping to 1-2 for the season. Deshaun Watson managed to throw for 301 yards and two touchdowns that were cancelled out by two interceptions in the Week 3 loss. Deshaun Watson racked up 41 yards on 8 carries while Lamar Miller put up 56 yards on 14 carries. DeAndre Hopkins led the Texans with seven catches for 76 yards, while D'Onta Freeman put up 65 yards with 2 receptions. Bruce Ellington and Ryan Griffin each chipped in a receiving touchdown against the Patriots in a losing effort. The Houston Texans combined for 5 sacks and 4 forced fumbles along with a fumble recovery from Jadeveon Clowney who managed to return it 22 yards for the defensive score.

The Spread: Titans vs. Texans

We were initially under the impression that the Tennessee Titans were just a flash in the pan until they made us eat our words last week by beating the Seattle Seahawks. The Houston Texans kept it rather close against the New England Patriots and gave the Patriots quite a scare. A loss like that certainly gives a significant boost to your confidence, and keeping it close in a game that had a 14-point spread is great, but this betting line is low enough that the Titans shouldn't have any problem claiming the win.

The Miami Dolphins and the New Orleans Saints will be meeting up in week 4 at the Wembley Stadium. The New Orleans Saints enter this matchup with a 1-2 record, losing to the Minnesota Vikings 29-19 and the New England Patriots 36-20 before claiming their first 34-13 win against the Carolina Panthers in week 3. In the Panthers game, the Saints quarterback, Drew Brees, went 22 out of 29 for 220 yards and 3 touchdowns, while Mark Ingram led the Saints rush on 14 carries and 56 yards. The New Orleans top receiver was Michael Thomas with 7 receptions for 87 yards and a touchdown. So far, Drew Brees has 867 yards and 6 touchdowns, while Mark Ingram is the New Orleans' top rusher on 125 yards. Michael Thomas leads the way for the Saints in the receiving department with seventeen receptions on 26 targets for 221 yards and a score.

The Miami Dolphins are currently sitting at 1-1 with a postponed game against the Tampa Bay Buccaneers, a win over the Los Angeles Chargers, and a 20-6 loss against the New York Jets in week 3. In the Chargers game, Dolphins quarterback, Jay Cutler, went 26 out of 44 for 220 yards, one touchdown and a pick, while Jay Ajayi only managed to muster 16 yards on 11 carries. The top Miami receiver was DeVante Parker with 8 catches for 76 yards and a touchdown. For the year, Jay Cutler has put up 450 yards, 2 touchdowns, and a pick, while Jay Ajayi leads the Miami Dolphins with 138 yards on 39 attempted rushes. DeVante Parker 12 receptions, 19 targets, and 161 yards as top receiver for the Dolphins in the last two games.

The Spread: Saints vs. Dolphins

The Miami Dolphins were embarrassed by the New York Jets on Sunday, giving the team a bad start in AFC play. We don't consider Jay Cutler to be downright awful, but the Miami Dolphins running game can do with some work. As for the Saints, they've managed to lose against two quality teams and win against a bad team, which is exactly how we predicted things would turn out. To be honest, this game could go either way, but we predict the Miami Dolphins will have an easy time against the New Orleans defense. Sports Interaction has predicted that almost 80 percent of NFL sports bettors are backing the Saints to cover.

Just by looking at these three games, there is sure to be more upsets, close finishes, and unlikely heroes in week 4 of the NFL season. Bettors are likely to start seeing trends emerging with certain teams, providing a nice weapon of insight against bookmakers who must provide early-week betting lines straight away. There will be loads of NFL betting odds to consider this week, and even more betting opportunities available On Thursday, Sunday, and Monday evening.

Now that you have a better understanding of what to expect in Week 4 of the NFL season, head over to a sports betting site like Sports Interaction or Bodog, and put your betting skills to the test.