Daenerys Targaryen Is Favoured To "Win" Game Of Thrones 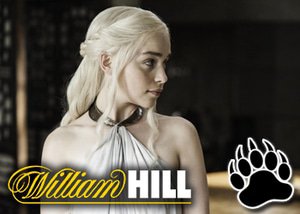 Game of Throne's the HBO's TV series is now in its sixth series and it really is anyone's guess who is going to end up sitting on the Iron Throne. George RR Martin's original books have become one of the most talked about TV series for quite some time.

The show has a massive cult following and this book series has led to so many different theories and predictions as to who is going to end up taking the throne. Bookmaker William Hill has created their own Game of Thrones betting odds and is allowing fans to place wagers on who they think will rule the Seven Kingdoms by the time the TV show ends.

Daenerys Targaryen, Breaker of Chains and Mother of Dragons, played by Emilia Clarke, is the favorite at 3/1. This is most likely influenced by the latest episode in which viewers saw her walk from the flames to acquire yet another huge and powerful Dothraki army which she can now command to do her bidding.

The next three characters in the running to take the throne are Winterfell's greenseer Bran Stark at 4/1, Jon Snow who returned from the in the second episode of season six who is 9/2, and Sansa Stark at 11/2. The remaining Stark, Rickon, who we now know is being held captive by Ramsey Bolton, comes in at 25/1 but his situation is precarious so you might want to hold off on betting on him for another episode or so.

According to Joe Crilly, spokesman for William Hill, "We are four episodes deep into series six and the power struggles show no sign of letting up. It looks as though almost anybody could end up as the winner of the Game of Thrones - as long as they survive until the end of the final series." As we all know, Martin has completed the books so there are no clues as to what we can expect and fans are eagerly awaiting each episode to see what comes next.

Unfortunately for Canadians living in British Columbia, William Hill does not accept wagers from BC any longer, so you'll need to find another sports betting site that offers Game of Thrones betting odds.

Fans of the series who also enjoy slots games can test out their skills by playing the Game of Thrones slot from Microgaming. This is a 5 reel, 15 payline video slot with 243 ways to win. It is packed full of great features including scatters, free spins, multipliers, and more. You can play for free with no download and no registration right here on our site and if you decide to play for real money we have the best casino bonus offers too.