Game of Thrones
Enjoyed playing this game?
Rate it → 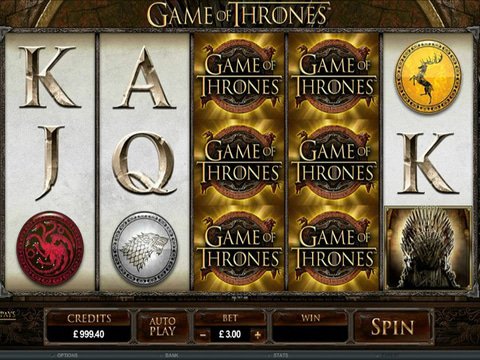 The new Game of Thrones slot is looking to be a pretty big deal, and it's looking to capitalize on the huge following of the television show on HBO. Microgaming has created the Game of Thrones slot machine to provide endless entertainment for those who are fans, and you can review it right here on this page with the Game of Thrones free play slot demo that is available to you with no download and no registration required. Because it is Flash enabled, it can be accessed from just about any computer or mobile device.

There are five reels and 15 paylines, but there are 243 ways to win if you choose to place the maximum bet. As such, the coin denomination range is quite nice, as is the betting range, and this means that the title will fit into just about any budget should gamblers decide to play for real money. Autoplay is available, as well, and this will allow you to set your per-spin bet amount and then choose a number of spins that will play out automatically while you relax.

There are a number of features that are designed to provide endless entertainment, but perhaps the most rewarding of these is triggered when you see any three Title Logo icons scattered anywhere on the screen. Then, you'll be able to choose one of the House Sigils in order to receive varying numbers of free spins with multipliers that range from 2x to 5x. These can be retriggered at any point, too, so they're definitely worth your while. The other major feature is the scatter, and it pays whenever you see two or more anywhere on the screen. Though prizes vary a lot, you can really benefit if you get all five on the screen at once.

The Game of Thrones series is based on the series of books by George R. R. Martin, and while there are some major differences between the books and the television series, one thing for sure is that it's one of the hottest things going right now. What makes it such a big deal, and what captivates people the way it does, is that there are so many storylines that seem separate but that come together just enough to keep everything together. There's a ton happening in the stories with a huge cast of characters, and this is the type of thing that Microgaming has used in their games before to huge success.

Because there are so many characters, settings and storylines in this series, we can expect the Game of Thrones slot to use several of them. This usually comes in the form of bonus features or mini games, and because there is a ton of material to work with from the show, it's almost a sure bet that we're going to be seeing a lot of features that use the characters and themes from the shows.

While the Game of Thrones slot machine might not be for everyone, those who love the series of books or the television show will have one more way to enjoy their favorite House. This one is the only one that can truly pay off in the form of cold, hard cash.

When it comes to new titles, Microgaming has been on a roll in 2014. They have brought out some of the biggest releases we've seen in a while such as Jurrasic Park and Terminator 2. This highly-anticipated Game of Thrones slot is looking like it could turn out to be one of the hottest new slots games added by any software company in the industry for this year. Let's check out what we know about this game and what you have to look forward to.