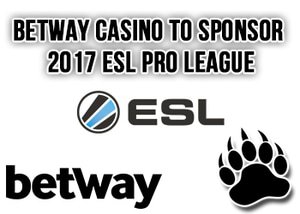 Betway casino eSports and sportsbook is one of the leading providers of eSports and they have just announced that they will be a major sponsor for the 2017 ESL Pro League Tournament.

eSports betting has been on the rise for several years and this trend is expected to continue. Betway is one of the leading eSports sportsbook operators. The fact that they are a major sponsor for the ESL Pro League 2017 tournament shows the success of this sport.

The ESL Pro League is the longest running in professional Counterstrike: Global Offensive (CS:GO) and it has just kicked off its sixth season. There are fourteen European and North American teams taking place and all battling it out to take home the grand prize of $1,000,000.

The online phase of the 2017 ESL Pro League tournament will see matches being held three times a week. These will be on Tuesdays, Wednesdays, and Thursdays, all the way through to the finals which will be held in Odense, Denmark, from the 8th to the 10th of December.

Betway had a successful relationship with ESL One Cologne earlier this year and has now gone on to become a major sponsor in the tournament. They will be adding live odds to the tournament broadcast on the Betway Casino eSports section and the odds are being compiled by their team of expert eSports traders.

Director of operations at Betway, Anthony Werkman, said, "We are very excited for the next few months as some of the world's best CS:GO players will battle it out for the biggest prize, the ESL Pro League, as well as the seven-figure prize pool. Our experience sponsoring ESL Cologne was a huge success, and the feedback we received from our first-of-its-kind live odds feeds into the broadcast has inspired us to increase our involvement across tournaments and teams in the coming months and years."

Betway casino eSports has been increasing its quality and amount of betting content over recent years as well as obtaining membership of the Esports Integrity Coalition (ESCI) last year. eSports betting is on the rise and it is expected to continue too.

Get Up To $1,000 Free With the Betway Casino Bonus

If you want to do some eSports betting during the 2017 ESL Pro League Tournament you will need to have a real money account with Betway Casino. Right now all new players can get up to $1,000 free with their fantastic welcome package. This is a spread out over your first three deposits at the casino and works out as follows.

The wagering requirements are set at 50x and there are different game contributions so be sure to check them out. You will find more information in our Betway Casino bonus review.