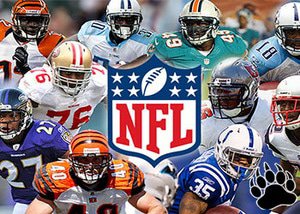 The NFL is swimming in cash and the teams are more valuable than ever. However, which NFL teams rank the highest in terms of value for 2018?

The NFL is still considered the most lucrative sports league in the world, especially when you place bets on the NFL. All you need to do is look at the richest team owners to understand how lucrative this major sports league truly is. Despite a decrease in ratings, the NFL still rakes in an enormous financial stream when it comes to television rights, dividing $8.2 billion to each NFL team as part of the league's shared revenue.

The latest poll also indicated that football remains king among sports fans in the United States. The results indicated that 37% of viewers chose football as their favourite sports league to watch, and although this is down from the 43% peak in 2007, it's still miles ahead of any other sports league in the world. The average football team in the NFL is worth $2.5 billion which is an increase of 2% since last year. With that in mind, let's take a look at the top 5 NFL teams as we rank them according to value.

1. Dallas Cowboys - Worth $5 billion and owned by Jerry Jones

Everything is bigger in The Lone Star State, including the bank account of the most popular NFL team in the world. The Dallas Cowboys takes the number 1 spot on our list, beating soccer's largest franchises (Barcelona, Real Madrid, Manchester United) and the New York Yankees with a value of $5 billion. The football franchise also matched Real Madrid as the team with the largest increase in value over the past 12 months at 14%.

2. New England Patriots - Worth $3.8 billion and owned by Robert Kraft

The New England Patriots is the second most valued NFL franchise with a value of $3.8 billion along with a 9% increase in value. Given their successive Super Bowl appearances and a total of 9 playoff berths in a row, it shouldn't come as a shock that they are ranked this high on our list. In 2017, the NFL franchise saw a 50% increase in merchandise sales after their victory against the Atlanta Falcons.

3. New York Giants - Worth $3.3 billion and owned by Steven Tisch and John Mara

With a value of $3.3 billion, the New York Giants takes the third spot on our list. The Giants had a miserable 2017 NFL season where they finished dead last in the NFC East division with a terrible 3-13 record. This is likely to change this season with Saquon Barkley as their latest addition. The four-time champions also have a huge decision to make as Odell Beckham Jr is in the last year of his contract.

4. Los Angeles Rams - Worth $3.2 billion and owned by Stanley Kroenke

The Los Angeles Rams are fourth on our list with a value of $3.2 billion. The team experienced a huge improvement during the second year back in Los Angeles, winning the NFC West division with an impressive 11-5 record. Eight players in the team made it to the Pro Bowl and the front office decided to bring in Marcus Peters, E.J Gaines, and Brandon Cooks for the 2018 NFL season.

5. Washington Redskins - Worth $3.1 billion and owned by Daniel Snyder

Taking the fifth spot on our list is the Washington Redskins with a value of $3.1 billion. The team is enjoying a steady growth in value, increasing by $250 million in the last two seasons. However, although the money is increasing, the team hasn't made it to the postseason for the past 3 years. After a 7-9 record in 2017, the team decided to trade for Alex Smith and let Kirk Cousins sign up with the Vikings. Hopefully, this will make a difference in the 2018 NFL season.

The NFL and Sport Betting

There's no denying that the NFL is the most popular sports to bet on in Canada. You can find a wide range of online sports betting sites, each providing a tremendous variety of betting types along with some of the most competitive odds in the industry. However, if you are looking for a reputable online sportsbook that not only provides the best odds but also offers one of the best user-interfaces in the world, we highly suggest that you bet on the NFL with Bet365 where you'll also be treated to a fantastic welcome bonus on your initial deposit.