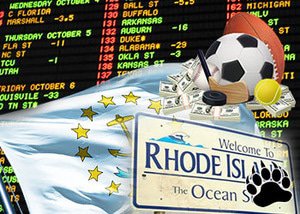 Rhode Island becomes the third state in the US to legalize sports betting within its borders, but high fees might hinder revenue opportunities in the process.

On 22 June 2018, Rhode Island Govender Gina Raimondo managed to approve the state's budget which essentially opened the doors for sports betting within the state. Although it's projected that the approval will provide millions in additional revenue, Rhode Island imposed a 51% in tax on all winnings which could discourage prospective gambling partners going forward. The 51% on all winnings is by far the highest in the nation.

While New Jersey and Delaware legalized sports betting with around 10% in fees on all winnings, Rhode Island is projected to take more than half of the overall net revenue. If The Ocean State takes 51% in revenue, the vendor will receive 32% while the casino will only receive 17%. Dominick Ruggerio, the Rhode Island Senate President, and Lawmakers attempted to sell the high fees and legislation, stating that it will assist in funding schools and roads without the need to increase taxes.

Pennsylvania is Struggling with Fees

Pennsylvania was one of the first states to consider legal sports betting within its borders, passing a bill in late 2017. This took place long before the Supreme Court made the decision to take down the federal ban that affected sports betting. The head start gave the Keystone State a clear path to accepting wagers once the court ruling passed.

Instead of following the lines of Delaware and New Jersey, or replicating taxes in the same manner as Nevada, Harrisburg lawmakers decided to triple the state fees, arriving at a total of 36% on all winnings. With a $10 million fee to obtain a sports betting license, partners and sports betting companies have remained wary to enter the Pennsylvania market and it's not surprising at all with such a high fee.

Several months after Pennsylvania legalized sports betting, Pennsylvanians have witnessed New Jersey opening its sports betting market while they continue to struggle to do the same in their home state. The legal framework is perfectly structured. It's just been difficult to attract potential bettors to make NFL bets and other wagers within Pennsylvania when the betting markets are so handicapped with fees.

There's been discussion surrounding the state legislature and introducing a new law that presents lower fees, but there's been little action in this regard. The sports betting market in Pennsylvania basically exist in limbo and keep in mind that this is with taxes 15% less than the state of Rhode Island.

With Pennsylvania being the test case, experts within the gambling industry are worried about opportunities within the state of Rhode Island. With such a small margin for potential revenue in the Ocean State, gambling entities have almost no incentive to promote and market sports betting.

Rhode Island will take its first legal bet on 1 October 2018. This allows citizens of Rhode Island to bet on NHL hockey which will see the 2018-2019 NHL regular season begin on 3 October 2018.