Rank Group and 888 Team Up To Acquire William Hill 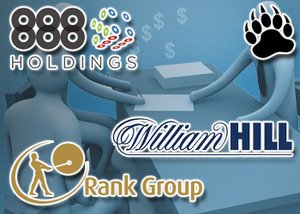 UK gambling market consolidations have increased over the past week and there are reports that a casino operator and online gambling business are teaming up on a joint bid to acquire bookmaker William Hill.

In the first report we read, Rank Group and 888 are in "advanced talks" about a merger that would see them form a £2 billion firm. Assuming that this merger deal goes ahead, the pair is then set to make a £3 billion play to acquire William Hill. In doing so they will be creating a truly full spectrum gambling operator.

After this report was printed, Rank Group and 888 subsequently issued a joint statement saying that they saw, "significant industrial logic in acquiring William Hill," a move that they believe will result in "substantial revenue and cost synergies."

Both companies have stated that no formal offer has yet been made to the board of William Hill, and there is no certainty that an approach or transaction will take place. UK takeover regulations do however give both companies unit the 21st of August to propose specific terms of a deal.

Rank Group operates over 50 Grosvenor casinos and nearly 100 Mecca Bingo clubs, as well as a successful online division that is still in its early stages.

888 is an online-only company with a, particularly strong poker division. 888 and William Hill have been down the acquisition road before when William Hill attempted to acquire their online rival in 2015. Talks fell apart after 888 co-founder Avi Shaked felt the offer was too low. 888 then went on to try and acquire Bwin Party but they were beaten by GVC Holdings.

William Hill has the UK's second largest online division as well as the UK's largest retail betting presence that generates over half of their overall revenue. They are also featured in the list of top ten largest online gambling companies for 2016. They have issued a statement confirming the receipt of a preliminary approach saying, "The board of William Hill would listen and consider any proposal which might be forthcoming from the consortium. However, it is not clear that a combination of William Hill with 888 and Rank will enhance William Hill's strategic positioning or deliver superior value to William Hill's strategy which is focused on the increasing the group's diversification by growing its digital and international businesses."

All these mergers and acquisitions have increased following the UK government's requirement for all UK-facing online operators to hold UK Gambling Commission licenses and pay 15% tax on online revenue derived from UK gamblers. Operators with a UK retail presence also saw an increase in tax on their shop's fixed-odds betting terminals, while the European Union markets hit online operators with new value added taxes.

The biggest consolidations include the merger of Ladbrokes and Gala Coral Group. They were granted conditional approval by the UK Competition and Markets Authority in May 2016. There was also the merger of Paddy Power and Betfair who began trading as Paddy Power Betfair in February 2016.