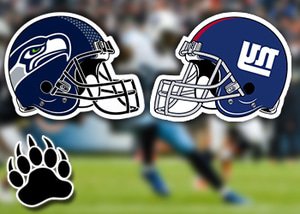 Week 7 of the NFL starts with an epic AFC West showdown between the Oakland Raiders and the Chiefs, while sports bettors can also look forward to a Super Bowl 51 repeat between the Falcons and the New England Patriots. In addition, division rivals will meet to gain an early edge, and teams will be facing make-or-break matchups to try and stop losing streaks.

We're here to take an in-depth look at some of the most entertaining and interesting NFL games this week and offer our expert advice and game predictions to assist you with the upcoming football sports betting action for week 7.

As we look back, week 6 of the National Football League was certainly one for the books! However, for many teams it's a week that is best left in the rear-view mirror, even for some of the winners. Whether it was the Denver Broncos losing Trevor Siemian, the Green Bay Packers losing Aaron Rodgers, or the Tampa Bay Buccaneers losing Jameis Winston, its clear that injuries in week 6 was once again pervasive. Then there were the surprising upsets, including the Los Angeles Chargers claiming a 17-16 win over the Oakland Raiders and the Miami Dolphins winning by a close 20-17 margin over the Atlanta Falcons. Other surprising outcomes include the first loss for the Kansas City Chiefs and the New York Giants dominating the Denver Broncos without their top 3 wide receivers. Hopefully week 7 will have fewer injuries, and as for crazy upsets, things are looking a lot more straightforward. However, as the NFL continues to show every week, nothing is for certain in the 2017 season.

The New England Patriots and the Atlanta Falcons will meet Sunday at the Gillette Stadium for some NFL action. The Atlanta Falcons are currently sitting at 3-2 right now with wins over the Chicago Bears, the Green Bay Packers, and the Detroit Lions before losing to the Buffalo Bills and the Miami Dolphins. In the Miami Dolphins game, Matt Ryan, the Atlanta quarterback, posted 248 yards, one touchdown, and 1 pick but was unable to stop Miami from scoring 20 points. For the 2017 season so far, Ryan has 1,357 yards, 6 scores, and 6 picks, while Devonta Freeman is leading the rush for the Falcons on 353 yards and 5 touchdowns with 79 attempts. The top receiver for the Falcons is Julio Jones with 25 catches for 367 yards.

Over on the New England Patriots' side, they are currently sitting at 4-2 after losing to the Kansas City Chiefs and the Carolina Panthers along with wins against the New Orleans Saints, the Tennessee Texans, and the New York Jets. In that Jets game, Tom Brady, the Patriots quarterback, put up 257 yards with 2 touchdowns and 1 interception with most of the work going to top receiver Brandin Cooks who managed 6 catches for 93 yards. For the 2017 season so far, Brady has 1,959 yards, 13 touchdowns, and 2 interceptions, while Mike Gillislee is leading the rush for the Patriots on 290 yards and 4 scores off 79 attempts. Brandin Cooks is New England's top receiver with 472 yards, 24 catches, and 2 scores.

The Spread: Patriots vs Falcons

The Atlanta Falcons looked pretty incompetent in the second half against the Miami Dolphins, but credit can be given to the Miami Dolphins for not giving up. This makes it two in a row after a 23-17 Atlanta defeat to the Buffalo Bills. This will certainly be one of those exciting offensive-heavy matchups, and we are not really convinced that the New England Patriots have it in them this year. Therefore, we predict a tight game with the win going to the Atlanta Falcons.

The New York Giants and the Seattle Seahawks will meet Sunday at the MetLife Stadium for NFL action. The Seattle Seahawks will look for their third consecutive win to maintain the pace in the NFC West division. The Seahawks have lost 5 of their last 8 road games. Russel Wilson has completed 62.4% of his passes for 1,222 yards, 8 touchdowns, and 3 interceptions. Russel Wilson has 1 or less touchdown passes in 8 of his last 12 games. Paul Richardson and Doug Baldwin have combined for 492 receiving yards and 3 touchdowns while Tyler Lockett has a total of 16 receptions. The ground game of the Seahawks is on average 109.2 yards per game, and Chris Carson is leading the way with 49 carries on 208 yards. Looking at the defense, the Seahawks are allowing 330 yards and 17.4 points per game. Bobby Wagner is leading the Seattle Seahawks with 41 tackles, Nazair Jones has 1 interception, and Michael Bennett has 4 sacks.

The New York Giants will look for back-to-back victories to finally climb out of their 1-5 hole. The Giants have managed to win 6 of their last 8 home games. Eli Manning has completed 67% of his passes for 1,466 yards, 9 touchdowns, and 5 interceptions. Manning has 1 or less touchdown passes in 5 of his 8 games. Evan Engram and Odell Beckham Jr. have combined for 584 receiving yards and 5 touchdowns while Sterling Shepard has a total of 22 receptions. The ground game of the New York Giants is on average 89.5 yards per game, and Orleans Darkwa is leading the way with 1 touchdown and 239 yards. Looking at the defense, the Giants are allowing 371.8 yards and 22 points per game. B.J Goodson is leading the New York Giants with 38 tackles, Darian Thompson has 1 interception, and Jason Pierre-Paul has 4.5 sacks.

The Spread: Seahawks vs Giants

The New York Giants will be feeling great about themselves after defeating the Denver Broncos on the road as 2 touchdown underdogs, but don't go too crazy over one victory. The Broncos had more than 150 yards over the New York Giants and managed to hurt themselves with 3 turnovers. New York's offense is still rather limited due to issues with their offensive line as well as injuries to wide receivers, and week 6 was no different, only going 4-14 on third down and requesting Eli to only throw the ball 19 times. The Seattle Seahawks are certainly not the same team at home as they are on the road, but they will continue to play an excellent defense game that will continue in week 7 as they've also had an extra week to prepare. Therefore, we predict the New York Giants to take the win on Sunday.

The Green Bay Packers and the New Orleans Saints will meet at Lambeau Field on Sunday for NFL Acton. The New Orleans Saints will look for their fourth consecutive victory to maintain their pace in a competitive NFC South division. The Saints have managed to split their last 8 road games. Drew Brees has completed 68.9% of his passes for 1,321 yards, 2 interceptions, and 10 touchdowns. Brees has 2 or more touchdown passes in 6 of his 8 games. Ted Ginn Jr. and Michael Thomas have combined for 533 receiving yards and 4 touchdowns while Mark Ingram has a total of 20 receptions. The ground game of the New Orleans Saints is on average 113.8 yards per game, and Ingram is leading the way with 2 touchdowns and 284 yards. Looking at the defense, the Saints are allowing 369.2 yards and 23.2 points per game. A.J Klein is leading the Saints with 26 tackles, Kenny Vaccaro has 2 interceptions, and Cameron Jordan has 5 sacks.

The Green Bay Packers are hoping to remain undefeated at home and maintain their lead in the NFC North division. The Green Bay Packers have won 6 consecutive home games. Brett Hundley has completed 55.9% of his passes for 157 yards, 1 touchdown, and 3 interceptions. Hundley will enter the game with only 44 career pass attempts to his name. Jordy Nelson and Davante Adams have combined for 629 receiving yards and a total of 11 touchdowns while Randall Cobb has a total of 26 receptions. The ground game of the Green Bay Packers is on average 88.3 yards per game, and Aaron Jones is leading the way with 2 touchdowns and 215 yards. Looking at the defense, the Packers are allowing 326.2 yards and 22.5 points per game. Black Martinez is leading the Packers with 48 tackles, Damarious Randall has 2 interceptions, and Clay Matthews has 2.5 sacks.

The Spread: Saints vs. Packers

The New Orleans Saints are playing exceptional football right now, including a victory over the Carolina Panthers on the road as well as dropping 52 points in week 6 against a strong Lions squad. The Green Bay Packers are constantly finding ways to win despite an almost endless injury list, but that had a lot to do with their quarterback Aaron Rodgers. Unfortunately, he is out with a broken collarbone and Hundley gets the nod. Although there are more contributing factors than just the QB position, at the end of the day the Packers need to score points and we don't think they can do it. Therefore, we are going with the New Orleans Saints for the win on Sunday.

Week 7 of the NFL season is around the corner and a chaotic NFL is an exciting NFL, even if it makes picks against the spread, poker rankings, and lines extremely difficult. The league is extremely crazy as we head into week 7 and would-be bettors have to risk capitalizing on early betting lines ahead of the action. With this in mind, there is no better Canadian sportsbooks than Pinnacle Sports and Sports Interaction for all your football betting needs, offering some of the most competitive lines in the business.

If this is your first online betting experience and would like to place a wager on your favorite NFL team this weekend, be sure to first browse through our helpful and informative sports betting in Canada article that will show you everything you need to know before heading over to one of our highly rated sportsbooks.

There are loads of incredible sports betting possibilities available in week 7 of the NFL, and with the top three matchups discussed in detail above, and utilising one of Canada's best sportsbook's, you can definitely walk away with some serious cash this weekend.