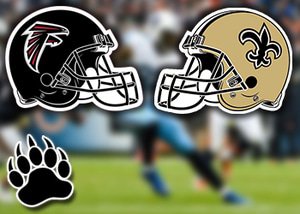 Week 16 of the NFL season will provide mini-bye weeks for a handful of lucky teams, as there are no games lined up for Thursday. Given the fact that Christmas falls on a Monday, along with the NFL's decision to feature games on Saturday in Week 15 and Week 16, there will be two games on Saturday, followed by two games on Monday this week. Week 15 saw several NFL teams punch their tickets for the NFL postseason, including the Jaguars who haven't managed to advance to this level since 2007. In Week 16, the Eagles can claim home advantage throughout the playoffs by snatching a win against the Oakland Raiders, while the Rams will look to clinch the NFC West title, which can be achieved with either a tie or a win against the Tennessee Titans. We at Grizzly Gaming took another in-depth look at the slate of matchups in Week 16 of the NFL to provide you with early point spreads, guaranteed wins, and possible upsets on three of the most action-packed games this weekend that is sure to be filled with an abundance of drama and excitement. We did the necessary research and legwork to provide you with valuable information before you decide to place your bet on the football sports betting action for week 16.

Week 15 of the NFL provided explosive action with a brand-new leader on top of the AFC division along with 5 playoff spots accounted for. This means that there are only 7 slots remaining that need to be claimed in the final two weeks of the 2017 NFL season. The catch rule bit the Pittsburgh Steelers and probably scampered their chances to claim home-field advantage, while the Patriots managed to clinch the AFC East, allowing them to reclaim pole position for home-field advantage in the playoffs. The Jaguars managed to clinch a berth against the Texans, the Chiefs have a two-game lead after claiming a win against the Chargers, the Titans loss against the 49ers didn't help but they are still positioned ahead of the Ravens and Bills, and the Saints are a step closer to winning the NFC South after a win against the Jets. The Eagles win over the Giants allowed them to claim a first-round playoff bye, the Vikings clinched their second NFC North title after a victory against the Bengals, and the Falcons managed to claim a victory against the Buccaneers to maintain their pace in the NFC playoff field.

The Oakland Raiders and the Atlanta Falcons will meet at the Mercedes-Benz Superdome on Sunday for NFL action. The Falcons have won 5 of their last 6 games and require another win to stay in the NFC playoff race. The Falcons have won 3 of their last 4 games on the road. Matt Ryan has completed 65.2% of his passes for 3,490 yards, 11 interceptions, and 18 touchdowns. He has one of less TD passes in each of his last 4 games. Mohamed Sanu, along with Julio Jones, has 8 touchdowns and 1,816 receiving yards combined, while Austin Hooper has a total of 49 receptions. The Falcons ground game is on average 122.9 yards per game, and Devonta Freeman is leading with 806 yards and 7 touchdowns. The Falcons defense is allowing 323.6 yards and 20.1 points per game. Robert Alford has a total of 16 pass deflections, Adrian Clayborn has 9.5 sacks, and Deion Jones has 118 tackles for the Atlanta Falcons.

The New Orleans Saints would like to keep the ball rolling after claiming 10 wins in their last 12 games. The Saints have won 6 straight games at home. Drew Brees has completed 71.8% of his passes for 3,850 yards, 7 interceptions, and 21 touchdowns. He has two or more TD passes in 4 of his last 8 games. Alvin Kamara, along with Michael Thomas, have 10 touchdowns and 1,749 receiving yards combined, while Ted Ginn Jr. has a total of 46 receptions. The Saints ground game is on average 135.1 yards per game, and Mark Ingram is leading with 11 touchdowns and 1,045 yards. The Saints defense is allowing 328.4 yards and 20.1 points per game. Marshon Lattimore has 4 interceptions, Cameron Jordan has 10 sacks, and Vonn Bell has 70 tackles for the New Orleans Saints.

The Spread: Falcons vs. Saints

The Saints had the opportunity to defeat the Falcons on the road a few weeks ago, so playing this game at home with the Falcons on short rest is a great spot. The Atlanta Falcons are doing a terrific job at claiming victories, but they are struggling with putting teams away and might have easily been on the losing end in several of their previous games. The Saints have been remarkable at home this season with multiple double-digit wins, and if Atlanta continues to struggle with their offense, this will be another game that could get extremely ugly. It's for this reason that we are backing the Saints to win by a touchdown.

The Tennessee Titans and the Los Angeles Rams will make their way to the Nissan Stadium for Sunday NFL action. The Los Angeles Rams will look for another victory on the road to inch closer to claiming the top seed in the NFC division. The Rams have won 6 of their last 7 road games. Jared Goff has completed 62.4% of his passes for 3,503 yards, 7 interceptions, and 24 touchdowns. He has two or more TD passes in 6 of his last 7 games. Robert Woods, along with Cooper Kupp, have 9 touchdowns and 1,368 receiving yards combined, while Todd Gurley II has a total of 54 receptions. The ground game of the Rams is on average 123.9 yards per game, and Gurley is leading with 1,187 yards and 13 touchdowns. The Los Angeles Rams defense is allowing 328.9 yards and 19.4 points per game. Lamarcus Joyner has 3 interceptions, Aaron Donald has 11 sacks, and Alec Ogletree has 90 tackles for the Los Angeles Rams.

The Tennessee Titans will need to snap a win this weekend to stay in the playoff race. The Titans have won 5 straight games at home. Marcus Mariota has completed 62.9% of his passes for 2,823 yards, 14 interceptions, and 12 touchdowns. He has one of less TD passes in 5 of his last 6 games. Rishard Matthews, along with Delanie Walker, has 7 touchdowns and 1,495 receiving yards combined, while Eric Decker has a total of 45 receptions. The Titans ground game is on average 115.7 yards per game, and Derrick Henry is leading with 668 yards and 5 touchdowns. The Titans defense is allowing 329.8 yards and 22.8 points per game. Kevin Byard has 6 interceptions, Derrick Morgan has 7.5 sacks, and Wesley Woodyard has 116 tackles for the Tennessee Titans.

The Spread: Rams vs. Titans

We've managed to make a decent amount of money on the Rams in the 2017 NFL season, as they have been extremely consistent in the league, quieting down the doubters' week after week. The Titans, on the other hand, are up and down and are walking onto the field after two awful losses to the 49ers and Cardinals. However, you unable to place too much stock into matchups week to week in the NFL, as you're never as good or bad as you performed the previous week. The Tennessee Titans are still in the playoff race and managed to win 5 straight games at home. The Los Angeles Rams are looking extremely sharp after receiving praise for their victory against the Seattle Seahawks, but getting too much love from the public means that we are taking the Tennessee Titans for the win at home this weekend.

The Cincinnati Bengals and the Detroit Lions will make their way to the Paul Brown Stadium for NFL action on Sunday. The Detroit Lions will look for their third straight win to remain in the NFC playoff race. The Lions have won 4 of their last 6 road games. Matthew Stafford has completed 66.3% of his passes for 3,920 yards, 9 interceptions, and 25 touchdowns. He has two or more TD passes in 5 of his last 7 games. Golden Tate, along with Marvin Jones, has 12 touchdowns and 1,855 receiving yards combined, while Eric Ebron has a total of 47 receptions. The ground game of the Lions is on average 77.4 yards per game, and Ameer Abdullah is leading with 513 yards and 3 touchdowns. The Lions defense is allowing 362.3 yards and 24.2 points per game. Darius Slay has 7 interceptions, Anthony Zettel has 6.5 sacks, and Tahir Whitehead has 95 tackles for the Detroit Lions.

The Cincinnati Bengals will look to play spoiler after experiencing a three-game losing streak. The Bengals have split their last 6 games at home. Andy Dalton has completed 60.1% of his passes for 2,860 yards, 11 interceptions, and 21 touchdowns. He has two or more TD passes in 6 of his last 9 games. Brandon LaFell, along with A.J Green, has 11 touchdowns and 1,485 receiving yards combined, while Tyler Kroft has a total of 35 receptions. The Bengals ground game is on average 77 yards per game, and Joe Mixon is leading with 518 yards and 4 touchdowns. The Bengals defense is allowing 345.5 yards and 21.8 points per game. Geno Atkins has 9 sacks, Nick Vigil has 79 tackles, and Darqueze Dennard has 1 interception.

The Spread: Lions vs. Bengals

The Lions have managed to play their most consistent and best football this season on the road, and they will need to keep winning to remain in the playoff race. The Bengals are still considered a talented football team, but unfortunately, the losses keep piling up, as the offense have only managed to produce 14 points in the last 2 games. It goes without saying that the Bengals are a mess, making it extremely difficult to get behind the team. The Lions should easily win the game by at least a touchdown.

Week 16 is sure to offer another sensational weekend of remarkable NFL matchups on Saturday, Sunday, and Monday as teams will do their absolute best to try and make it into the playoffs. There are also loads of other nail-biting games on the roster for Week 16 apart from the 3 football games mentioned above. You can view every single matchup at Sports Interaction, providing early odds that can lead to some profitable earnings. If you would like to try another incredible sportsbook, you can head over to Spin Palace Sports for something new with competitive odds.

With only two weeks left in the regular NFL season for 2017, there will be a significant increase with bets coming through from average Joe's, as well as professional bettors, who would like to increase their bankroll before the playoffs. If you are someone that would like to know everything there is to know about NFL betting, or just need to brush up on your sports betting knowledge before the big matchups, you can head over to our complete sports betting in Canada articles surrounding football betting. Now that you have the edge over the bookmakers, you can take your new-found knowledge on Week 16 of the NFL and place a winning bet.