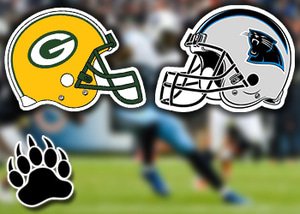 It's Week 15 of the NFL season, and we at Grizzly Gaming have another round of NFL picks to help you survive what is sure to be another action-packed weekend. The playoffs for the 2017 NFL season is only a few weeks away, and before you know it, the postseason action will get underway, and the Super Bowl will be on the horizon. If you unsure what to do with yourself on Saturdays, now that the regular season of college football is over, you can rest assured knowing that the NFL is here to help. Week 15 will broadcast NFL games on Saturday, in addition to Monday, Sunday, and Thursday. The Detroit Lions and Chicago Bears will meet on Saturday afternoon, while the Kansas City Chiefs and the Los Angeles Chargers will clash on Saturday evening. To assist you in making it through the weekend, we picked three of the best upcoming games for week 15. We might not hit the nail on the head with each of them, but you can rest assured that we did the necessary research to make well-informed decisions on the football sports betting action for week 15.

There were no NFL teams that punched a playoff ticket in the first 13 weeks, but that finally changed in Week 14 of the NFL. The Philadelphia Eagles were the first to claim a postseason berth after their win against the Los Angeles Rams, giving them the NFC East title, while the Pittsburgh Steelers joined them after beating the Baltimore Ravens on Sunday to lock down the AFC North division. As it stands, there are only two teams that will be playing in January. The Patriots should have been crowned AFC East champions on Monday, but they failed to beat the Dolphins. The Minnesota Vikings lost against the Panthers and will need to wait for week 15 for another shot at the title. If anything, Week 14 of the NFL made the power structure even more complicated. The Saints were beaten by the Falcons, The Cowboys and Packers managed to stay alive, the Kansas City Chiefs remain at the top of the AFC West division, and it seems that the next three weeks will offer loads of additional drama.

The Oakland Raiders and Dallas Cowboys will meet at the Oakland Coliseum on Sunday evening for NFL action. The Dallas Cowboys will look for three straight victories to keep their playoff hopes in the NFC alive. The Cowboys have won 4 of their last 5 games on the road. Dak Prescott is completing 63.2% of his passes for 2,752 yards, 9 interceptions, and 21 touchdowns. He has 2 or more TD passes in 6 of his last 10 games. Terrance Williams, along with Dez Byrant have 1,212 receiving yards and 6 touchdowns combined, while Jason Witten has a total of 52 receptions. The Cowboys ground game is on average 137.5 yards per game, and Ezekiel Elliot is leading with 783 yards and 7 touchdowns. The Cowboys defence is allowing 341.6 yards and 22.6 points per game. DeMarcus Lawrence has 13.5 sacks, Jaylon Smith has 76 tackles, and Jeff Heath has 3 interceptions for the Dallas Cowboys.

The Oakland Raiders will also look for a win after splitting their last 8 games to continue being part of the AFC playoff conversation. The Raiders have won 3 of their last 4 games at home. Derek Carr has completed 63.8% of his passes for 2,942 yards, 10 interceptions, and 18 touchdowns. He has 1 TD pass in 5 of his last 6 games. Michael Crabtree, along with Jared Cook, has 8 touchdowns and 1,183 receiving yards combined, while Amari Cooper is sitting with 42 receptions. The Raiders ground game is on average 91.5 yards per game, and Marshawn Lynch is leading with 619 yards and 7 touchdowns. The Raiders defence is allowing 346 yards and 23.2 points per game. Khalil Mach has 8.5 sacks, TJ Carrie has 71 tackles, and Denico Autry has 7 pass deflections.

The Spread: Cowboys vs. Raiders

The Cowboys have managed to combine back-to-back victories to keep their hopes alive for the playoffs. However, each of those wins were against weak NFC East teams. The Cowboys have been up and down this season, and although they've recently had sensational victories, they are still only averaging 18 points in their last 5 games. The Oakland Raiders are returning after a difficult loss to the Chiefs, but they perform much better while playing at home that will also feature a better Derek Carr. In addition, the Cowboys are making a long trip from New York to play against the Raiders and the long distance will also have a negative impact on the team. Furthermore, Oakland have more to play for in the AFC West division, while the Cowboys are desperately holding on to wild-card hopes. Therefore, we are siding with the Oakland Raiders on Sunday.

The Cleveland Browns and the Baltimore Ravens are meeting at the FirstEnergy Stadium on Sunday evening for NFL action. The Baltimore Ravens are in desperate need of a victory after slitting their previous 12 games, and a victory against the Browns will keep them in the playoff conversation. The Ravens have lost 4 of their last 6 games on the road. Joe Flacco has completed 64.5% of his passes for 2,413 yards, 12 interceptions, and 13 touchdowns. He has 1 or less touchdown passes in 7 of his last 10 games. Burnell Michael Wallace, along with Jeremy Maclin, have 6 touchdowns and 977 receiving yards combined, while Benjamin Watson has a total of 45 receptions. The Ravens ground game is on average 118.3 yards per match, and Alex Collins is leading with 825 yards and 5 touchdowns. Baltimore's defence is allowing 329.2 yards and 18.9 points per game. Terrell Suggs has 11 sacks, Eric Weddle has 5 interceptions, and C.J Mosley has 115 tackles for the Baltimore Ravens.

The Cleveland Browns are still trying to get their first victory for the 2017 NFL season. The Browns have lost 7 straight games at home. DeShone Kizer has completed 53.9% of his passes for 2,252 yards, 9 touchdowns, and 17 interceptions. He has less than one touchdown passes in eight of his last nine games. Seth DeValve, along with Duke Johnson Jr, has 4 touchdowns and 848 receiving yards combined, while David Njoku has a total of 29 receptions. The Browns ground game is on average 108.2 yards per game, and Isaiah Crowell is leading with 716 yards and 2 touchdowns. Cleveland's defence is allowing 328.3 yards and 25.8 points per game. Myles Garrett has 5 sacks, Jason McCourty has 3 interceptions, and Joe Schobert has 122 tackles for the Cleveland Browns.

\ The Spread: Ravens vs. Browns

The Browns have provided some exciting football recently despite experiencing loss after loss. This is especially true against the Green Bay Packers last week where they managed double-digits only to lose the game in overtime. Kizer is returning after the best football game of his career, and with Josh Gordon returning to the fold, its also provided a significant boost for the team. On the other hand, the Ravens are currently playing the best football of the 2017 NFL season and are accumulating decent points now that the team is healthy. Baltimore is also still playing for something, and currently, have a strong defence that is ranked second in the NFL with an amazing 29 forced turnovers. Cleveland will have a difficult time putting points on the board. Therefore, we believe the Ravens will control this game quite easily while adding double digits on the board for the win.

The Carolina Panthers and the Green Bay Packers will meet at the Bank of America Stadium for NFL action on Sunday evening. The Green Bay Packers will look for three straight victories to remain in the NFC wild-card race. The Packers have split their last 6 games on the road. Brett Hundley has completed 63.9% of his passes for 1,534 yards, 8 interceptions, and 8 touchdowns. Aaron Rodgers also hopes to return on Sunday after a collarbone injury in October. Randall Cobb, along with Davante Adams, has 11 touchdowns and 1,330 receiving yards combined, while Jordy Nelson has a total of 47 receptions. The Packers ground game is on average 106.8 yards per game, and Aaron Jones is leading with 388 yards and 4 touchdowns. Green Bay's defence is allowing 354.1 yards and 23.2 points per game. Clay Matthews has 7.5 sacks, Blake Martinez has 119 tackles, and Damarious Randall has 4 interceptions.

The Carolina Panthers will look for another much-needed victory after winning 5 of their last 6 games to remain in the NFC South race. The Panthers have won 3 straight games at home. Cam Newton has completed 60% of his passes for 2,720 yards, 12 interceptions, and 17 touchdowns. Newton has one or less TD passes in 6 of his last 8 games. Christian McCaffrey, along with Devin Funchess, has 11 touchdowns and 1,281 receiving yards combined, while Kelvin Benjamin has a total of 32 receptions. The Panthers' ground game is on average 134.5 yards per game, and Jonathan Steward is leading with 634 yards and 6 touchdowns. Carolina's defence is allowing 302.1 yards and 20.2 points per game. Julius Peppers has 9.5 sacks, Mike Adams has 2 interceptions, and Luke Kuechly has 103 tackles.

The Spread: Packers vs. Panthers

This is a difficult game to predict as everyone is still unsure if Aaron Rogers will be fit to play. We're assuming he will be ready for the game on Sunday, and if he is cleared, the Packers should win the game outright. Regardless of what's going on in the team, you always pick the Packers due to number 12. It doesn't matter if the defence is struggling, or if the offensive line is unable to block. Rodgers is someone that will figure it out. The Panthers have managed to claim a couple of victories and experienced an impressive win against the Vikings. However, Carolina is never a consistent team, and if Rodgers is in the line up on Sunday, the Panthers don't stand chance. Therefore, we are backing the Packers for the win this weekend.

Week 15 will offer another sensational line-up of incredible NFL games that will provide excitement for both professional and would-be bettors. There's also plenty of entertaining games available on Thursday, Saturday, Sunday, and Monday apart from the three upcoming games we included above. To get a glimpse of the NFL action this weekend, you can head over to Sports Interaction, offering some of the most competitive lines in the industry. If you wish to compare betting lines with another leading sportsbook, you cannot go wrong with Bodog.

As we reach the final weeks of the NFL regular season, more recreational bettors will try their luck at NFL betting to make a winning bet. Those that wish to get into NFL betting will first need to understand the different betting types and include an optimal betting strategy to become a successful bettor. The best starting point, providing all the betting information you need, is our comprehensive sports betting in Canada articles. Here you will find everything you need to transform your NFL knowledge into long-term profits. With week 15 on the horizon, take our in-depth research on the above mentioned games and turn your wager into a winning bet at any of our recommended sportsbooks.