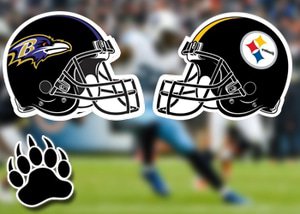 Week 14 of the NFL season is upon on us, and the path doesn't seem to get any easier for those wanting to make NFL picks. The final stretch of the 2017 season means even bookmakers will struggle to correctly project matchups, ensuring both professional bettors and average Joes will make a bet this week. Divisional and rivalry games will feature bad teams that will look to play the spoiler, while great teams will look to avoid any injuries ahead of what could be a playoff run. With NFL odds constantly on the move and several astonishing NFL games on the schedule for week 14, we at Grizzly Gaming filtered through all the matchups and provided the top 3 NFL games that we believe deserves your attention. We might not be able to guarantee that each game will be on the money, but we did the necessary research to assist you in making a more educated prediction on your football sports betting action in week 14.

Week 13 of the NFL featured a magnificent debut by Jimmy Garoppolo for the 49ers, beating the Bears 14-15 on Sunday, as well as an overtime battle between the Tampa Bay Buccaneers and the Green Bay Packers, ending in a 26-20 victory for the Packers. The Cleveland Browns welcomed back Josh Gordon as wide receiver, and Geno Smith will make his first start for the New York Giants this season after Eli Manning got benched in week 13. The Titans beat the annoying Texans with a 24-13 win to hold on to their AFC South lead, the Jets beat the Chiefs in an astonishing 38-31 victory, the Patriots shut down the Bills, beating their rivals 32-3, the Jaguars dominated the Colts 30-10 thanks to excellent defense, and the Vikings beat the Falcons in a superb 14-9 victory. The most surprising news is the AFC West division currently featuring three 6-6 teams all tied at the top, including the Kansas City Chiefs, The Oakland Riders, and the Los Angeles Chargers.

The Kansas City Chiefs and the Oakland Raiders will meet at the Arrowhead Stadium on Sunday evening for NFL action. The Oakland Raiders are looking for three straight victories to remain in the AFC playoff race. The Raiders have lost 3 of their last 4 games on the road. Derek Carr is carrying out 64.4% of his passes for 2,731 yards, 8 interceptions, and 17 touchdowns. He has one TD pass in 7 of his last 9 games. Michael Crabtree, along with Jared Cook, have 7 touchdowns and 1,048 receiving yards combined, while Amari Cooper has a total of 42 receptions. The Raiders ground game is on average 93.3 yards per game, and Marshawn Lynch is leading with 558 yards and 6 touchdowns. The Raiders defense is allowing 346 yards and 23.2 points per game. Khalil Mack has 7.5 sacks, Reggie Nelson is leading with 65 tackles, and TJ Carrie has 5 pass deflections for the Oakland Raiders.

The Kansas City Chiefs will look for a much-needed victory after their defeat against the New York Jets to remain in the AFC playoff race. The Chiefs have lost 6 of their last 12 games overall. Alex Smith is carrying out 64.9% of his passes for 3,239 yards, 4 interceptions, and 23 touchdowns. He has 2 or more TD passes in 4 of his last 8 games. Travis Kelce, along with Tyreek Hill, have 13 touchdowns and 1,782 receiving yards combined, while Kareem Hunt has a total of 39 receptions. The Chiefs ground game is on average 112.6 yards per game, and Kaleem Hunt is leading with 930 yards and 4 touchdowns. The Chiefs defense is allowing 328.2 yards and 22.8 points per game. Justin Houston has 8.5 sacks, Marcus Peters has 3 interceptions, and Daniel Sorensen has 78 tackles for the Kansas City Chiefs.

The Spread: Raiders vs. Chiefs

The only reason to back the Kansas City Chiefs in this matchup is because it's a must-win game. The Chiefs need to bounce back after a 4-game losing streak to take control over the AFC West division. On the other hand, you can make the same argument for the Raiders, a football team that has managed to win 3 of their last 4 games. The Kansas City Chiefs have fallen apart as they lost against the Jets, Bills, and the Giants, so there's no reason to stand behind this team anymore. The Raiders are an outstanding football team, playing some of the best football this season. They are also receiving Michael Crabtree back on the field to improve the team even further. So, we predict the Oakland Raiders will win the game outright this weekend.

Baltimore Ravens (7-5) at Pittsburgh Steelers (10-2): First Upset of the Week

The Pittsburgh Steelers and the Baltimore Ravens will meet at the Heinz Stadium for NFL action on Sunday evening. The Baltimore Ravens will look for 4 straight victories to remain in the wild card race in the AFC. The Ravens have split their last 6 games on the road. Joe Flacco is carrying out 65.1% of his passes for 2,144 yards, 11 interceptions, and 11 touchdowns. He has one of less TD passes in 8 of his last 10 games. Jeremy Maclin, along with Mike Wallace, have 6 touchdowns and 878 receiving yards combined, while Benjamin Watson has a total of 45 receptions. The Ravens ground game is on average 115.5 yards per game, and Alex Collins leads with 705 yards and 4 touchdowns. The Ravens defense is allowing 311.3 yards and 17.3 points per game. Terrell Suggs has 10.5 sacks, Eric Weddle has 5 interceptions, and C.J Mosley has 101 tackles for the Baltimore Ravens.

The Pittsburgh Steelers will want to continue building on their 7-game winning streak for the top AFC seed. The Steelers have won 3 straight games at home. Ben Roethlisberger is carrying out 62.8% of his passes for 3,238 yards, 13 interceptions, and 22 touchdowns. He has 2 or more TD passes in 5 of his last 6 games. JuJu Smith-Schuster, along with Antonio Brown, have 1,881 receiving yards and 14 touchdowns combined, while Le'Veon Bell has a total of 66 receptions. The Steelers ground game is on average 103.1 yards per game, and Le'Veon Bell leads with 1,057 yards and 5 touchdowns. The Steelers defense is allowing 294.7 yards and 17.8 points per game. Cameron Heyward has 9 sacks, Mike Hilton has 2 interceptions, and Ryan Shazier has 89 tackles for the Pittsburgh Steelers.

The Spread: Ravens vs. Steelers

The Monday night game between the Steelers and the Bengals showed us just how physical and nasty AFC North games truly are. Games in the AFC North division come down to the wire and are usually very low scoring. This matchup will certainly be the same. The Ravens offensive play is finally healthy, allowing Flacco to become a difference maker, while the ground game of the Ravens have picked up considerably over the last few weeks. The Steelers continue to find ways to win, but 5 of their last 7 games were decided by 6 or less points. In addition, 4 of the last 5 meetings between the Steelers and the Ravens were decided by 6 points or less. Therefore, we will side with the Baltimore Ravens for the win.

The New York Giants and the Dallas Cowboys will meet at the MetLife Stadium on Sunday for NFL action. The Dallas Cowboys require a huge road victory to get an above .500 record. The Cowboys have won 3 of their last 4 games on the road. Dak Prescott is carrying out 62.9% of his passes for 2,420 yards, 9 interceptions, and 18 touchdowns. Prescott has 0 TD passes in 4 of his last 6 games. Terrance Williams, along with Dez Byrant, have 1,105 receiving yards and 5 touchdowns combined, while Jason Witten has a total of 51 receptions. The Cowboys ground game is on average 138.8 yards per game, and Ezekiel Elliot is leading with 783 yards and 7 touchdowns. The Cowboys defense is allowing 342.6 yards and 23.7 points per game. DeMarcus Lawrence has 13.5 sacks, Jeff Heath has 2 interceptions, and Jaylon Smith has 71 tackles for the Dallas Cowboys.

The New York Giants will be playing spoiler to a rival team while trying to gain a second win at home for the 2017 season. The Giants have lost 4 of their last 5 games at home. Eli Manning is carrying out 62.5% of his passes for 2,411 yards, 7 interceptions, and 14 touchdowns. Manning has 1 or less TD passes in 4 of his last 6 games. Sterling Shepard, along with Evan Engram, have 1,100 receiving yards and 7 touchdowns combined, while Odell Beckham Jr. has a total of 25 receptions. The Giants ground game is on average 89.1 yards per game, and Orleans Darkwa is leading with 551 yards and 3 touchdowns. The Giants defense is allowing 390.8 yards and 24.3 points per game. Janoris Jenkins has 3 interceptions, Jason Pierre-Paul has 6.5 sacks, and Landon Collins has 95 tackles for the New York Giants.

The Spread: Cowboys vs. Giants

The betting line is all over the place, as we suspect sportsbooks are still adjusting to the latest news of Eli starting as quarterback along with Bob Mcadoo being fired as head coach. Either way, the Dallas Cowboys should win the game by a touchdown. The Giants simply don't have enough bodies in great shape to scare any team. The Cowboys are playing after a mini bye week, and managed to play a decent game against the Redskins where the offensive line showed up, while the defense managed to force 4 turnovers. Dallas also need to win to have a chance at getting into the playoffs.

Week 14 will provide a great selection of high-octane matchups that will feature surprising upsets, high scores, and plenty of excitement for bettors. There's also loads of other interesting games available on Thursday and Monday to look forward to apart from the top 3 games we listed above. You can find the complete schedule with the latest betting lines at Sports Interaction. Should you wish to compare the betting odds with another leading Canadian sportsbook, you are more than welcome to have a look at Real Deal Bet.

As we reach the end of the 2017 NFL regular season, more bettors will be trying their luck at one of the most watched sports in the world. If you are looking for NFL betting strategies and tips, or wish to understand the various betting markets in the NFL, your first and only stop should be our complete sports betting in Canada guide guide. Now that you have everything you need for the upcoming matches in week 14, head over to one of our highly recommended sportsbooks and place a winning bet.