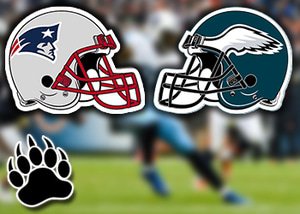 Super Bowl week is finally here. The Philadelphia Eagles and the New England Patriots will battle it out in Minneapolis at the U.S Bank Stadium on Sunday, February 4, with the privilege of hosting the prestigious Lombardi Trophy when all is said and done.

The Philadelphia Eagles will be looking to claim their first-ever Super Bowl triumph in franchise history, while the New England Patriots will be looking to solidify their legacy and dynasty as the most dominant NFL team since the turn of the century. The uniform combinations have also been decided and both teams have reason to be confident in what they'll be wearing.

As the home team, the Patriots have elected to wear their white jerseys as history indicates that these jerseys are extremely triumphant and have been undefeated when wearing white in Super Bowls. Meanwhile, the Eagles won their playoff games while wearing green and have won all but one game during the 2017 regular season in their home colours. We at Grizzly Gambling took a final look at the most important game of the National Football League and did the necessary research to assist you when it comes to making a prediction on who will hoist the Lombardi Trophy on Sunday evening. Our valuable insight on the most anticipated match of the NFL season will give you the much-needed edge to make a more educated decision on the football sports betting action prior to Super Bowl 52 this weekend.

The Conference Championships featured two of the most entertaining matchups in the NFL, leading to one of the most explosive weekends in terms of football as well as sports betting. The first game featured the Jacksonville Jaguars against the New England Patriots. Although he had an injured throwing hand, the greatness of Tom Brady didn't disappoint. Brady rallied the Patriots from an unbelievable 10-point shortfall, during the fourth-quarter, past the Jaguars to the 8th Super Bowl of his career. Tight end, Rob Gronkowski, suffered a concussion just before halftime leaving Danny Amendola to assist in the effort. The Patriots 20-24 win marked the 54th time Tom Brady engineered a game-changing performance to lead the New England Patriots to a victory.

The second game featured the Philadelphia Eagles and the Minnesota Vikings. The Eagles were considered the underdogs heading into the game but surprisingly Nick Foles, the Eagles quarterback, shocked everyone with his performance and essentially destroyed Super Bowl dreams for the Minnesota Vikings. The Vikings were nothing short of disgraceful, while the Eagles were nothing short of remarkable. The Philadelphia Eagles never let up in their NFC Championship victory over the Minnesota Vikings, 38-7. Nick Foles implemented quick throws that kept the Vikings pass rush under control and scored 24 points before halftime. The Eagles provided a sensational performance even when everyone was expecting a low-scoring game and when they were considered the underdogs at home. Now they're on their way to the Super Bowl.

The Philadelphia Eagles and the New England Patriots will meet at the U.S Bank Stadium on Sunday for Super Bowl 52. The New England Patriots stand a chance to claim their 6th Super Bowl title in the history of the franchise since 2001. The Patriots have won 7 of their last 8 non-home games. New England is returning to the Super Bowl for the 2nd straight season and the 8th time in the last sixteen years. The defense of the Patriots played extremely well in both their playoff victories and Tom Brady was in excellent form as well. Brady accumulated 627 passing yards with 5 touchdowns and 0 interceptions in the two playoff victories, and his injured hand didn't seem to bother him at all. He now boasts with a tremendous 69 touchdowns and 31 interceptions in 37 playoff games of his career. Danny Amendola and Brandin Cooks both performed well under the pressure against the Jaguars and combined for 184 receiving yards.

The Patriots might need them again this weekend as Rob Gronkowski suffered a severe concussion, leaving him questionable for Super Bowl 52. An absent Gronkowski will play a huge factor, but it's also worth noting that the Patriots didn't have him last year. Danny Amendola left an impression in both playoff wins, accumulating a total of 196 yards with 18 catches. Dion Lewis, the leading rusher for the Patriots, only accumulated 34 yards with 9 carries against the Jaguars and will likely not see a lot of action against Philadelphia's sensational rush defense. New England finished their regular season in second position in the passing game, averaging 28.6 points per contest which ranked them second in the NFL.

The Philadelphia Eagles stand a chance to claim their first ever Super Bowl title in history for the franchise and the first overall championship since 1960. The Eagles have won 6 of their last 8 non-home games. The Eagles were considered the underdogs in both playoff games but thanks to their outstanding defense, they are entering the Super Bowl for the third time. The Eagles offense did massive damage against the Minnesota Vikings, accumulating a total of 456 yards. Nick Foles looked spectacular as he filled in for Carson Wentz who is currently injured, accumulating 598 passing yards for 3 touchdowns and 0 interceptions during the two playoff games. Jay Ajayi had great success against the defense of the Vikings, accumulating 18 carries for 73 yards, and is now boasting with 127 rushing yards in two playoff matches. Zach Ertz might have been quiet during the Divisional game, but was remarkable against the Vikings, amassing 93 yards on 8 grabs.

The Eagles gained confidence in Nick Foles and managed to split their running and passing plays evenly. New England's pass defense did seem rather shaky against the Jaguars, and we expect the passing game of the Eagles to be quite aggressive. Philadelphia averaged 28.6 points during the regular season, placing them 3rd in the NFL.

The defense of the Eagles was remarkable in both their playoff games, only allowing 2 passing touchdowns and 0 rushing touchdowns. The Eagles forced Keenum to throw a total of 20 incomplete passes, only conceding 156 yards in total in their playoff matches. Patrick Robinson made a much-needed interception against the Minnesota Vikings and now boasts with 7 for the season. The Eagles finished their regular season with the number 1 spot when it comes to rush defense and were allowing 18.4 points on average which is good for 4th in the NFL.

The Spread: Eagles vs. Patriots

When the Philadelphia Eagles played against the Minnesota Vikings and the Atlanta Falcons, he said they would win as they have an excellent running game and a strong defense. We also gave the Jaguars a chance against the Patriots as they possess the same recipe, and although they didn't win, they managed to cover the number we care about most. Everybody tends to fall in love with quarterbacks, and although it's important, there's always an opportunity to win when locking up on defense and controlling the game with a terrific running game. The Philadelphia Eagles are entering the matchup with a complete team that fortunately didn't rely too much on Carson Wentz. In addition, we just witnessed Foles demolish the Vikings who are considered the best defense in the NFL.

We are sure there's a lot more confidence in Foles than ever before. People can point out that he accomplished it at home, and while playing at home does help, people were not assisting him with his throws downfield. The Eagles can move the ball on New England's defense, and they have the necessary weapons to completely expose it. Furthermore, the Eagles have an explosive pass rush that is more than capable of getting to Brady, and with Rob Gronkowski being knockout with a concussion, it doesn't help either. Physical edge plays a big role in the NFL, and the Eagles will certainly have the edge. You can expect a very tight game this weekend where we would like to see the Eagles hoisting the Lombardi Trophy for the first time in history.

The New England Patriots are considered the favourites to win against the Philadelphia Eagles by 5 points, but the Super Bowl - for most people watching - is merely an afterthought thanks to prop bets grabbing all the attention as an entertaining way to earn some extra money. Even if you don't enjoy gambling, it will be hard to resist a little entertainment with the wide selection of prop bets this year. You can bet on anything from the colour of Pink's hair to the final score of the match. There are also plenty of other betting odds available for the Super Bowl this weekend and we at Grizzly Gambling recommend paying a visit to Sports Interaction, ranked as the most trusted and reliable sports betting site in Canada. You will also find a wide range of truly competitive odds along with a user-friendly interface at Spin Palace Sports, considered one of the latest sports betting sites in Canada.

The NFL Super Bowl will see a wide spread of bettor's flood to their favourite sports betting sites to place their bets on who will hoist the Lombardi Trophy this year. We at Grizzly Gambling recommend going through our comprehensive list of sports betting sites in Canada for a wide variety of accredited sportsbooks. Now that you have everything you need ahead of the Super Bowl this weekend, make your betting selections, and walk away a winner. See you next season!