Over $1.6 Million Won on Major Millions 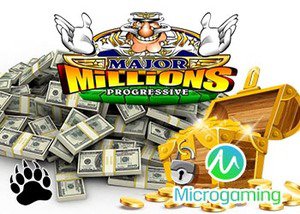 Major Millions is one of the top played progressive jackpot slot games offered at Microgaming Casinos. This game has paid millions and recently, a lucky player hit the slot and became the latest millionaire with a stunning win for over $1.6 million.

Major Millions has turned out some amazing wins over the years and the latest collection of the jackpot was the 63rd time the progressive game has been won by players online. On average, this jackpot is worth around $580,000, but it often rises to more than $1 million and many players have been lucky enough to become instant millionaires from a single spin. This amazing game can be found at many leading Microgaming Casinos, including Jackpot City Casino.

This exciting progressive game is one of the most popular at Microgaming powered casinos and it is a video slot that offers great base game payouts as well as a massive jackpot. The game is a 15 payline slot that pays players the jackpot reward when they get five wilds on the 15th payline of the game. The game wild is the logo and this can take the place of all other symbols except for the scatter. Scatters can appear in any position and will offer an instant win if three or more appear. Unlike other video slots from Microgaming, this game does not have a bonus feature, so players will be looking for winning combinations or the progressive payout when they play. Once the Major Millions jackpot is won, the jackpot amount is reset to $250,000 and will increase in size with every wager that is placed.

The Major Millions jackpot is one of the most sought-after online and for many years, players have been spinning the reels on this incredible game for their chance to become the next instant millionaire. The game has produced some hefty wins at various Microgaming casinos and the latest win was one of the highest recorded. The largest win to ever be received from the game was for $1.9 million and this was just won in May of 2017. This recent jackpot win is the fourth largest Major Millions jackpot to be won in the history of the game. The jackpot is now building again and players at many Microgaming casinos will be spinning for their chance to be the next Major Millions jackpot winner.