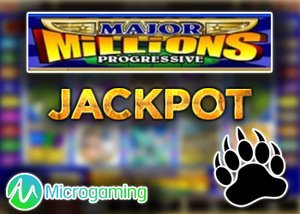 Microgaming's Major Millions slot brought great joy to an unexpected player when its progressive jackpot worth $711,135 triggered earlier this week.

The average jackpot awarded by Major Millions is $559,628, although the recent hit came only twelve days after the jackpot awarded a massive progressive payout worth $1.2 million, while its biggest payout ever recorded worth $1,945,884 occurred in May 2017.

Major Millions launched in 2002 and remains one of the most popular slots parts of Microgaming's progressive range, while its unique theme, high-quality graphics as well as generous rewards are all part of its esteem. Equipped with one of the highest rewarding online progressive jackpots the game features 15 paylines populated by symbols depicting military aircraft, battle tanks, battleships, top secret files and binoculars and players get to meet the major general in charge of the stealth operation across five reels. This high volatility Microgaming jackpot slot features several bonus features such as wilds, scatters, a bonus round and the progressive jackpot, triggerable via a maximum bet and five Major Million wilds appearing on the 15th payline. Eleven years after its launch, Major Millions was released on Microgaming's HTML5 mobile platform to provide mobile players access to one of the greatest progressive jackpots.

Microgaming powers some of the biggest online operators, like Mr Green Casino, which features one of the largest gaming collections. Even though the casino predominantly targets online players from Europe and the UK, it found favour with gamblers worldwide, due to excellent collection slots, live casino, jackpot, roulette, as well as blackjack and sports offerings. By registering new account players gain access to a combination of free spins and a conventional percentage match bonus. The Mr. Green Casino journey starts off with 20 no deposit free spins, while first deposits enjoy a 100% bonus worth up to $350.