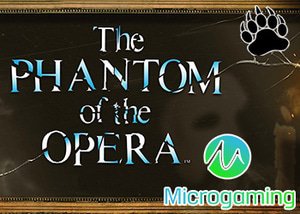 Listen to the music of the night in Microgaming's new The Phantom of the Opera slot.

Based on Andrew Lloyd Webber's timeless musical and the 2004 movie that brought this award-winning score to the big screen, the new Phantom of the Opera slot is everything you've ever imagined it would be ꟷ a magical journey through the reels with the most iconic songs ever written for the stage.

All About the Phantom of the Opera Slot from Microgaming

The new Phantom of the Opera Slot arrived at all Microgaming casinos this week and is presented in a colourful display of images and video clips from the movie which rotate around the reels in a cinematic display for a chance to unlock a variety of prizes. This 5 reel, 243 ways to win slot additionally offers a selection of themed bonus features, which are beautifully incorporated into the game for a trip down the Phantom's lair.

The Chandelier Bonus was inspired by a scene in the movie where the phantom angrily cuts down the chandelier. The feature is triggered at random and turns the entire screen dark, the music becomes moody and the phantom laughs as the chandeliers smashes onto the reels, thereby turning up to three reels wild.

The Masquerade Bonus is a multi-level pick bonus during which prizes are hidden behind beautifully decorated masks. The higher the tier, the more valuable the prizes become. Players will additionally receive extra picks as the journey through each level, thereby giving them more chances of winning. Then, once the player runs out of picks, the round ends too.

The Music of the Night Bonus is a free spins feature during which 10 spins are released while random enhancers, including wilds, multipliers, and extra spins, make their way onto the reels for a richly rewarding experience. The free spins feature can be retriggered.

Finally, when the All I Ask of You Bonus is unlocked, 10 free spins will be awarded along with a wild feature, called Dancing Wilds™. Both Raoul and Christine feature as wilds and move randomly between each spin to the time of their duet. When landing in specific spaces, they can transform into standard wilds, a single wild reel, adjacent wild reels, a 2x2 wild block, and a 3x multiplier.

Games Publisher of Microgaming, shared his excitement for the release of the new Phantom of the Opera slot: "The Phantom of the Opera is a mesmeric game, combining a new game mechanic with visually stunning artwork and a musical score that is legendary. There has been much hype about the slot since we unveiled our plans at ICE in February, and I'm delighted that the stage is now set and it is ready to launch with our vast operator base. Our incredibly talented game studio have truly realised the brand. Working with The Really Useful Group to bring this game to market has been a pleasure; we are excited to see how the game performs in the coming months."

Enter the phantoms domain at any of Microgaming casinos available, including the acclaimed Jackpot City Casino. New registrants will receive a welcome bonus to explore the games, which now include the new Phantom of the Opera slot.