The Phantom of the Opera Free Play Slot

The Phantom of the Opera
Enjoyed playing this game?
Rate it → 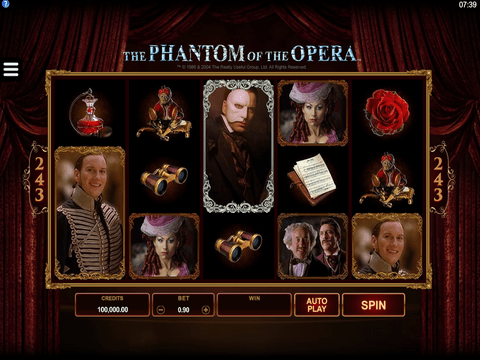 The Phantom of the Opera

The Phantom of the Opera Game Review

Music junkies and opera aficionados will definitely enjoy this new slot machine game developed by Microgaming software. In the Phantom of the Opera slot machine, which was relaunched as the Haunted Opera, you will get a chance to relive moments and dramas of this best-selling novel and popular movie adaptation on the reels with distinct features and characters from the original title. You may now try this free play slot on this site with no download required.

Phantom of the Opera Slot Review

This game has five reels and 20 unique paylines available for its online and mobile players. You may place wagers for as low as 0.01 up to 5 credits per active payline. The maximum allowable stake amounts to 20 coins - equivalent to almost $100 - which may be placed on all lines per spin.

Just like any other slots, your main goal in the Phantom of the Opera slot machine is to land winning combinations on the screen to receive its equivalent payouts. The lowest paying combinations belong to the card letters or numbers which pay you up to 400 credits. Land three or more mirror or red rose symbols on a winning line and it will reward you at most 800 coins. Meanwhile, the icon of Christine rewards you with 1,000 maximum credits.

The highest paying combination belongs to the music sheets which grants you 5,000 worth of credits for five of its symbol in a line.

The wild symbol is represented by the mask. Aside from replacing any character on the reels, the masks also pay you the maximum payout worth 10,000 credits for five in a line. It also doubles your winnings if it successfully substituted for a winning line.

On the other hand, the sealed envelope acts as the game's scatter symbol. The scatter rewards you with an instant 100X multiplier when you land five its characters on the screen.

It also triggers the bonus round - with five free spins - which triples the amount of your winnings per successful spin. Make sure to land the scatter on the first reel, while the wild symbol lands on any part of the fifth reel to activate this bonus feature.

During these free games, the Phantom himself could appear on the screen to reward you with 1 to 3 more spins. You can't retrigger this special feature, but you can stack up more spins with the wilds continuously appearing on the reels. This bonus round could pay you as much as 30,000 credits with the three times multiplier.

If you can't get over this featured slot game, then you can try Rival's Opera Night slot machine for another experience at the opera. Opera Night is a five reel slot machine which has 20 active lines for its players. You can place wagers for as low as 1 credit up to a maximum stake worth 50 coins which could win you as much as 5,000 credits on a winning spin.

You can now meet the Phantom and explore more of his opera in this demo version available at Jackpot City Casino with no registration requirement. Players from Canada are also welcomed to try this game with exclusive free spin and no deposit bonuses for real money wagers.