CMA Give the Ok for Ladbrokes Gala Coral Merger 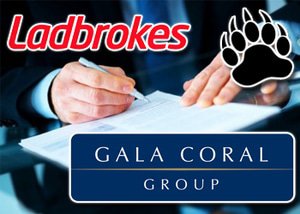 The Ladbrokes Gala Coral merger has finally been completed as the Competition and Markets Authority (CMA) give the go ahead.

The merger between Ladbrokes and Gala Coral has finally been completed. The confirmation came after the final approval was given by the UK Competition and Markets Authority (CMA). The newly combined company will be called the Ladbrokes Coral Group and will have an estimated worth of approximately $2.8 billion putting it in a great position in the top ten largest online gambling companies for 2016.

The approval took quite some time to get and the CMA requested that both companies sell between 350 and 400 of their retail shops in a bid to lower the competition concerns that they had. Gala Coral sold 360 shops last week to Betfred. The completed merger will include several of Gala Coral's businesses such as Eurobet retail, its online bookmaker operations, and Coral Retail.

Ladbrokes were quick to publish a statement immediately after approval was received in which they stated, "in relation to the readmission of the combined group to the premium listing segment of the Financial Conduct Authority's Official List and to trading on the London Stock Exchange."

The new Chairman for the Ladbrokes Coral Group, John Kelly also released a statement saying, "In uniting these two businesses we are bringing together some of the best known and admired brands in betting and gaming. We believe that no other gambling business has such a strong heritage, with brands that enjoy such broad appeal and a presence that is woven into the fabric of the UK culture as well as overseas regulated markets."

The outcome of this merger has taken 18 months of negotiations but now that they have been completed a merger that cost $2.81 billion, we have the biggest retail bookmaker in the UK with some 3,500 shops.

The newly created Ladbrokes Coral Group has been filed with the London Stock Exchange but they will continue to operate as two distinct brands while maintaining their Gibraltar operational and customer service offices.

John Kelly, Chairman of the new group said, "Together we have the opportunity to grow the business building on our scale, the digital opportunity we have in our markets, our international presence, and through the delivery of significant synergy savings. We have a strong management team in place and are already well placed to set about the creation of a new business with a clear focus on delivering the opportunities the completion of the Ladbrokes Gala Coral merger offers us."

Carl Leaver, the past Chief Executive Office for Nottingham-based Gala Coral Group said, "The team at Gala Coral has worked tirelessly to turn around the fortunes of the company over the last few years and the business has been transformed into one of the best performing in the sector. Our merger with Ladbrokes brings new and exciting opportunities for both companies under the leadership of Jim Mullen, we are now in a position to make our ambition of creating the UK's leading betting and gaming business a reality."

Jim Mullen said, "This is a historic day for the company and one that marks the start of an exciting journey for the business. Both Ladbrokes and Gala Coral have demonstrated their abilities to compete hard and win in increasingly competitive markets. This will be the attitude of the management team going forward, to compete hard and set about quickly establishing the business while delivering the synergies as quickly as possible. We have a strong management team in place and have worked hard to secure the best talent from across both businesses and externally. We are all excited by the opportunities that lie ahead."