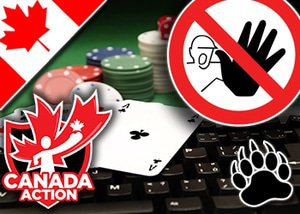 It looks like there could be some serious opposition to Quebec's attempts to force ISP providers to block all online gambling sites not regulated in the province as a Canadian Action Group begins their challenge.

A Canadian Action group is set to challenge Quebec's proposed IPS block. The new law that was put into effect by the Quebec Provincial government is causing a lot of controversy and the Public Interest Advocacy Centre group has made the decision to challenge the decision. They have filed a complaint with the Canadian Radio Television and Telecommunications Commission (CRTC).

This Canadian action group is claiming that the new laws are breaching Canada's national control of the internet. This breach comes from the censorship of the internet with conflicts via the federal telecommunications authority.

Law 74 is being described as an overtly commercial attempt to limit market competition in Quebec and is based solely on Quebec online gambling interests. Since being passed, this law has caused a media frenzy and it is set to cause even more complaints as widespread condemnation increases.

The finance minister has tried to dismiss the move against the law and has stated that this law is an issues for public health.

The Canadian action group wants the law to be declared unlawful and unconstitutional. They want the ISP blocking to be removed. The Public Interest Advocacy Centre (PIAC) is a non-profit registered organization that involves themselves with consumer protection and long term membership supporting individuals and telecomm companies.

Bill 74 is a gambling law that was passed in May this year that gives Loto-Quebec, the provincial gambling authority, the power to order internet service providers (ISPs) to block its online competitors. Bill 74 contains language compelling the province's ISPs to block domains of online gambling sites not run by Loto-Quebec or any privately operated sites that Loto-Quebec chooses to license, such as Amaya Gaming's PokerStars brand. Legal gambling in Canada is regulated by the different provincial governments.

PIAC's application to the watchdog alleges that Bill 74 encroaches on the federal government's jurisdiction over telecommunications and is inconsistent with the past CRTC decisions on website blocking under the Telecommunications Act.

Geoffrey White, a lawyer for PIAC said, "There is a risk that if Quebec is found legally competent to order ISPs to block certain content, other content may be added to the list of what's acceptable and what isn't, and other provinces could follow suit. Given how vital the Internet is to preserving and promoting human rights, including free speech, one province's foray into ISP regulation could result in the steepest of slippery slopes."

In their argument, PIAC states that Bill 74 directly conflicts with section 36 of the Telecommunications Act, "frustrates" the policy objectives in section 7 of the Act, presents a compliance challenge for Quebec ISPs, and threatens constitutionally-protected free speech.

They are asking the CRTC to declare Bill 74 unconstitutional and to deny any application made by an ISP looking to observe Bill 74's demands. They also want the CRTC to issue an interim injunction preventing ISPs from blocking online gambling sites, or from taking any steps precedent to blocking such sites.

Quebec has yet to issue IP-blocking orders to ISPs and it could be up to 18 months before an official list of offending sites is compiled. PIAC are concerned that ISPs are wireless service providers will be forced to starting taking action to prepare for this and will be putting systems in place and hiring and training staff for this purpose. These preparations will affect consumers because of the associated costs, which PIAC says will be passed onto consumers through rate increases or reductions in service and/or network performance.

PIAC has also dismissed Quebec's claim that Bill 74 is intended to protect the health and well-being of Quebecers. They pointed out that Quebec is not seeking a ban on online gambling but to corral it into a regulatory scheme and in fact into an internet portal from which the provincial government can derive fees.

PIAC have also stated that Quebec's plans are "practically unworkable". Consumers could use different DNS servers than their own ISP or use virtual private networks (VPNs). They also pointed out that Quebec has no regulatory or policy tools in the area of telecommunications and would therefore need the CRTC to enforce the law. They have argued and said that the CRTC would get fed up very quickly of having to deal with the influx of queries, applications, and calls for enforcement that would follow.

PIAC concluded their argument with this:

"There is no overwhelming policy goal that would justify the drastic step of approving blocking of certain content from the Internet, whether to enable Bill 74 or as a moral or public policy goal. The Commission has no evidence of such a need and PIAC submits that such evidence would have to be of an evil so overwhelming that it trumped the rights of all users of the Internet for otherwise lawful purposes and expression - an extremely high, most likely constitutionally impossible, barrier."