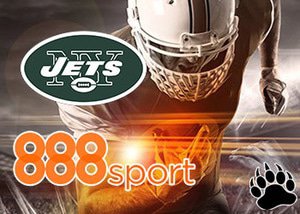 888.com has signed a partnership deal with the NFL's New York Jets, making them the first online betting company to ink a deal with an NFL team.

A week after reports of the sponsorship were announced on the airwaves, global online gaming giant 888.com, operating internet-based sports betting, casino, and poker in New Jersey, officially announced an online sponsorship agreement with the New York Jets of the NFL.

The New York Jets, who previously formed a gambling-related partnership with FanDuel, a nationwide DFS operator and New Jersey bookmaker, are further exhibiting clear support for regulated and legal gambling. Towards the end of October, the National Football League franchise also signed a multi-year contract with MGM, making them the first official gaming partner for the New York Jets. According to 888.com, the online partnership agreement with the New York Jets is the very first of its kind with an NFL franchise.

What 888 Will Receive from the New York Jets

Thanks to the brand-new partnership, the 888.com brand name will be widely advertised around the MetLife Stadium which could potentially encourage more fans to place bets on the NFL during games.

According to several reports, the sponsorship deal is only valid for the ongoing NFL season and therefore it's quite clear that both parties are essentially giving this a trial run where they could potentially re-up at a later stage. They will also be evaluating the league's reaction to the new sponsorship.

The online gambling giant is permitted to use the New York Jets brand name in its own marketing materials. In addition, 888.com will receive adverts on New York Jets' digital platforms and during game day radio coverage. Lastly, all premium customers at 888.com will gain access to purchase tickets to matches at the MetLife Stadium in New Jersey.

The Head of the Group Commercial Development at 888.com, Yaniv Sherman, called the New York Jets an iconic brand. "The sponsorship agreement is a significant moment for 888.com as well as the iGaming industry. This makes it the very first sponsorship deal between a global online operator and an NFL team," he added. 888.com hopes that the partnership with the New York Jets will strengthen its already popular brand as it attempts to be regulated in more states across America.

What the New York Jets Will Receive From The Deal

Although it wasn't disclosed how much the New York Jets will receive from the partnership deal with 888.com in terms of money, we can assume that the agreement will be quite lucrative for the NFL franchise.

There's no denying that the New York Jets have a much stronger brand awareness across the United States than 888.com. However, 888.com will undoubtedly receive a serious bump in this regard. On the New York Jets' website during their game against the Minnesota Vikings on 21 October 2018, the team informed its loyal readers of the 'gameplay guide' to go ahead and download the 888.com mobile app where they can stand a chance to win autographed New York Jets mechanise along with a bunch of other fantastic prizes.

The online sportsbook of 888.com will assist in growing fan engagement with the New York Jets. As per the American Gaming Association, the National Football League could potentially reap a staggering $2.3 billion in additional revenue every year due to online sports betting. The potential revenue doesn't include the camouflaged royalty.