Yggdrasil Gaming is working on a Nitro Circus slot 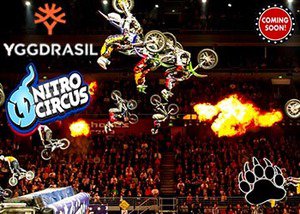 The Malta-based casino games developer Yggdrasil Gaming has built a stellar reputation as a visionary creator of casino content, including popular slots such as Valley of the Gods, Vikings Go Berzerk, Jokerizer, and Easter Island.

To provide players with another mind-blowing experience, the creative team at Yggdrasil Gaming is proud to announce the development of their first branded video slot and it's going to be nothing short of spectacular.

The launch of the new Nitro Circus slot perfectly coincides with the Nitro Circus You Got This Tour which is set to take place in Europe towards the end of the year as the largest sports entertainment brand will visit six different European countries between November 20 and December 9.

The countdown to the release of the new Nitro Circus slot has already started and can be viewed at the nitrocircusslot.com website. Eager slot fans can also view a special introductory message and trailer from co-founder, stunt daredevil, motorsports competitor, and legendary sports athlete, Travis Pastrana.

What Is Nitro Circus

Nitro Circus is essentially the only action sports entertainment brand delivering the best and biggest stunts and entertainment for both risk-taking wannabes and daredevils in the spirit of fun and friendship. From humble beginnings with Travis Pastrana, Gregg Godfrey, and Jeremy Rawle making DVDs in 2003 from a garage in Utah, Nitro Circus has managed to explode in popularity across the globe, leaving a lasting impression in the minds of young people around the world.

So far, there are no details on the new Nitro Circus slot other than the release date but there's no doubt that the slot will present an unforgettable experience. We're expecting sweating palms, adrenaline rushes, and stunning visuals along with action-packed bonus features for huge wins.

Come November all casinos powered by Yggdrasil Gaming will offer the Nitro Circus slot to adrenalin junkies across the world. In the meantime, players can enjoy Yggdrasil games at Tropezia Palace Casino, where first-time customers will also receive a 100% match up to $100 on their first deposit. Ts and Cs apply.