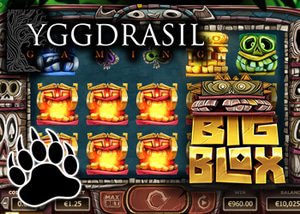 Yggdrasil Gaming has again released another new slot to their portfolio of video slots. It is the first slot from the company that offers a big block style game and is one of pride for Yggdrasil. Big Blox is available for play on your P.C, it is further offered and developed for play under Yggdrasil's iSENSE2.0, which is their mobile software. This is a great benefit as it includes many tools to allow casinos offer bonuses and free spins to name a few.

Its official release was on the 24th of August and is based on a Mayan theme and featured bright, vivid images of the dense jungle that was home to the Mayan tribes. Surrounding it are symbols and epigraphs that were an integral part of their identity and the advanced culture they created. Its design is a 243 way to win, 5 reel creation that based its game symbols with the same mindset in order to give it credibility as well as make it pleasurable to engage in as you try to achieve its largest wins. There are eight different symbols and what is nice about those is that each is unique as Yggdrasil has chosen to not include the usual filler symbol often seen in today's slots.

The main feature that this slot includes is based on its namesake, big blox. This will see large blocks that can land with each spin. This can be in a 2x2 format or 5x3 and has the ability to cover the entire three middle reels to allow for big wins. As this game includes a wild symbol, it is easy to see how this can translate into some exciting times ahead with max wins being 3,888 time your bet. Those who are brave enough to wager the maximum of $100 per spin could see a win surpassing $480,000!

The Yggdrasil Gaming casino software has created a number of high profile slots today such as Cazino Zeppelin, Nirvana, Fruitoids, Incinerator and Golden Fish Tank. What the future will bring from this company will only positive as they continue their strides forward and gain market share. The games they release tend to come at a slower level than that of their competition, but when they do release a game, it is generally flawless and well received by the playing public, and that it itself says a lot about the quality of the games produced.