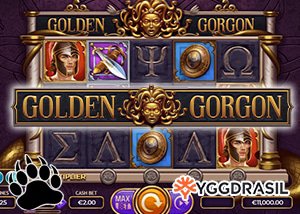 Players at Mr Green Casino will get the opportunity to meet the three Gorgon sisters from Greek mythology, including Medusa, Euryale, and Stheno. All three of the sisters had magical powers with snakes for hair and could turn anyone that looked at them into stone. With the latest video slot from Yggdrasil Gaming, you can use their magical powers and their deadly gazes to your advantage by unlocking lucrative rewards and instant cash prizes. The slot is called Golden Gorgon and it's available on both desktop and mobile devices, including iOS and Android.

The new Golden Gorgon video slot from Yggdrasil Gaming casino software comes with a comic book feel along with a captivating soundtrack presented on five reels and three rows. All your winning combinations will be decided by 25 fixed paylines. You'll also be able to take advantage of a handful of bonus features infused into the reels, including a Golden Gaze feature and a Multiplier feature along with a top payout of up to 2,500 times your bet size.

One of the first things you'll notice in the new Golden Gorgon slot is that there are no wild symbols or scatter symbols in the game. Most online slots these days are jam-packed with complicated bonus features and Yggdrasil Gaming decided to make their new slot as simplistic as possible. Therefore, you'll only benefit from two bonus features while playing the slot at Mr Green Casino. This is ideal for newcomers and beginners who want to play a slot without having to worry about unnecessary special icons and overcomplicated bonus features.

The first bonus feature is the Golden Gaze feature. You simply need to display 3, 4, or 5 matching symbols to generate a winning combination from left to right on any payline. Every time you do this, you'll unlock the Golden Gaze feature. When a winning combination is triggered, you'll notice that the gorgon overlooking the reels will turn all winning symbols into gold. These winning symbols will then be frozen in place while the remaining symbols will receive a free re-spin. Should you land a new symbol that improves your current combination, it will also be turned into gold and will be frozen in place. Thereafter, another re-spin will follow. This will continue until until you can't display a matching symbol that will improve your combination.

To compliment the theme and atmosphere portrayed in the game, Yggdrasil Gaming added various slot symbols to keep you playing for hours on end. The Greek warrior is the most prized symbol in the game, providing a top prize worth 20 times your stake when you land five Greek warriors on a single payline. You will also be able to boost your bankroll by up to 6 times your stake when you display five swords on a winning payline.

you'll also find a golden shield on the reels, increasing your balance by up to 3 times your stake when you land five shields on a single payline. The remaining symbols have all been taken from the Greek alphabet to keep the slot as authentic as possible. This includes the Alpha symbol, paying up to 2 times your stake along with the Sigma symbol, paying up to 2 times your bet. You'll also find the Psi symbol and the Omega symbol, boosting your balance by 1 time your stake when you land 5 matching symbols on a single payline.

The betting possibilities in the new Golden Gorgon slot will cater to beginners, low rollers, and high rollers alike at Mr Green Casino. The game features 22 coin values on the control panel for added flexibility and freedom when it comes to selecting your preferred bet amount. You'll need to bet a minimum of $0.25 to set the reels in motion, while high rollers can look forward to a maximum bet amount of $400.00.

As with most Yggdrasil Gaming slot, you'll also benefit from an assortment of innovative features to make your gaming sessions as comfortable as possible. This includes several audio settings, such as ambience sound, sound effects, and a volume bar. You'll also find options for spin speed, the ability to use spacebar as the spin button, and an autoplay feature. There's even a max bet button located next to the spin button to bet the maximum of $400.00 without spending too much time on the control panel.

Where to Play the new Golden Gorgon Slot

Yggdrasil Gaming's new Golden Gorgon slot comes with a 12.7% hit frequency along with a 96.00% return to player ratio. This means that the slot's volatility is very high and winning opportunities are few and far between. The new slot is available at several Yggdrasil Gaming casinos. However, we recommend that you play the new Golden Gorgon slot at Mr Green Casino as newcomers are greeted by a 100% match bonus up to $100 along with 20 free spins on the Book of Dead slot.