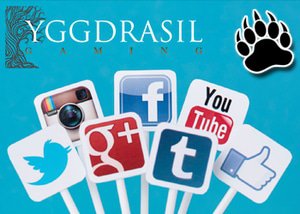 Get ready to brag about your wins with the new social replay feature that Yggdrasil Gaming has added to a number of their slots games.

On Thursday Yggdrasil Gaming, a Swedish games developer, released a statement revealing a revolutionary new social tool that will allow players to replay their winning spins and share them on social media channels. This could be a real game changer for the online slots industry.

This new tool is known as BRAG and is part of the player-facing subsection of Yggdrasil's BOOST collection of promotional tools. According to Yggdrasil, BRAG can help improve operator's organic social media volume by encouraging players to share replays of winning spins on Facebook and Twitter.

This new replay and share feature is the first of its kind in the online gaming industry and it is causing quite a stir. Players will be able to re-watch and share their winning spins on Yggdrasil's tournament leader board initially before it rolls out fully.

According to Fredrik Elmqvist, Yggdrasil Gaming's CEO, "Future updates will give players the opportunity to share any big win or any spin from their last 10 game rounds. Early testing has shown the tool to be hugely popular with players, increasing engagement and improving the overall experience."

He went on to say that he believes with this new revolutionary launch Yggdrasil Gaming will offer the potential to drive revenues for operators while creating a more engaging experience for casino players. Yggdrasil Gaming also announced a $25,000 network campaign tournament on their popular slots game Golden Fish Tank in conjunction with the launch of the BRAG social replay feature.

Elmqvvist also said, "there is nothing wrong with a bit of bragging, and with Yggdrasil's new BRAG tool we are giving players the opportunity to share their success with the world." He also went on to say that once again Yggdrasil casino software has launched an industry-first innovation which has the potential to drive revenues and there will be plenty more to come from BRAG too, with new features to be rolled out in the coming months.

Yggdrasil Gaming was recently honoured as the winner of "Slot Provider of the Year" at the 2016 EGR B2B Awards. This is just one of the many accolades this software developer has received. Other awards have included Gaming Software Supplier of the Year at the 2016 International Gaming Awards, and Software Rising Star at the 2015 ERG B2B Awards. We can expect to see a great deal more from this software developer in the coming years too.