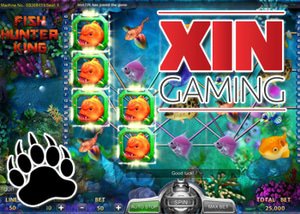 Fish Hunter King is a brand new five reel, three row, 50 payline slot that players in Asia will already be familiar with. Its features and graphics are based on the popular Chinese arcade game called Fish Hunter.

Chief Executive of XIN Gaming, Mathias Larsson, said the game and its theme will help to further strengthen the company's presence in the Asian market. He went on to say that Fish Hunter is very popular in arcade halls across China and by releasing this new XIN Gaming slot they hope to give fans a different way to enjoy this all-time favorite title.

Fish Hunter King comes swiftly on the heels of Euro Football Champ and when asked about this, Larsson said that it proves that they are able to release several games in a short period of time. He also stated that he thinks that this new slots game also proves that XIN Gaming can produce very different games as well as expanding on what is expected from slots games.

The release of Fish Hunter King also shows that the online casino software developer has an in-depth knowledge in what the Asian market wants. Fish Hunter King is a fun game and one that is sure to appeal to Asian players no matter where they are located in the world.

Fish Hunter King is a five reel, 50 payline video slot that is packed with extra features that boost players winning potential. It provides high quality entertainment and the graphics and game layout have been based on the original arcade title, so this new online slots games will help XIN Gaming casinos to establish themselves even more in the Asian market. This XIN Gaming slot has been developed using HTML5 technology so players can enjoy all the action across a multitude of devices including smartphones and tablets such as the iPhone and iPad. It is also available for Mac and PC and can be played with no download in your browser.

All these titles are available through the XIN Gaming Remote Gaming Server and they have signed some great software providers too including Endorphina, Big Wave Gaming, and Inteplay.