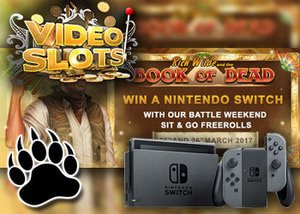 Play Dead but win BIG in Video Slots Casino's Rich Wild and the Book Of Dead video slots promotion, taking place on the 25th and 26th of March 2017.

The casino is back with an interesting weekend of "Battle of Slots" while rewards are bigger than ever and offer participants the opportunity to spin their way to winning a Nintendo Switch.

Battle Of The Slots Details

Most importantly is to mark these dates in your diary now since the Rich Wild and the Book Of Dead sit & go freerolls starts at 00:00 GMT on Saturday the 25th of March and end on Sunday the 26th of March 2017 at 23:59 GMT.

The battle type is Sit & Go Freerolls. The number of players per battle is 10, bet level is set at $0.01 across 30 spins and the price structure is as follows: The winner are awarded 6 free spins, runner up with 5 free spins, and 4 free spins is awarded to the player in 3rd place plus all free spins on offer are wager free.

At the end of the battle, the three participants with the highest win on a single spin will walk away with a Nintendo Switch or its equivalent in cash.

How To Qualify for the Slots Promo

Participants can join the battle of the slots and stand the chance to win a Nintendo Switch if they have deposited €20 or more or wagered at least €200 in the pre-launch Video SLots promotional period starting 6th of March 00:00 GMT ending on the 24th of March 2017 at 23:59 GMT and all battles will be played in EUR.

Don't Miss How You Can Win A Nintendo Switch

The Book of Dead, the battle of slots weekend starts as soon as 10 participants have registered. Once one tournament is full, another pop's up immediately, and players can participate in as many battles as they wish, simultaneously during the promotional period.

The Nintendo Switch delivers remarkable gameplay and provides multi-player or single thrills at home and within the first week of its launch over 1.5 million Switch consoles were sold!

The previous Battle of Slots promo was enjoyed by 5,685 players who played 1.7 million spins within a 48-hour period and Video Slots Casino handed out a total of 85,275 free spins in this January promotion when the top prize was an iPhone 7.