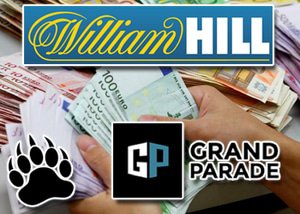 British bookmaker William Hill has confirmed the purchase of software and digital gaming developer Grand Parade Ltd for $18 million in cash and stock.

In a statement issued by William Hill, they said they would issue 495,048 new shares at 10 pence each to Grand Parade as a part of the consideration. They did not disclose the cash portion of this acquisition deal.

According to Philip Bowcock, William Hill's interim Chief Executive Officer, "Bringing the Grand Parade team into William Hill will rapidly ramp up the scale of our development team by backfilling existing resource gaps and also enhance our creative capabilities."

He also went on to say, "this enables us to capitalize on the potential of our Trafalgar front-end platform by accelerating our product development and also to support the work with OpenBet to build our new back-end platform." OpenBet is the betting technology firm that was recently acquired by NYX Gaming Group with an £80 million assistance from William Hill.

William Hill are due to issue their H1 2016 results this week. We already know that the company's online operations have struggled over the past year and this has led to profit shortfall warnings which also helped precipitate the abrupt exit last month of CEO James Henderson.

Grand Parade Ltd, established in 2007, is a provider of software for betting and digital gaming companies. They create apps, websites, and e-commerce platforms. This online casino software provider has around 200 staff based in offices in London and Krakow. They also supply technology for many of William Hill's rivals including Ladbrokes, Coral, and Betfair.

Grand Parade helped with the launch of the Betfair Predicts election betting app, the new Football pools app, Coral Bet's in-play product, Ladbrokes' news sites, and much more. This acquisition from William Hill comes just weeks after William Hill responded rather coolly to a proposed joint takeover bid from 888 Holdings and Rank Group. Could this be payback?

According to Grand Parade founder and CEO Andy Clerkson the acquisition reflects "the high regards William Hill have placed on the creative and technical expertise we have provided our customers and will continue to do so in the future."

As a result of this acquisition, Grand Parade's non-executive chairman John O'Reilly, has left the company.