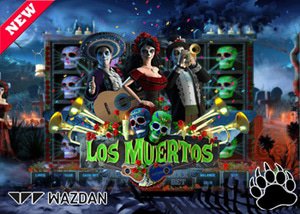 Enjoy one of the most famous festivals in Mexico by playing the latest slot release from Wazdan filled with huge colossal symbols.

Wazdan has managed to capture the spirit surrounding the Mexican Day of the Dead, more commonly known as Día de Los Muertos, which is considered one of the most captivating holidays in the world. With its joyful parades, strange costumes, colourful decorations, and unique atmosphere, this Mexican tradition provides the perfect theme for a modern video slot, flawlessly reflecting the climate of this phenomenal cultural event.

With the reels portrayed in front of a gloomy cemetery at night, the new Los Muertos slot from Wazdan online casino software will make your heart beat faster with every spin you initiate. The slot comes equipped with 5 reels, 4 rows, and 40 paylines along with an arsenal of fascinating bonus features, including Multipliers, Free Spins, Giant Wild symbols, Colossal Symbols, and a graveyard-inspired gamble feature along with a top paying jackpot prize worth 1,650 coins.

The male character with a painted face, wearing a top hat, will represent the Giant Wild symbol on the reel set, standing in for all symbols to potentially generate a winning combination, except for the Giant Bonus symbol. The Giant Wild symbol is essentially a 3x3 symbol that can appear on the middle 3 reels and will only be available during the free spin feature.

The new Los Muertos slot features 40 non-adjustable paylines which cannot be adjusted while playing this slot. However, there are 16 different coin values available, ranging from $0.01 up to $2.50. This will give players a minimum bet amount of $0.40 per spin along with a maximum bet amount of $100.

The slot also impresses with a decent selection of regular symbols to complement the overall look and feel of the game as well as the cultural event. The highest paying symbol in the base game is the yellow skull, paying a hefty 1,650 coins when 5 are triggered on a payline. Players will also find turquoise skulls, purple skulls, and green skulls along with red Aces, purple Kings, pink Queens, orange Jacks, and yellow Tens.

Where to Play Los Muertos Slot

The new Los Muertos slot boasts with a payout ratio of 96% and comes with 3 volatility levels for added convenience. The slot is available at all Wazdan casinos from October 2018 and features incredible graphics with incredible sound effects. We recommend that you play the Los Muertos slot at Energy Casino where new players can look forward to a 100% match bonus up to $200 on their first deposit plus plenty of other promos.