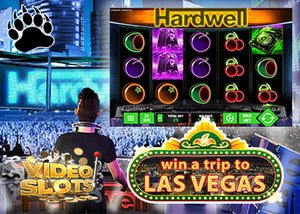 Music fans from around the world are sure to be familiar with the Dutch-born legend who has been voted the world's best DJ on two occasions. The dancefloor ruler has put his tunes and talents to good use by collaborating with StakeLogic to develop a brand-new slot called Hardwell.

Videoslots Casino invites you to join an exclusive tournament from 2 - 29 April, and you could be packing your bags and jetting off with a guest to Las Vegas to see Hardwell perform live at the Hakkasan Club.

Participating in the promotion is easy. You simply need to play the new Hardwell slot at Videoslots Casino. Each spin will earn you points on a leaderboard from 2 - 29 April. The player that earns the most points will win the Las Vegas package, including two return flights to Las Vegas, 5-day accommodation for two, €1,500 spending money, and two passes to see Hardwell live at the Hakkasan Club on August 31st.

But that's not all. During the Hardwell slot tournament, players can also uncover secret trophies and receive up to 10 rewards for every 100 spins completed on the Hardwell slot. These rewards will include Battle tickets, Casino Race Multipliers, and Weekend Booster Multipliers. Also, the first 50 spins on the Hardwell slot will provide a guaranteed ticket into a draw for the chance to win a share of €1,000. The prize money will be divided among the top 10 players, ranging from €500 for 1st place to €25 for 10th place.

The new Hardwell slot offers a traditional setup with 5 reels and 25 fixed paylines. Although the game comes with fixed paylines, players can still choose the number of coins per line and the value of each coin, making the minimum bet a mere €0.25 with a maximum bet of €50 on a slot with an RTP of 96.04%.

The slot also houses a variety of bonus features, including the Lock and Spin feature, allowing up to 15 symbols to transform into the same symbol and a free spin feature that incorporates various modifiers, such as expanding or extra wilds, wins both ways, and multipliers up to 10 times your total bet. There are also wild symbols and scatter symbols available in the base game along with a top jackpot prize worth 500 coins.

For more slots, visit our free slots section from multiple software providers can be played for free.

The tournament will be based on who achieves the most rounds in the game. You will receive a point for every spin, so the more you spin, the more points you'll earn, placing you higher on the leaderboard. The leaderboard will be updated daily, displaying the top 5 players. The promotion is only available on the Hardwell slot from GreenTube.

The player who ranks first on the leaderboard will win the grand prize. In the event of a tie, the winner will be selected randomly. The grand prize can't be exchanged for cash. You will need to play a minimum of 50 spins to be eligible for the draw. All winners will be announced on 4 May 2018 at Videoslots Casino.