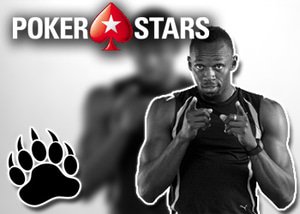 The record-breaking sprinter is an eight-time Olympic gold medal winner and now teams up with PokerStars assisting the company to make poker pleasurable and draw a new audience along with the Hollywood actor Kevin Hart who joined the enterprise recently and committed to make poker fun again for players and masses around the world.

Bolt stated the following: "PokerStars is a winner and I'm happy to join Kevin in helping to bring poker and PokerStars to the masses. It's a challenging game that's fun, social and competitive so I'm pleased to be able to introduce it to my fans and to people around the world."

The Jamaican superstar will be representing and promoting PokerStars in countless advertising campaigns with live appearances geared towards enticing a new audience to poker. Given the popularity of Bolt, he will surely add value and speed to poker in partnership with Pokerstars!

PokerStars is a renowned online establishment that conducts the world's most admired online poker sites, serving the international poker population. Since commencement in 2001, this online entity has become the first choice of players all over the globe, with more daily tournaments than anywhere else. In addition, it vaunts with the best online security and more than 165 billion hands have been dealt on its site, which is more than any other site in the online realm.

PokerStars is the world's most licensed online gaming brand, holding licenses or related operating approvals in 17 jurisdictions. PokerStars.com and PokerStars.eu operate globally under licenses from the Isle of Man and Malta governments, respectively.

As a recommended online betting review site we encourage you to check out PokerStars , the number one choice for real Canadian poker punters. All new players signing up at Poker Stars can select from two compelling PokerStars bonuses. The first is a conventional percentage match offer, where your initial deposit is matched dollar for dollar, up to C$600. Alternatively, although it's not a no deposit bonus, there is a free play giveaway valued at C$20 that is triggered when opening an account and making a cash commitment. Both coupon codes are complemented by one free ticket into a multi-tourney event offering a combined prize pool of C$100,000. In order to activate the free cash or free play offer, simply enter the appropriate code onsite and enjoy a head start with your free Canadian dollars! Be sure to keep an eye on the promotions page of the website so you don't miss out.