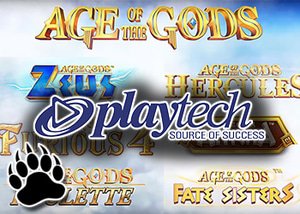 Playtech one of the top software providers in the online gambling industry has just released two additional games in the Playtech Age of Gods slots series.

The release of these new slots games comes alongside their largest every casino promotion that will run throughout the Euro 2016 championship.

The two new slots games are Age of Gods and Age of Gods Furious 4. These are the second and third titles to be released in this series of progressive jackpot network titles. Age of Gods King of Olympus was the first game to be launched with great success and there are four more Playtech slots titles to come later in the year.

Age of Gods Furious 4 is an action packed five reel, 20 payline slot machine that features four different Gods. Players will find Prometheus, Apollo, Pandora, and Atlas, each of which will have their own specific bonuses. Players have a shot at winning the progressive jackpots by unlocking these character specific bonuses.

Each God in this Playtech Age of Gods Slots game also has its own feature including the power to unleash increasing win multipliers, stacked high win symbols, expanding wilds, and more. Even better, all the action is available to play on any device including iPhone, iPad, and Android smartphones. All the Age of Gods slots have been designed to appeal to a wide audience and they come with large progressive jackpots too. Players have the chance to win one of four linked jackpots on any spin.

Playtech's chief operating officer Shimon Akad has this to say, "Our casino unit has developed a series of incredible, high-quality games that will add yet another dimension to our already unique suite of 600 best-performing titles."

He also went on to say, "the Gods have most certainly arrived but there are many more to come. Our licensees and their players can expect a whole stream of Age of Gods content to be launched across the rest of this year."

Alongside Playtech Age of Gods slots releases, players can also enjoy this slots providers largest every casino promotion. This is a $250,000 giveaway that will run across the entire Playtech network for the 21 days of the Euro 2016 Championships.

The $250,000 cash giveaway consists of three draws including one that is worth a massive $100,000 and two others worth $75,000 each. Headlines prizes will top $5,000 with hundreds of small cash prizes too in order to create as many winners as possible throughout this event.

In order to take part, all you have to do is play the Playtech Age of Gods slots. For every $10 wagered players will receive one entry ticket. Each draw will also contain one double ticket game where players will have the chance to double their chances of winning by receiving two prize draw entries for every $10 they wager.

Akad said, "Our Age of Gods cash giveaway is a fantastic opportunity for our casino network licensees to offer their players something truly unique and exciting during the busiest period of 2016. It also marks our biggest ever casino network promotion to date, and one that we are delighted to launch in line with our mind-blowing Age of Gods slots titles."