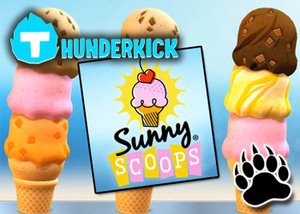 Thunderkick is a new modern software developer located in Stockholm that was founded by a team of experts with years of game development experience. With all gaming developing done in-house the company surprises regularly with unique ideas showcasing the passion of the team, achieving exceptional quality while every single game is created to brilliantly amuse.

Sunny Scoops launched at the end of August 2014 and invited players to the beach where enjoyable ice cream scoops are displayed in a 3 x3 slot that featured no less than seven yummy bonuses and each free spin win increases its multiplier.

Two years later and mobile users can now look forward to enjoying Sunset Delight, a revamped and retitled video slot done in true Thunderkick software style. The great news is that the delicious ever-increasing multiplier future is still very much part of this high volatility video slot, while scatters and wilds empowers players to build and complete successful combinations.

In Sunset Delight video slot your aim is to collect scatters while progressing in the bonus round since each scatter grants one additional free spin and one step on the bet multiplier. Symbols continuously added creates a delicious ice cream tower and the screen follows the upwards success and progress, once all free spins are used the game descend along the tower to collect all winnings and the total wins are multiplied with up to 100x.<.p>

The wild symbol substitutes for all apart from the scatter and needs to combine with at least one more symbols to form a winning payline, while three wilds offer a payout of 150 coins.

Scatters are overlaying symbols that have the ability to appear anywhere and once three is visible the bonus game is activated, the step or spin symbol advances one step in the stake multiplier ladder to grant an additional free spin.

Recently released Thunderkick slots include Babushkas a beautifully colourful game inspired by Russian nestling dolls, Zoom a video slot that offers an exciting combination of simplicity mixed with classic to provide a powerful winning twist and The Rift video slot surprising with a mystery that lies hidden in a murky back alley in which saving magical artifacts rewards remarkably.

Thunderkick Slot fans can now look forward to Spectra a brand new video slot set to be released on the 7th of September 2016.