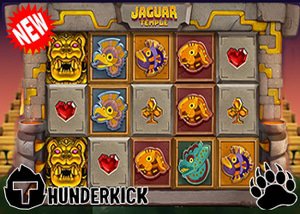 Travel to the South American rainforest and get handsomely rewarded by one of the most significant deities in the Inca culture while playing the latest slot from Thunderkick.

Jaguars are considered one of the most important idols in the Inca culture as they protected the Inca Empire from evil spirits and were a symbol of strength. Thunderkick based their latest slot creation around this theme and developed Jaguar Temple, a sensational new slot with crisp graphics, beautiful animations, and a fitting soundtrack along with extraordinary rewards.

The new Jaguar Temple slot from Thunderkick casino sofware is gorgeously portrayed across 5 reels with 3 rows and 20 non-adjustable paylines. Players will also be treated to an assortment of captivating bonus features, including Jaguar Wild symbols, Bonus Game Scatter symbols, Expanding wild symbols, and Free Spins along with a top paying jackpot prize worth 5,000 coins.

It should come as no surprise that the Jaguar is the most important symbol in the game. Portrayed in solid gold with pink jewels for eyes, the Jaguar symbol can either appear as a 1x1 symbol or as a giant 3x3 symbol on reels 2, 3, and 4 during any base game spin. The Inca Priest will act as the game's wild symbol, standing in for all standard symbols on the reel set, except for the game's scatter symbol.

As previously stated, the solid gold Jaguar is the highest valued symbol on the reel set, paying a generous 5,000 coins when 5 are displayed on an active payline. You will also find a host of other vibrant symbols, including fish, rabbits, dogs, and birds. Like most online slots, the lower valued symbols are displayed with playing card suits, such as gold spades, red hearts, green spades, and blue diamonds.

Where to Play Jaguar Temple Slot

The new Jaguar Temple slot was released on 19 September 2018 and will be available at all Thunderkick casinos. With a return to player ratio of 96.1%, we at Grizzly Gambling recommend that you play the new Jaguar Temple slot at Tropezia Palace Casino where you'll be treated to a marvellous welcome package along with a wide variety of payment methods and an array of other top-quality casino games from several of the world's leading software providers.