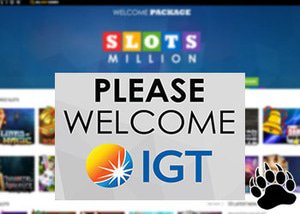 As of April 2018, Slots Million Casino will be home to IGT slots, allowing online players to indulge in even more reel-spinning action.

The addition of IGT slots at Slots Million Casino will give players access to more than 90 different slots and the vast majority of IGT slots have been designed to operate on both desktop and mobile devices. IGT is one of the largest providers of online slots and has developed some of the most popular slots ever imagined, including slot games based on major franchises and brands, such as Star Trek and Monopoly.

The company is also associated with well-known names in Hollywood with a large variety of movie-themed slot titles, such as Godzilla, Indiana Jones, Sex and the City, Ghostbusters, The Dark Knight, Grease, The Hangover, and Breakfast at Tiffany's. Players at SlotsMillion Casino will also be treated to television-based slot titles, including these popular slots:

The History of IGT

IGT, also known as International Game Technology, was established in 1975 by William. S. Redd with headquarters situated in Las Vegas, Nevada. Even though the company started out as a small, privately-owned company during the 1950's, it experienced rapid growth during the 1980's when it eventually went public.

In 1984, IGT entered the world of gambling after acquiring Electronic Data Technologies and was one of the first companies to start promoting Frequent Player rewards as well as computerizing the tracking of player data. Thereafter, the company introduced several casino gaming concepts such as S-Slot, making the company's entry into the world of slots as well as various products, such as Megabucks slot machines which allowed players to win enormous jackpots worth $1 million.

In 1991, the company was listed on the New York Stock Exchange and formed IGT Europe which catered to customers in the European region. Since then, IGT had been listed under the S&P 500 index, expanded into the Canadian, Mexican, Russian, and Macau gambling markets, and launched the world-renowned MP series and the Fort Knox bonus system.

Slots Million Casino is no stranger to treating players to a great time. First-time players can sign up and claim a welcome bonus of 100% up to $100 on their first deposit, plus 100 free spins on selected slots. The bonus is subject to wagering requirements.