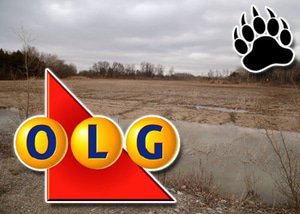 On Tuesday April 12, 2016, it was announced by the Ontario Gaming East Partnership that they will build a gaming and entertainment facility and it will be named Shorelines Casino, Peterborough.

The location will be at 1400 Crawford Drive which was one of four areas originally considered by the city four years ago where a new casino could be built. The new Crawford Drive location will feature slots rehoused from Kawartha Downs as well as table games, along with other attractions.

The new Shorelines Casino, Peterborough will be run by private operators British Columbia based Great Canadian Gaming Corp. On Tuesday Chuck Keeling spokesman for the corporation said that all of the 150 slot jobs at Kawartha Downs would now be moved to the new location along with a further 150 jobs added as well. These additional jobs will be required to facilitate the table games planned as well as the restaurant, and the opening ideally will be some time in 2017, subject to how fast the rezoning happens.

In spite of this recent news, Chairwoman of "No Casino Peterborough" Sheila Nabigon-Howlett, still believes it may not happen and is still not a done deal, since there has been a municipal election since the council voted on hosting a casino. She is hoping that maybe the debate could be re-opened with a new council vote, although Mayor Daryl Bennett states he sees little benefit in having to go through the motions one more time, "We're looking to create new jobs and spur new business," he said.

Cavan Monaghan Township have accommodated the slots in Fraserville since 1999 at Kawartha Downs. Scott McFadden, Mayor said they tried to keep the gaming operation by advanced rezoning to accommodate table gaming. Now it appears the township will lose around $3million in annual slot revenue, money which would have been used to fix bridges and roads.

Although theoretically harness racing will remain at Kawartha Downs, a disappointed McFadden believes that horse racing without having the slots might not be viable. Meanwhile the disappointment is shared by Terry Guiel, downtown BIA executive director as well.

He said: "We believe that a casino on the periphery of the downtown - especially if it includes a hotel, conference centre, restaurant and entertainment, will be hugely detrimental to the downtown," However he added that the DBIA will robustly oppose the city's efforts to put a casino "where it doesn't belong." It appears a few more hurdles still remain before the Shorelines Casino, Peterborough, is cast in stone.