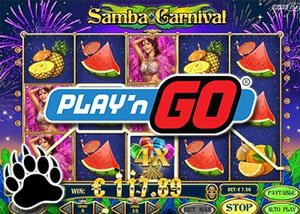 Further slot game reveals have taken place as ICE 2016 continues. This time it is the turn of Play'N Go who debuted their new slot machine, Samba Carnival.

If you are a slots fan or part of the growing online gaming industry, Play'N Go are inviting you to see their new Samba Carnival slot which is on display at their stand - N6-340 at ICE 2016. They are excited and delighted to be able to show off Samba Carnival with its thumping exotic beats and pumping rhythm of Rio and they are sure slots players will love it too.

Samba Carnival is a 5 reel, 15 payline slot machine that is sure to get your heart pumping. It features a colorful parade of exotic performers with some great prizes. The game itself features beautiful wild musical maracas that can substitute for other symbols to help you create winning combos that are worth 2 to 5 times their value. There is also an optional gamble function that can help players increase their winnings even more. Choose this feature and you will have to guess the color or suit of a masked card. When three sets of drums appear you can bang on any of them to win up to 150 times your total wager.

Samba Carnival has a 95% return to player percentage (RTP) and has been released simultaneously in both HTML 5 and flash making it available for desktop and mobile gaming.

According to Martin Zettergren, Chief Operating Officer of Play'N Go, Samba Carnival with its exotic fruit, feathers, and eye-catching fashion will bring players to the centre of Rio's most exciting party. He also went on to say that this new slot has the best-in-class graphics, sounds, and animation and they can't wait to see players samba their way to success.

Samba Carnival is the second slot release from Play'N Go so far in 2016 and follows in quick succession of their latest release Riche Wilde's adventures via Book of Dead.