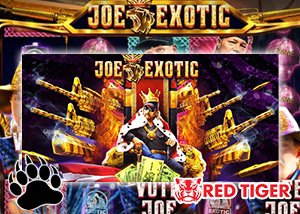 The television industry is bursting at the seams with larger-than-life characters. However, only a few of them can match the oversized impact we received from Joe Exotic. Nicknamed the 'Tiger King', Joe Exotic was first introduced to the world in a documentary by Louis Theroux. He transformed into a global phenomenon in the Tiger King: Murder Mayhem and Madness series on Netflix based on the Greater Wynnewood Exotic Animal Park. Since 2019, Joe Exotic has been in jail on 2 charges of murder for hire and 17 counts of animal abuse.

Red Tiger Gaming casino software decided to make an official video slot based on the outrageous character called Joe Exotic. The design of the new Joe Exotic slot is as bizarre as its star and players can expect an abundance of guns, gold, and exotic animals. It also comes equipped with a hillbilly soundtrack that further fuels the strange atmosphere of the game. With 5 reels, 4 rows, and 20 paylines, you will also have access to extraordinary bonus features, including a Dynamite feature, a Tiger Bounty feature, an Election Time feature, and an Exotic Spins feature along with a top prize worth 4,117x your bet size.

This is a randomly activated feature that can be unlocked during the base game, or the main bonus feature infused into the game. When the Dynamite feature is activated, it will detonate an explosion on the reels, eliminating all low-paying symbols. Thereafter, a cascade will occur that will exclusively provide high-paying character symbols to hopefully create a huge winning opportunity on the reels.

The golden tiger head will represent the tiger bounty symbol and will only appear on reels 1, 3, and 5. You will need to display 3 tiger bounty symbols in a single spin to unlock the Tiger Bounty feature. Once unlocked, Joe Exotic will present Allen Glover with four cash prizes equal to 5x, 15x, 25x, or 50x your bet size. Allen Glover will either pick again or collect. Whichever prize Allen Glover collects is the prize you'll receive from the feature.

To activate the Exotic Spins feature in the new Joe Exotic slot, you simply need to land an Exotic Spins scatter symbol on the first, third, and fifth reel during the same spin. Once activated, you'll be rewarded with 9 free spins. Once the free spins get underway, you'll notice a Joe Exotic Super Multiplier Wild symbol on the center reel, covering all symbol positions on reel 3.

The stacked wild symbol will also come with a multiplier value that starts at 1x. Every time you trigger a winning combination, the wild multiplier will increase by 1x and will continue to increase up to a maximum of 15x. Should you be lucky enough to land two Exotic Spins scatter symbols on reel 1 and 5, you will receive 5 additional free spins. You can receive unlimited free spins in this manner.

The symbol selection in the new Joe Exotic slot will remind you of all the outlandish characters and items from the Netflix series. The reels are home to five characters along with four items from the show. Joe Exotic is obviously the most rewarding symbol on the reel set, providing a top prize worth 200x your stake when you display five Joe Exotic symbols on a winning payline.

You'll find 11 different bet denominations in the new Joe Exotic slot from Red Tiger Gaming, giving you the freedom and flexibility to set your desired bet amount, regardless of your pocket size. The smallest bet you can make in the game comes in at $0.20 a spin, while the highest bet amount peaks at a maximum of $20.00 a spin.

There are also plenty of additional features you can benefit from during your gaming sessions, such as the Turbo Mode located directly next to the spin button, and an Autoplay feature where you can set your loss limit as well as the ability to stop when a bonus feature is triggered. You can also disable the sound effects if you don't want to hear the hillbilly soundtrack while you spin the reels.

Where to Play the new Joe Exotic Slot

The new Joe Exotic slot from Red Tiger Gaming is available at a wide variety of online casinos. However, we suggest that you play the new slot at Spin Samurai Casino as newcomers are entitled to a 100% match bonus up to $1,000 to get things started. The Joe Exotic slot offers a 95.70% RTP and is highly volatile, so the bonus will come in handy while you wait for big winning opportunities to come your way.