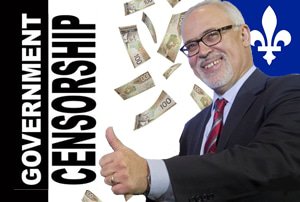 In an effort to curb play with foreign sites and boost its own online gambling revenue, Quebec wants legislation to force ISPs to block foreign gambling sites.

In Canada, the provinces can run government-operated online gambling sites, but they cannot license outside companies to run the games for them. Along these lines, the government-operated games can't really compete that well with the games from foreign operators because they're simply at too much of a disadvantage in terms of experience and popularity. As a result, sites like Loto-Quebec's Espacejeux haven't done particularly well in terms of market penetration. However, Quebec is looking to do something about that.

This week, Quebec announced that they will be seeking legislation that will force Internet Service Providers into blocking access to a list of online gambling sites that it provides. This is an exceptionally bold move, but the idea is that blocking access to foreign sites would force people to play with Espacejeux or to go without playing. Since Loto-Quebec's revenues have been falling for a few years now, it seems like this is a measure to help prevent further decline.

While a lot of people are obviously going to be up in arms about the prospect of forcing ISPs to block certain sites on the basis of the free flow of information, there are other interesting legal components to this development as well. The Canadian internet guru Michael Geist suggests this plan may be illegal as it amounts to government censorship for commercial gain and that legal challenges were likely from a coalition of diverse free speech supporters.

Conflict of Interest with Amaya

First of all, consider the position that the provincial governments are in because of the federal laws on how they can operate their games. From a purely logical standpoint, Quebec would much rather license already-established companies, take a fair cut of the proceeds and be done with it. However, they aren't able to do this, and it means that their revenues aren't anywhere close to what they could be. So even though a measure like this one might not even be legal or be able to get passed through the legislature, it's important to realize that it's only the natural and logical follow-up to the laws that they have to work with. If nothing else, it will bring attention to the fact that federal online gambling laws in Canada need to be updated to reflect the reality of the situation. Another potential challenge facing the Quebecois government could come over questions of jurisdiction, as telecom regulations are a federal matter, although Quebec is likely to claim that gambling issues are a provincial responsibility.

Quebec does claim that casino sites that wish to continue catering to Quebecois players could possibly reach an agreement with the RACJ (Alcohol, Racing and Gambling Board). No further information is available at this time about how this might work and who would be eligible. This provincial stance appears to open the door for Amaya, technology provider to Espace Jeux, to launch Poker Stars in Canada. That would certainly be welcome news, but what about Jackpot City and all of the other great Microgaming sites? Is a provincial governement that is currently paying over 11% of all tax income solely on debt management (interest) going to be willing to share their slice of the gambling pie? Its unlikely. Quebec is by far the most indebted province both as a share of GDP (50.0%) and per person ($22,230). In our eyes, these manouvers reek of desperation and incompetence more than fascist leanings. Stay tuned, this is far from over.