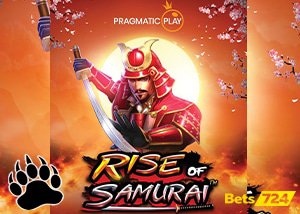 Join a band of Japanese warriors while playing the new Pragmatic Play slot at Bets724 Casino, complete with a Tumble feature, a Multiplier Wilds feature, Free Spins, and more.

Like most slots developed by Pragmatic Play, you'll struggle to find something to complain about while playing the new Rise of Samurai MegaWays slot at Bets724 Casino. The slot is based on Japanese samurai warriors and the graphics and animations come equipped with a traditional feel to further enrich your online gameplay experience. A gentle and classical Asian-style soundtrack is embedded in the background, perfectly complementing the theme and atmosphere portrayed in the game.

The new Rise of Samurai MegaWays slot from Pragmatic Play casino software is driven by 6 reels and 7 rows along with the opportunity to unlock up to 200,704 ways to win on the grid. Players at Bets724 Casino will also be treated to an extraordinary selection of bonus features, including the Tumble feature, a Multiplier Wilds feature, a Free Spins feature, an Ante Bet feature, Multipliers, Wild Symbols, and Scatter Symbols along with a satisfying payout of up to 5,000 times your bet size.

The new Rise of Samurai MegaWays slot takes place in a beautiful Japanese garden, while the reel set is infused in a traditional temple with gold trimmings. Players will be greeted by several unique bonus features to keep them entertained for hours on end, ranging from a Tumble feature and Multiplier Wilds feature to a Free Spins feature and Ante Bet feature.

You can also benefit from an extra investment that will double your chances to active the free spins feature in the game. However, the Ante Bet feature will require an additional bet. For instance, a normal bet might cost you $1.00, while an Ante Bet will set you back $1.25.

The new Rise of Samurai MegaWays slot offers a sensational selection of slot symbols to keep you playing for hours on end. You will find several samurai warriors as high-paying symbols along with multiple coin symbols as low-paying symbols. The most prized symbol is the red samurai, increasing your bankroll by up to 20 times your stake when you land five red samurai's on a single payline. The purple samurai warrior will provide a top prize worth 3.75 times your stake when 6 form part of a winning tumble.

Pragmatic Play made it possible for just about anyone to enjoy the new slot on both desktop and mobile devices thanks to a broad selection of bet options. The game gives you the ability to adjust the bet multiplier, coin value, and the total bet. This gives you the flexibility to choose between 39 bet options, ranging from $0.20 a spin up to $100.00 a spin.

You will also be able to take advantage of extra features to further enhance your gaming experience at Bets724 Casino. This includes an autoplay feature where you can set the number of autospins and when it should stop, such as cash decrease by, single win exceed limit, and cash increased by. You can also adjust the game volume and reduce the animation quality if you want to save battery while playing on your mobile device.

Where to Play the new Rise of Samurai MegaWays Slot

Pragmatic Play's new Rise of Samurai MegaWays slot comes with a return to player ratio of 95.69% and is an extremely high volatility game. The game is avaialble at several Pragmatic Play online casinos but we recommend that you play the new Rise of Samurai MegaWays slot at Bets724 Casino as newcomers are welcomed by a 100% sign-up bonus up to $300 in their initial deposit.