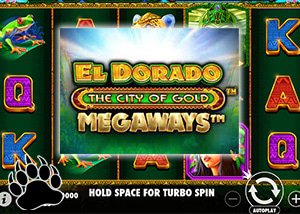 Search for lost treasure in a jungle while playing Pragmatic Play's new slot at Casumo Casino, complete with a Tumble feature, a Free spins feature, multipliers, scatters, and more.

The lost golden city is the inspiration for the new slot release from Pragmatic Play, giving players the opportunity to hunt down lucrative rewards in a tropical jungle surrounded by pyramids. The slot is called El Dorado the City of Gold Megaways and it's based around El Dorado, a 16th-century Spanish conquistador who was covered in gold dust as an initiation rite by a mythical tribal chief. The events occurred in central America where players can explore the golden city while spinning the reels on this innovative new slot at Casumo Casino.

Once you reach the lost golden city in Central America, you'll be greeted by a tropical forest surrounded by pyramids on either side of the reel set. All symbols are portrayed on blue tiles with a fully transparent control panel to make your gaming experience as immersive as possible.

The new El Dorado the City of Gold MegaWays slot impresses with a fantastic variety of theme-related symbols to further enrich your reel-spinning adventures in the jungle. The tribal female is the most valuable symbol in the game, providing a top payout worth 50 times your stake when you display 6 tribal females on a winning payline. The leopard is the second-most rewarding symbol in the game, boosting your bankroll by 5 times your stake when 6 leopards land on a single payline.

If you are searching for an online video slot with loads of flexibility and freedom when it comes to setting your bet amount, you don't have to look further than the new El Dorado the city of Gold MegaWays slot from Pragmatic Play. You will be able to adjust your bet size and coin value in the game. The coin values range from $0.01 up to $0.50, while the bet sizes range from 1 through to 10. This will give you a minimum bet value of $0.20 a spin along with a maximum bet value of $100.00.

The new Pragmatic Play slot also offers a wealth of additional features, including an Autoplay feature, sound settings to adjust the ambient music and sound FX, as well as game history to evaluate your gameplay after playing for hours on end. You will also find a battery saver mode that will reduce the animation speed, making it a great game for mobile play while you are out and about.